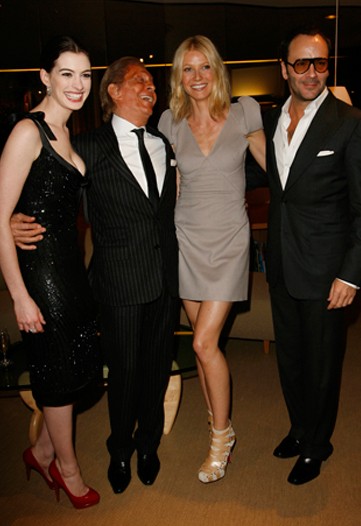 As red double-decker tour buses and stretch limos glided through the intersection of Rodeo Drive and Dayton Way here Thursday, Valentino stood at the base of the cobblestone Via Rodeo to be honored as the 13th recipient of the Rodeo Drive Walk of Style Award.

Anne Hathaway introduced the designer, recalling the time she has spent with him in the last three years since they met during the filming of “The Devil Wears Prada,” in which Valentino had a cameo as himself.

“Shortly after that, I was invited to be his date at a gala,” Hathaway said. “I knew it would be a great challenge to be perfect in Valentino for Valentino. At my first fitting, I put the dress on backwards. Luckily there were strategically placed sequins.” She singled out his “bright eyes of a dreamer, his curiosity, strength and fervor.”

Upon presenting him with the Robert Graham designed “Torso” statuette, Hathaway said, “Because of his friendship and influence on me, I am a Valentino creation.”

Valentino stepped to the podium, saying, ”I am completely drunk with compliments. In my long career, I have more or less refused other people saying nice things about me, but now that I am older, I accept this.”

He said Beverly Hills is “a city very much responsible for me becoming a fashion designer.” As a child, Valentino was captivated by Hollywood’s stars, and when he began to open stores, Rodeo Drive was at the top of his priority list. “Today, it’s the most important fashion street in the world. Maybe one day I’ll be back to get another prize.”

The presentation — Giorgio Armani, Tom Ford and Manolo Blahnik are among previous Walk of Style recipients — capped a two-day whirlwind for the designer. On Wednesday, the Matt Tyrnauer-directed documentary “Valentino: The Last Emperor” had its West Coast premiere at the Los Angeles County Museum of Art. Guests included Ford, Joan Collins, James Galanos, Rita Wilson and several of Valentino’s one-time models, such as Janice Dickinson and Kelly Lynch.

“I have watched every collection for the last 32 years and there has never been a bad one,” Dickinson said. “He’s a genius. I own several Valentinos and putting them on just changes you. You become ultrachic and ultrafeminine.”

“Part of my mission tonight is to talk him into working again,” Lynch said. “He cannot retire. An era is over, and it’s some of the greatest things I’ve ever worn.”

In Valentino’s creations, “I feel like I am wearing a piece of armor, and I feel protected and stronger,” Hathaway said. “When you put something on like that it makes you do all the things you are supposed to do: stand a little straighter and feel a little prouder and smile a little bigger.”

Hathaway said she begged Valentino to come out of retirement to design her Oscar dress. He didn’t, and the actress wore Armani, but she said, “I think now that he is retired we appreciate him that much more.”

Although Valentino said he misses designing the collections, he has moved on. “I have very beautiful life, thank God, and what I am going to do now is some costumes for the opera.”