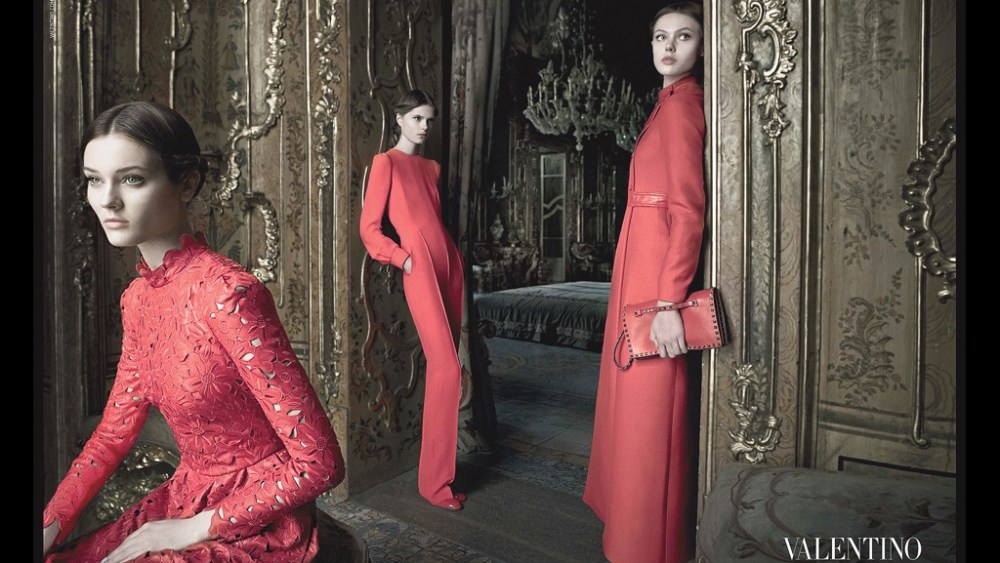 Valentino Garavani’s gregarious nature and personal extravagance were initially the brand’s greatest advertisement. With a permanent tan evocative of yachting in the Mediterranean or ski trips to Gstaad, the designer was often seen with his troupe of tail-wagging pugs, or entertaining beautiful friends at his Château de Wideville outside Paris. His fondness for a particular shade of red, which he splashed across cocktail dresses and evening gowns, was also well-known.

Since creative directors Maria Grazia Chiuri and Pierpaolo Piccioli took the reins at the house in 2008, they have carefully channeled the Italian maison’s original glamour into collections with a modern sophistication, and the corresponding ad campaigns mirror this evolution. Absent is the heavy makeup favored in previous years; theirs is an understated beauty though still emphasizing luxury.

“We reject the concept that there is a separation between the images and our products: what is in the stores is in the ads,” Chiuri said.

Decades after Marisa Berenson gazed doe-eyed at Vogue readers in a white dress with floral appliqués, Valentino remains a recognizable brand, thanks partly to the many celebrated photographers who have crafted its campaigns. Here’s a look at some of the names behind the lens.

In the Sixties, Barbieri shot a series of photos of model Mirella Petteni in voluminous dresses, vibrant coats and sparkly earrings against a startling desert studio backdrop. With her charcoal-smudged eyes and perfectly coiffed hair, Petteni was faithful to Valentino’s ideals.

In a 1965 interview with WWD, Garavani said, “Women of today have a duty to be soignée. They should be well made up, absolutely wear lipstick — I detest women without lipstick — and be well coiffured, not running around with [hair] dangling straight as if they just finished a home shampoo.”

Best known as the envelope-pushing photographer behind a series of politically sensitive Benetton campaigns, Toscani also worked for Valentino. A shot for the brand’s spring 1986 ready-to-wear collection showed a playful young woman with cropped blonde hair jumping toward a young man with his lips puckered in a kiss, with the International Herald Tribune in one hand and his sweetheart’s in the other.

Toscani also produced a tongue-in-cheek picture of the same young woman with a polka-dotted Valentino skirt blowing up behind her, where a quintet of young men stood politely smiling.

Ritts’ contributions to Valentino in the mid-Nineties featured a statuesque Christy Turlington, occasionally surrounded by a bevy of naked male admirers. The images’ clean lines in black-and-white — a hallmark of Ritts’ no frills style — put the emphasis squarely on the power of female beauty.

In the late Eighties, throughout the Nineties and onward, Meisel presented a colorful, decadent vision of Valentino, with models like Linda Evangelista, Claudia Schiffer, Nadja Auermann and Gisele Bündchen in cinematic campaigns.

In 2000, the photographer shot a pack of models including Malgosia Bela and Karen Elson poolside at Stahl House overlooking the Los Angeles skyline. The women were draped in jewel-toned gowns, their hair styled for Hollywood’s golden era, while a bevy of bare-chested guys sprawled across lounge chairs brandishing cocktails and cigars.

In 2005, Testino shot Gisele in a golden strapless dress standing beside a baby zebra in the company of a chiseled Will Chalker. The image was one of a series that radiated sexiness and high living.

In 1977, Turbeville shot a Valentino campaign in which a group of young women posed languidly by an old palazzo in long evening gowns.

Called back for the 2012 campaigns, the American photographer’s recent work for the brand offers the same dreamy atmosphere, with contemporary models including Caroline Brasch Nielsen, Fei Fei Sun, Ruby Aldridge and Frida Gustavsson. They appear lost in thought, draped across the tiled floor of Villa Parisi outside Rome; standing by a shadowy wall in Pozos, Mexico, or lounging at the baroque Palazzo Valguarnera-Gangi in Palermo, Sicily.

Chiuri and Piccioli have praised Turbeville’s photography for its romance and “dark modern edge.”

Said Piccioli: “We sell through emotions.”