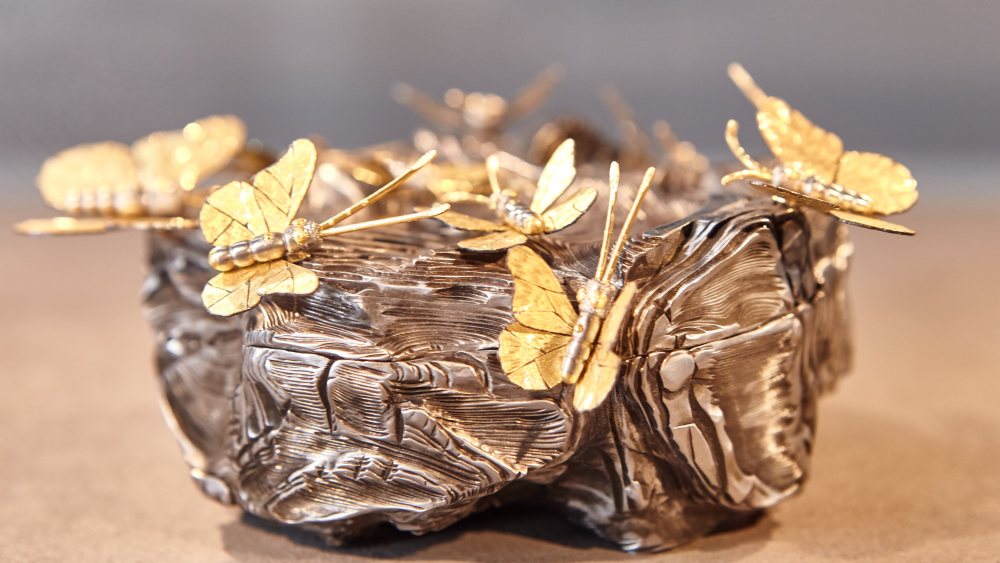 PARIS — Van Cleef & Arpels is lifting the lid on Daniel Brush with a show of the reclusive artist’s work at its jewelry school in Paris.

Brush and his wife and close collaborator, Olivia, were the guests of honor at an intimate dinner on Wednesday at L’École, the School of Jewelry Arts, where the works on display included drawings, sculptures and objects ranging from a sculpted steel-and-gold table piece to more traditional jewelry.

The “Cuffs and Necks” exhibition, open to the public from Oct. 13 to 31, features 70 cuffs and 78 chokers from two larger series, the latter created over four years specifically for a book of photographs.

It marks the first show in France for Brush, whose pieces were last on public display at the Museum of Arts and Design in New York in 2012.

“In the past 35 years, I’ve had three museum exhibits — that’s it. Nothing else. There’s no agents, no dealers, no brokers,” said Brush, who spends months at a time holed up in his studio, surrounding by the antique turning lathes and guilloché-engraving machines that he collects.

“I am available, and people can come and they can look, and every once in a while they come. So what happened in the past 30 years is I became immensely famous to 10 people, and five died,” he told WWD.

Nicolas Bos, chief executive officer of Van Cleef & Arpels, said he was interested in spotlighting a purely artistic approach to jewelry-making that is anchored in traditional know-how and craftsmanship.

“With Daniel, that is really the case. His studio is an otherworldly place — you feel like you have stepped into a Tim Burton movie. There are machines everywhere. His level of detail and precision is so obsessive that it even got me thinking that our own workshops were not that precise in certain areas,” he said.

“His vision is so honest and inspired and intense that I found it totally fascinating,” Bos added. “It shows that jewelry is not just a staid profession that sells very expensive pieces with exceptional stones, but there is this artistic dimension with a super personal universe.”

Indeed, the self-taught goldsmith, jeweler and metalworker was keen to dispel the notion that there was any commercial motive behind the show.

“This is not a trunk show. You’re getting to see some work I did over a long period of time, and I want to know what you think,” Brush said, adding that he does not view his creations as “accoutrements” but rather wants people to feel “the soul of the maker.”

“I made all these things. I was breathing when I chiseled it. I hammered at it. I want them to know that in their lifetime, they can share that with me, and ask me questions about it. That’s important to me. It’s not a quick purchase. It’s a bigger commitment for the person and for me: I’m entrusting someone to take care of it,” Brush explained.

His intricate creations blend base metals such as steel and aluminum with noble materials such as gold and diamonds, using hard-to-master techniques including engraving on steel. Brush is open to using any kind of material, from bakelite to industrial-grade metals.

“I’m a member of the Society of Manufacturing Engineers. I read NASA reports all the time. I’m interesting in everything. I’m working on a material right now that’s impossible, but I love the battle, and I can be a student all the time learning about it. It’s tungsten carbide — it’s just overwhelming,” he said.

Surprisingly, a strong humorous strain runs through his work. His series of cuffs was triggered by a run-in with a snooty woman in a restaurant that prompted him to create a bracelet engraved with the word “b—h.” Another is carved with a mouse and a slice of Swiss cheese set with diamonds.

“Look, the drawings, the paintings, the sculptures here — that’s really difficult emotionally. It’s post-war existential thought. You need a break!” Brush argued. “I want to roll on the floor laughing sometimes. It’s better for me than playing golf or drinking. That’s why I do it.”