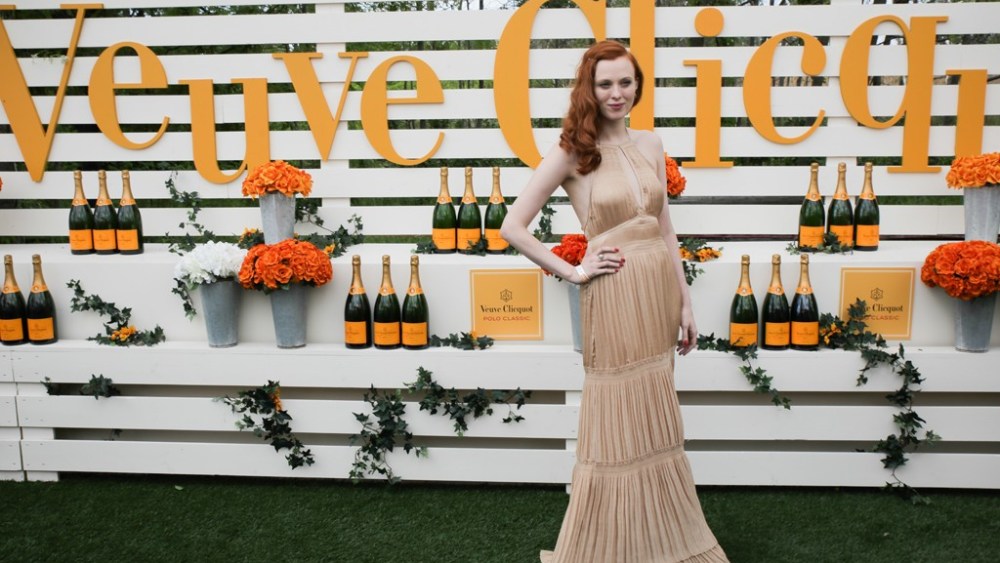 But they turned out nonetheless to Veuve Clicquot’s seventh annual Polo Classic at Liberty State Park in Jersey City — Aaron Paul and wife Lauren Parsekian, Julianne Moore, Olivia Munn, Dakota Johnson, Behati Prinsloo and Busy Philipps. It was the first time at a polo match for Nyong’o. “We’ll see,” she said. She arrived at the match’s main field via golf cart having seriously considered the aristocratic nature of the event, settling on a modified Alexander McQueen spring 2014 look that she styled with a matching handbag, black wedges and a vintage wide-brimmed hat. “I was inspired by Eliza Doolittle from ‘My Fair Lady,’” she explained.

She was joined at the park by host Nacho Figueras and wife Delfina Blaquier, Julie Henderson, Carly Cushnie, Rebecca Minkoff, Steven Kolb, Karen Elson and Mara Hoffman, who made the trek presumably lured in by the unbeatable combination of free-flowing Champagne and an excuse to dress to theme.

Johnson is now just less than eight months away from the Valentine’s Day 2015 premiere of “Fifty Shades of Grey,” in which she plays the lead role, Anastasia Steele. “I don’t think it’s something you can be prepared for,” she said of the media storm guaranteed to swathe the film’s adaptation. “I’m just going with the flow.”

Munn flew in just for the event straight from the “The Newsroom” set in Hollywood. “My brain right now is a little fried because I didn’t sleep Thursday,” the actress said. “We got whole new scenes late at night, so I kept working on it and when I looked at the clock it was 6 a.m. and I had to be at work at 7 a.m. I was like, ‘This is crazy, the words aren’t going to stick in my head because I stayed up all night.’  It worked out OK, but my brain is still fried.”

Paul arrived sporting a light gray suit. “It’s Topman,” he exclaimed. “Nothing beats Topman. Cheap suit, nice day.” Walking the red carpet, Paul appeared to be excited about virtually every aspect of the event — especially the public debut of his new, very full beard. “Hey man, you have an excellent beard,” he called out to a nearby photographer, before turning to his wife. “Angel, what do you think of my beard?”

Fueled by bubbly, revelers cheered on the players before taking the field themselves for the ceremonial divot stomping. Polo newbie Nyong’o took part in the tradition, going relatively unbothered as she posed for pictures with her brother Peter, he of Oscar selfie-bombing fame. She also graciously posed for photos with a handful of fans, though her brother stayed out of frame this time.