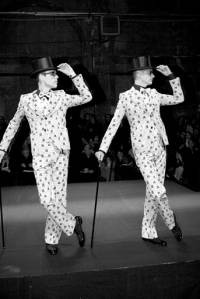 FLORENCE — After generating their share of headlines in women’s fashion for two years with theatrical runway shows and fanciful ready-to-wear, Dutch designers Viktor Horsting and Rolf Snoeren set out to do the same with their first men’s wear collection.

The designers had said they were launching men’s because they wanted to dress themselves. On Thursday night at Stazione Leopolda here during the men’s trade show Pitti Uomo, they took that anchoring idea to the literal extreme in the form of a precisely executed ballet of dressing and undressing.

In almost perfect synchronicity, the designers — stationed at opposite ends of an elevated stage — barely twitched as valets pulled cropped velvet trousers and slim one-button jackets off the rack and slipped them on the designers.

As the piano reached a crescendo and a recorded voice thick in a German accent began chanting “Viktor and Rolf,” the audience, some amused, some baffled, knew the designers were injecting their own form of wit and irony into their debut men’s runway collection.

Once dressed, Viktor and Rolf walked down the runway toward each other, mostly stone-faced, before stopping in the middle to strike a pose — hips popped, fingers meticulously placed on their horn-rimmed glasses. All the while that voice bellowed from the soundtrack: “Viktor and Rolf, VIKtor and Rolf, Viktor and ROLF.”

“We rehearsed for a very long time, but we were still very nervous,” Horsting said after the show. “It was a different feeling for us to actually be the ones wearing and showing the clothes.”

Pitti Uomo organizers invited the designers to launch their men’s collection, which is produced by Tuscan-based manufacturer Gibó. It’s the latest project in a series of measures aimed at expanding their presence. Last year, they inked a deal with L’Oréal to launch their first fragrance.

Although not as elaborate or conceptual as their women’s presentations, Viktor & Rolf nonetheless distilled their clever, hyper self-conscious aesthetic into a viable men’s line, or as they like to describe it, “the next element in the Viktor & Rolf universe.”