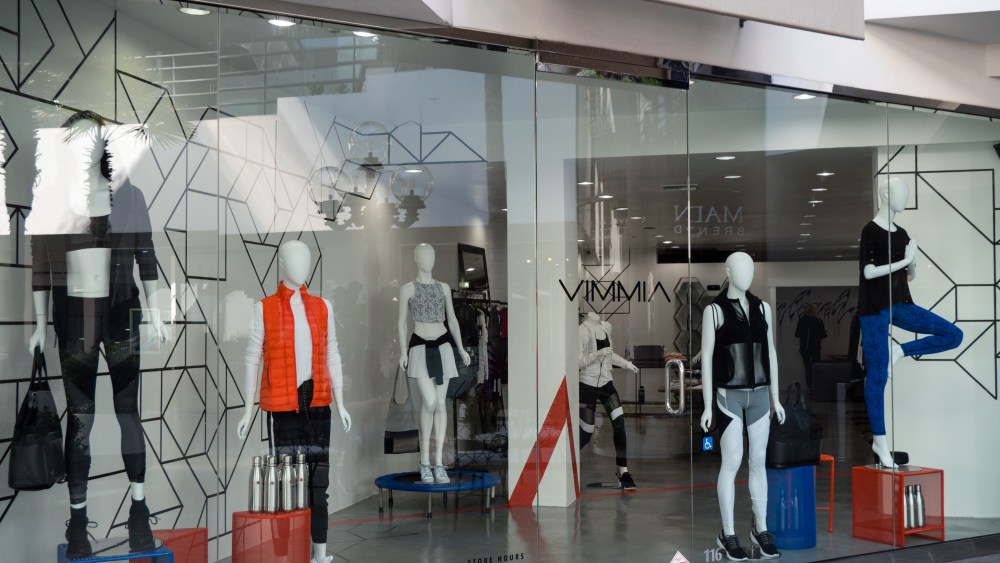 Los Angeles activewear brand Vimmia has taken the plunge into brick-and-mortar with the opening of its first store.

The label, which bills itself as luxe activewear, has been selling fashionable performance wear for men and women since 2012, first building its stable of wholesale accounts. It’s now ready to boost its direct channel with physical retail.

The company opened a more than 1,100-square-foot store at the Brentwood Gardens Shopping Center stocked with it’s men’s and women’s lines, maternity, plus size, ready-to-wear, performance line called Vimmia X and Heather collection of women’s basics. The assortment will be filled out with Puma footwear and Bkr bottles and the space also will double as a studio for various workout classes.

“We felt, especially in certain respects, the opportunity to really kind of give our brand a little bit more exposure to the areas where there aren’t as many customers or locations carrying the brand,” cofounder and vice president Alex Raminfar said. “We had a great opportunity with our current location to get in to really test it out.”

Brentwood was also a familiar market since Raminfar and his brother and Vimmia president Ardy Raminfar went to school not far from the store.

“Brentwood was always our backyard and obviously is one of the more fit and active cities that we have here in Los Angeles,” Raminfar said.

The two brothers founded the business together and remain its sole owners, first building the brand, with a lineup all manufactured locally, via the wholesale channel. Vimmia is sold in more than 2,500 doors worldwide.

In the next six to eight months the company intends to open a second retail location elsewhere in Los Angeles, more than likely on the east side. That is to be followed in the next 18 to 22 months by a store in the Dallas area, where the brand has a strong following, and within the next three years a fourth location will bow in a yet-to-be-determined location.

Vimmia, which counts roughly 40 workers, said its sales are up 64 percent since 2015, although the company declined to reveal its exact volume.

“We are merchandised and really design like an actual fashion line as opposed to the more traditional active lines,” Raminfar said. “We’re proud to have 12 distinctive collections that drop every single month. There’s nearly 200 new sku’s [stockkeeping units] that we produce a year.”

Plans also call for the company to expand into additional categories early next year, which will include towels, yoga mats and accessories.