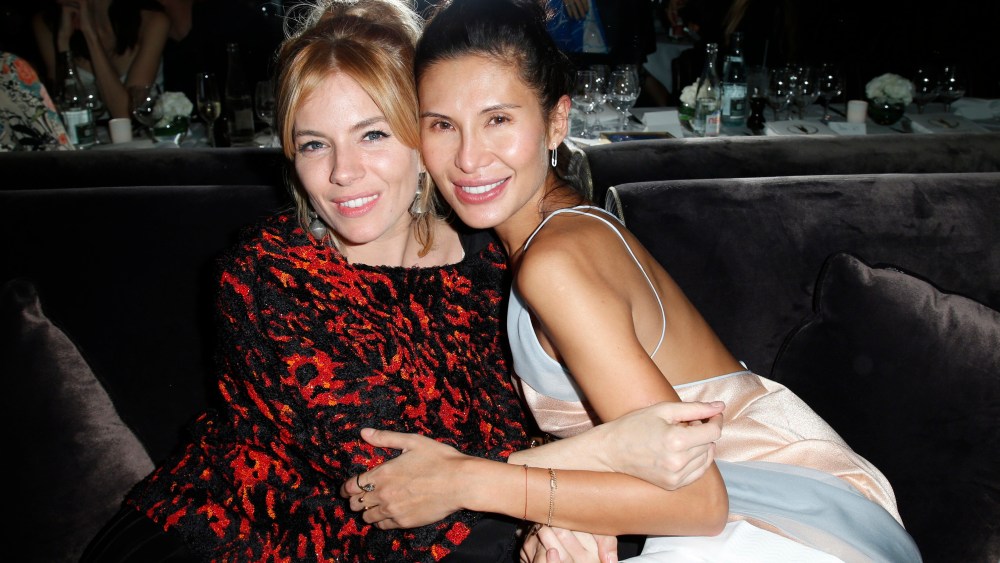 PARIS — Sienna Miller was the surprise guest of honor at a cocktail and dinner on Thursday celebrating the opening of Vionnet’s flagship store in Paris.

The “American Sniper” actress is trying to get her hair back to her signature shade of blonde after dyeing it dark red for “The Lost City of Z,” the James Gray-directed film she just wrapped.

“It’s pretty orange,” remarked Miller, dressed in a black Lurex dress that she later topped with a scarlet-and-black capelet for the walk between the boutique on Rue François 1er and nearby restaurant L’Avenue.

Her character in the movie is based on a real person: Nina Fawcett, who was the wife of Col. Percy Fawcett. “He was sent to map the Amazon at the turn of the 20th century, and she was a suffragette and didn’t actually have red hair, but that’s what we decided on for that character,” she said.

Miller’s dye job didn’t require much in the way of wardrobe adjustments, though. “I was pretty much filming six days a week, so there wasn’t much dressing and when there was, it was a tracksuit on a Sunday,” she confessed.

As guests thronged the store, Vionnet owner Goga Ashkenazi said she was relieved to have reached the finishing line. “It has come together exactly as I imagined it, which has been a long, long journey with everything possible going wrong,” she said.

Having made a fortune in oil and gas in her native Kazakhstan, Ashkenazi took control of the historic label in 2012 and has run into her share of resistance.

“We are an old brand, but we are also a new brand. People don’t realize really how difficult it is to be standing against these huge conglomerates and these big monsters of companies that have 25, I don’t know, 35 brands that are already established and they own Paris, pretty much,” she said.

Having finally secured a location in the coveted Golden Triangle of the French capital, Vionnet is preparing to open a store on Greene Street in New York before the end of the year. What with the brand staging its runway show the previous day, Ashkenazi hasn’t been getting much rest.

“In fact, I think I’m going to give up sleep. It’s a waste of time,” she declared with a laugh.