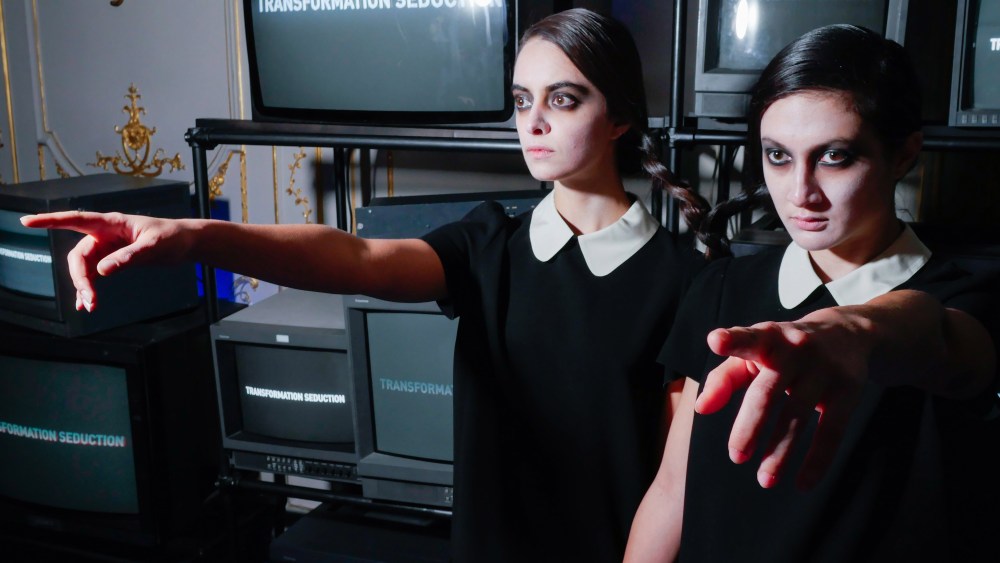 FRIGHT NIGHT: “Just chilling,” said Virgil Abloh as he wandered further into the Parisian mansion that Givenchy’s Clare Waight Keller had dreamt up to celebrate the March 5 launch of her first collection simultaneously in stores around the world, dubbed the #Givenchyworldtour. Was he speaking of his evening, or the ambiance inspired by Steven Meisel’s campaign imagery for the brand?

Eerie twins, their braids entwined, appeared suddenly in a room full of flickering screens displaying the words “now available worldwide” and the season.

Model Arizona Muse, spotted earlier in the front row sporting a coatdress from her sustainable line, now wearing a black and red striped number that would have made Wednesday Adams jealous, was taking in the “unusual party, like nothing I’ve ever seen.”

Two young children zipped past through a room with a girlish decor of frills and teddy bears — no need for alarm, they were Waight Keller’s young family. Upstairs, some gave karaoke their all while others challenged themselves at classic arcade games like Street Fighter or Space Invaders. An opera singer, perched on a bar, competed against the spooky crash of thunder that came from the inside of a room.

As Karen Elson took the stage, her red hair gleaming in the dark, the crowd, which now included Abloh, Noomi Rapace, Idris Elba and Anwar Hadid, started to assemble in a room shimmering with metallic streamers that tangled around arms and legs. There would be dancing later, with the XX’s DJ Romy at the mixing table.

A table with legs clad in tights and sporting stiletto heels started to rise up as if stretching as the Givenchy designer, who declared herself a fan of both David Lynch’s “Twin Peaks” and the hit Netflix show “Stranger Things,” cited New York in the Nineties, particularly Hell’s Kitchen where she lived, as the spookiest place she had experienced. “1992 in the East Village was kind of gritty, too,” she said.

Cordell Broadus arrived as the dancing kicked off. Slipping into the entrance draped in red curtains from floor to ceiling where a 7-foot tall butler greeted him, he noted it was all “very David Lynch.”