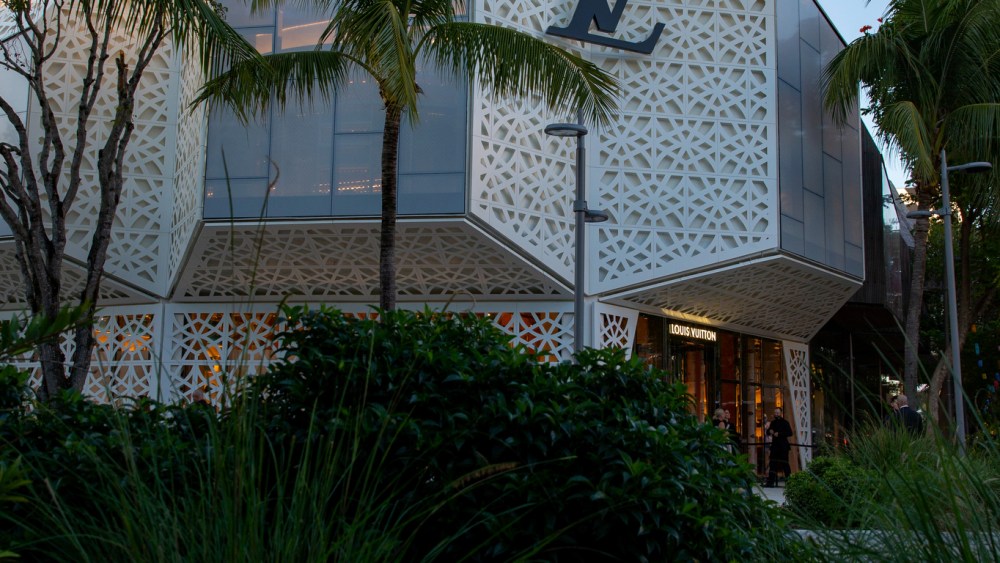 MIAMI — And now there are two.

Louis Vuitton has opened its second freestanding men’s store in the world in the Design District here, a statement-making boutique on the corner of 39th Street and First Avenue that dominates the skyline with a soaring all-white aluminum facade.

The opening on Monday evening kicked off the three days of events around the repeat showing of the brand’s spring 2022 men’s collection, which became a tribute to Vuitton’s men’s artistic director Virgil Abloh after his sudden death at age 41 on Sunday.

Michael Burke, Vuitton’s chairman and chief executive officer, said Abloh was deeply involved in the design of the two-story store, which boasts 3,586 square feet of selling space and mixes pale oak with raw concrete, stainless steel, soaring glass windows and works by local artists and pieces from the brand’s Objets Nomades collection, as well as a series of resin statues. In fact, the diamond-patterned white facade was inspired by that collection’s Diamond Screen piece by Marcel Wanders Studio.

“Virgil was obviously keen on architecture, obviously those were his origins, and getting a raw space like this was something that he absolutely loved.”

The two main challenges in the unit’s design were the angled facade — which enables it to stand out from Alice + Olivia, Ganni, Reformation and Fight Club next door as well as nearby units for the likes of Tom Ford and Max Mara — and the installation of a 27-foot-high resin statue of model Kai that stands carefully placed inside the circular staircase with only inches to spare.

The store is filled with Abloh’s fall 2021 collection — from sneakers and bags to jackets, trousers and more. There are three products exclusive to the location — a chain-link necklace with subtle LV monogram; a skateboard with a graffiti logo motif, and the prelaunch of the Tatic sneaker.

Even on opening night, shoppers packed the store, snapping up pieces from what will be one of Abloh’s last collections. The opening show on Tuesday night and the other events — which include an interactive installation of 30-foot-high resign sculptures and a chess set in Sweet Bird Plaza near to the store and LV red hot air balloons spotted throughout Miami — obviously come at an emotionally wrenching time for Vuitton executives following Abloh’s death. Burke sensitively discussed the designer’s passing, paying tribute to him by wearing a shirt from Abloh’s first collection for the brand and sneakers from his last one.

“Because that is what Virgil said he wanted me to wear,” said the CEO, who spoke with Abloh on Saturday night only hours before his death. Burke was still understandably shaken, expressing shock over someone dying at such a young age.

Even as executives scurried to tie up last-minute details of Tuesday’s show — which Burke said would be “very emotional” for all — the CEO gently discussed in an exclusive interview what might lie ahead for Vuitton’s men’s collections in light of Abloh’s death. His first focus is on the next few days with the show, as well as Abloh’s funeral, which could take place in Chicago late this week.

“The January show is 95 percent complete, so it’s really June,” he told WWD. “Virgil was very organized, although he was capable of immense changes all the way through the last minute. He was very demanding; beneath this jovial, very genial demeanor he was very demanding. Contrary to Karl [Lagerfeld, with whom Burke worked when he headed Fendi], he didn’t know when to stop. Karl knew a month before the show — that’s it, his job is done.

“Virgil had five different shows simultaneously in his mind — he never stopped. That’s one thing I would try to explain to him. And Off-White is the same issue. People would ask, ‘Michael, how do you handle this?’ And I would say, ‘Take his pen away.’ He would continue to design up to an hour before the show. It’s fascinating, but for the teams it’s very demanding. But the last few seasons he was more aware of that and, for the rest of the team, the aftereffects. Which allowed for the shows to be more complete.”

Asked, though, how Burke will deal with potentially finding a successor for Abloh in time for next June’s show, he waved his hand dismissively. “It’ll be solved.

“We have such positive energy, such speed, kinetic energy. This company is driven by kinetic energy. When you see how fast people can do things.…The entire studio is coming over tomorrow [for the show]. They have enough food for — oh, jeez, they don’t have to worry about June. First of all, everybody’s shocked, utterly shocked.

“The important thing in the last half-dozen years is that Louis Vuitton has proven that it is a luxury brand and a streetwear brand and both can coexist. And we’ve proven that the entire company can get behind and partner with very diverse geniuses. It’s not just Virgil or Nicolas [Ghesquière]. You have Francesca [Amfitheatrof, artistic director of watches and jewelry], you have Jacques [Cavallier, the brand’s master of perfumes] — he’s the best nose in the industry. Francesca, I think, is one of the best fine jewelry designers in the world. So all four are extremely different and there’s no question as to whether we can have four, three or two designers.

“That was a question mark as recently as two years ago. We’ve answered that question: Yes, we can do it and we’ve done it. That makes for a much more fertile ground for the next generation of designers. This is one thing we’ve been able to do is to make this permanent energy shift. A couture house, to this day, a real couture house, it feels like it has to close when the designer dies.

That stems from the design teams that Vuitton has put into place, but also Burke’s strategy to increasingly take the brand to the local customer. The Miami store and repeat show exemplify it, as did Vuitton’s repeat show in Shanghai earlier this month for Ghesquière’s spring 2022 collection. Burke revealed Vuitton sold $7 million worth of runway looks the day after that show, offering it as proof of the validity of the strategy.

“It shows how successful we are with fashion-forward shows. It’s the secret of our success,” he said, adding that the idea that the runway was for experimental styles that didn’t sell while the “commercial” collection was in the showroom “is 20th century. The 21st century is both. We understand that our commercial success is runway.”

Appealing to local clientele, like with the new Miami store, which is a block away from the Vuitton women’s store on First Avenue, is equally vital. The original idea was to do a pop-up on the site of the new men’s store, with a new concept every one or two months, Burke said. But then the men’s business took off during the pandemic — doubling sales at the site — so the brand decided to make it a permanent store while keeping the feeling of a pop-up in its raw concrete offset with touches that mirror the city. The blue leather handrails on the spiral staircase, for instance, are meant to “evoke the Miami waterfronts,” the brand said, while the custom wall-covering pattern is by local artist Michelle Weinberg. While the store is only the second freestanding one worldwide after the brand’s Shibuya unit in Tokyo, it is the seventh men’s store in the U.S. overall.

Burke said the location of the men’s store should help expand the Design District’s offerings, and reflects the area’s growing importance as a luxury mecca. Even as fears of the COVID-19 variant omicron grow, the neighborhood’s streets were packed with shoppers throughout this week, both those here for Miami Art Basel and overseas tourists. The lineup of black SUVs dropping people off resembled the crush of a film premiere or other major social event rather than a normal day of fashion shopping.

The hubbub also represents the changing nature of the luxury consumer, Burke indicated. Geo-localization “is all Gen Z does. They don’t look at a map to find a store — they just use search on their phone to find it and go there. What that means for store locations is that there are more locations that are good. A brand like Off-White or Chrome Hearts wants to be slightly off the main streets, which is fine. It doesn’t matter because it’s the local customer. The travel-retail customer — they are looking more for stores in groups. The local customer, which is where the growth is, is less sensitive to being on a specific corner.”

As for whether this store is the second of many more men’s-only units, Burke shrugged. “We will do more but have no rollout plan. Every store is bespoke — there is no other store like this and we won’t replicate it. All our stores are based on opportunity. If the opportunity is there, we will go for it.”