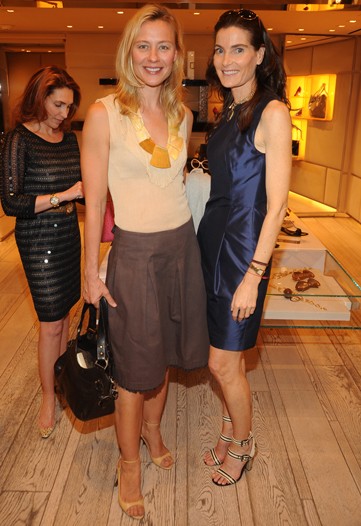 On Monday, the shopping party and dinner that Roger Vivier’s Ines de la Fressange and Samantha Boardman Rosen hosted was truly a girls’ night out. The uptown set, including Jennifer Creel, Ulla Parker and Charlotte Sarkozy, gathered first at the Roger Vivier boutique on Madison Avenue for retail therapy. While many abstained, others took the opportunity to update their spring wardrobes. “Just one pair — that’s all I need,” said Gigi Mortimer, who bought some brown sandals.

Afterward, ladies such as Marjorie Gubelmann, Jeanne Greenberg Rohatyn and Amanda Brooks went next door to the soon-to-close La Goulue. Princess Gloria von Thurn und Taxis and André Leon Talley cackled loudly at one table, while across the room talk turned to the upcoming Met gala. While gowns may have been picked out, there’s still the issue of fitting into them. “I’m on the Met diet — just air,” said Lauren duPont as the waiter set down a rich-looking roast chicken. To her credit, she ate it anyway.

The next afternoon, much of the same crew packed Chanel’s 57th Street boutique for a luncheon and viewing of the Paris-Moscou 2008-2009 collection. “We all shopped in our closets today,” declared Bettina Zilkha in a refrain that is becoming increasingly common at such gatherings.

After cocktails, guests like Jamee Gregory, Shoshanna Lonstein Gruss and Coralie Charriol Paul ascended to the third floor for tuna niçoise salads and a trunk show. And though a few in the gathering jotted down notes for their fall purchases (or wish lists), the irony of viewing luxurious furs and Lurex-hooded looks on a steamy day was not lost on Coco Kopelman. “I’m not ready to go back out in that 90 degree heat,” she said.