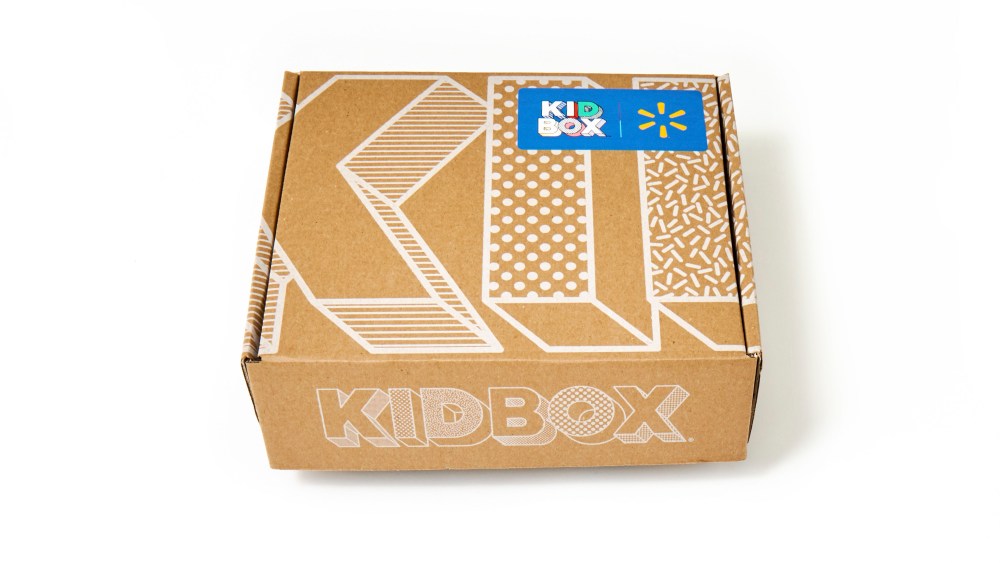 Walmart, in another move to bolster its brand assortment, has formed a partnership with Kidbox, an emerging online format sending out seasonal boxes of baby and kids fashions six times a year.

On the walmart.com web site, Kidbox has established a separate co-branded URL, walmart.com/kidbox. Banners and landing pages for fashion and kids on walmart.com flag the Kidbox site. It launched today.

For Walmart, partnering with Kidbox marks another step forward to elevate the retailer’s assortment with brands it didn’t sell before — more than 120 — including BCBG, Butter Super Soft, C&C California and Puma.

“Over the last year, we have significantly expanded our portfolio of kids’ fashion brands as part of our broader effort to establish walmart.com as a destination for fashion. Our partnership with Kidbox enables us to round out our offering with additional national and premium kids’ brands,” said Denise Incandela, head of fashion, Walmart U.S. e-commerce.

For Kidbox, partnering with Walmart means exposure to a much wider audience and a potential big lift in revenues. The deal marks Kidbox’s first strategic partnership. Kidbox launched for the 2016 back-to-school season and is backed by venture capitalists led by Canvas Ventures.

“Walmart reached out to us last summer. This was their idea,” said Haim Dabah, founder of Kidbox and a veteran of the fashion industry, underscoring how determined the retailer is to bring additional brands to its e-commerce business.

Walmart is playing catch-up to other retailers, especially Amazon, which have more advanced e-commerce operations, though the $514.4 billion mass chain has formed partnerships with other retailers aside from Kidbox to grow its brand assortment, notably Maurices and Lord & Taylor in the past year. According to Incandela, over 400 fashion brands were added to walmart.com over the past 12 months, such as Ellen DeGeneres for her women’s line EV1, as well as Sofia Jeans by Sofia Vergara.

Dabah characterized Kidbox on walmart.com as “a similar experience that mirrors ours. We want it that way.”

He also said that a second Kidbox site for jet.com and its more urban and affluent customer profile compared to walmart.com is in the formative phase. Kidbox on jet.com will have the identical assortment and pricing as Kidbox, which charges $98 for six to seven kids items per box. The baby box version charges $68 for six to seven items. Jet.com is owned by Walmart.

On walmart.com, the Kidbox offering is somewhat different. Kidbox will ship boxes containing four to five kids fashion items for $48. According to Walmart, that’s about 50 percent off the suggested retail price for the group of bundled items.

On both Kidbox and the Kidbox experience on walmart.com, newborn to size 14 in girls and newborn to size 16 in boys are offered with a range from sweaters and denim to dresses and graphic T-shirts. Parents can order a box and schedule delivery on demand or sign up for automatic shipments of up to six boxes a year timed to seasons. There’s no subscription fee on Kidbox.com or Kidbox on Walmart.

Walmart did not make an investment in Kidbox and the deal does not preclude Kidbox from other potential partnerships. However, the agreement with Walmart requires Kidbox to step up its act.

“This impacts our whole organization, including our tech team, which is laser-focused on the integration,” explained Miki Berardelli, chief executive officer of Kidbox. “We have to project merchandise and buy into it. We have also added a vice president of planning to help manage this, and we have a flex model where we bring in additional stylists during peak seasons.”

The Kidbox stylists curate Kidboxes based on a short initial style and personality questionnaire filled out by parents identifying their child’s fashion preferences, sizing, where they live, and other information. The stylists further hone their fashion selections with the support of data from machine-learning from previous Kidbox purchases.

Kidbox owns the merchandise, and handles the transaction and the fulfillment of orders placed on walmart.com/kidbox. Walmart and Kidbox have a revenue sharing agreement, the details of which were not disclosed.

Kidbox marks Walmart’s first foray into a “flexible” subscription model for fashion, though since 2014 the retailer has offered a beauty box subscription involving samples and beauty tips.

In kids, Walmart recently extended inclusive sizing across its kids’ private brands online and in its stores and launched new shopping destinations for dance essentials, gymnastics and licensed children’s clothing for tie-ins to movies and TV and gaming characters.

“We are aggressively exploring every option to create the best and broadest shopping experience for our consumers,” said Incandela. “Our consumers want expanded assortments. We are working to build all of our merchandise categories — women’s, men’s, footwear, handbags, as well prestige beauty and accessories, as well as kids.” Across walmart.com’s U.S. fashion business, “We are bringing on the brands aggressively and making select partnerships with companies that we admire. We are very much a believer in trying out new models as well.”

Kidbox, she said, “is our first experience with a subscription-like model in fashion. It’s a pretty flexible model. It allows the customer to choose the delivery frequency. They could receive the Kidbox once a year or choose six times a year.”

Between walmart.com and Kidbox, there is roughly a 10-to-15-percent overlap of brands, and it’s possible that certain brands Kidbox brings to Walmart could sometime in the future migrate to walmart.com.

“That could happen over time, but I don’t think that’s the objective,” said Incandela. With Kidbox, “It’s really about speed to market. This allows us to round out our offering with premium, national brands and incorporate stylists.”

Aside from its brand offering, Incandela said she likes that Kidbox brings an element of surprise to homes around the country. Once the boxes are received, parents and their kids typically open them together, almost as if they were unwrapping Christmas gifts.

There’s also a charity component. For every Walmart Kidbox purchased, Kidbox  clothes a child in need through its partnership with Delivering Good. The idea is to have parents talk to their kids about the importance of giving back and doing good. According to Kidbox, 76 percent of the families, once they receive a Kidbox, will have a conversation between parent and child about giving back. To date, Kidbox has donated over $15 million in new clothing to children in need. In addition, Kidbox has a kids “board” including entrepreneurial children who set up charity organizations in their communities.

“We pride ourselves on understanding kids’ fashion preferences while also creating moments for them to learn about the importance of giving back,” said Berardelli.