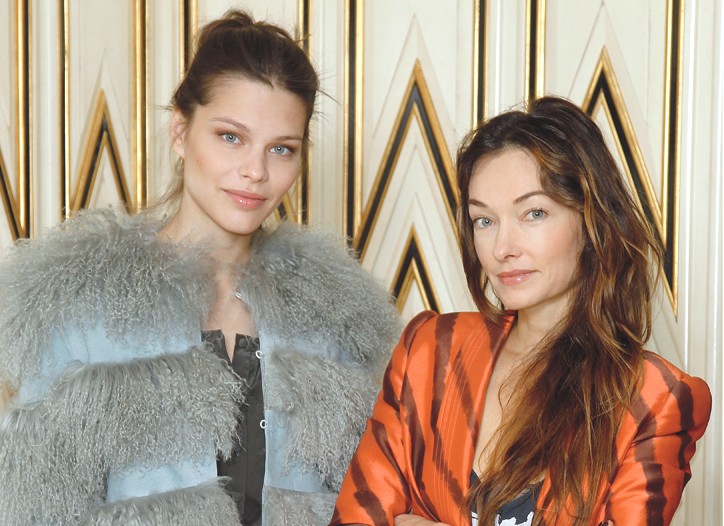 On an early Friday morning in New York City, hours before Bergdorf Goodman opens, Kelly Wearstler is already inside the store’s popular eatery, BG. It’s a place the interiors doyenne knows very well — she designed it, after all. Now, however, the restaurant has been transformed into a makeshift showroom, full of racks of colorful clothes and hair and makeup artists flittering about. Wearstler is here to talk about her newest venture, which brings her from the fashionable home to fashion itself with a collection that, for now, includes clothes, jewelry, clutches and scarves.

“I have been thinking about it for probably five years,” says the Los Angeles-based Wearstler, wearing a hand-painted orange-and-black blazer and skinny jeans from her line. “So much of my influence in interior design comes from fashion, and everything relating to fashion, from jewelry, which can be reminiscent of sculpture, to the colors and silhouettes that I find in clothing. This feels like a natural evolution.”

It’s a less common trajectory in fashion. From Giorgio Armani to Ralph Lauren and Calvin Klein, designers have made their mark on the home category for quite some time, but it rarely works the other way around, with the exception of David Hicks doing ties for Britannia in the Eighties, or, more recently, Jonathan Adler’s jeans with Seven For All Mankind. But unlike those extracurricular projects, Wearstler is striving to establish herself in the fashion industry with the same credibility she has with interior design. And she has that kind of crossover appeal that could make for a smooth transition. With model looks and a charming Southern drawl (she grew up in Myrtle Beach, S.C.), Wearstler exudes a dramatic glamour similar to that of the eclectic, bohemian-luxe rooms she designed for hotels such as Maison 140 and the Avalon in Los Angeles, and the Viceroy hotel in Anguilla.

In addition to hotel and residential projects around the globe, Wearstler also heads up a special collection of limited edition home accessories for Bergdorf’s, sold in the Wearstler-branded boutique down the hall from BG. On top of that, she has a rug line with The Rug Company, china with Pickard, fabrics with Lee Jofa, and bedding and table linens with Sferra.

When it came time to design clothes, Wearstler couldn’t help but look to an assortment of rich colors and textures that also inspire her home decor. A washed duchesse satin jacket, for one, is hand-painted with coral and slate stripes, while a gray raglan sweatshirt features hand-stitching details and a white maxidress comes with a graphic, geometric brush stroke. “When you look at the collection, it feels like it could be a few rooms in a house,” says Wearstler, who will present the lineup with private appointments next week at a SoHo loft, which, yes, she recently designed. “Each delivery has its own little voice, but works very harmoniously with the whole collection.”

The jewelry (rings, cuffs and pendants) and gemstone-decorated clutches are inspired by the stones she collects in her world travels, especially those from Brazil, Argentina and Uruguay. “Some of the detailing for the jewelry came from furniture, or maybe some sculpture we designed,” says Wearstler, who created sculptural patina brass settings for many of the pieces. “I love big jewelry, so I had to bring the scale down a little, but I still love the bigger pieces.”

To some, Wearstler is best known as a judge on Bravo’s “Top Design,” noted for her extravagant ensembles, always topped off with some outré head accessory. Don’t expect her own collection to follow suit.

“These clothes are not as dramatic as the ones I wore on ‘Top Design,’” she says. “You know what, that was fun. I have two boys and I rarely go out; I love fashion and I have all these great things to wear with no place to go. So I just thought, ‘Let me showcase them on ‘Top Design,’ and just have fun with it.’ I had the best time playing dress-up. Every girl likes to get dressed up and play with fashion.”

With closets filled with designer garb, she is hard-pressed to pinpoint her personal favorites. “There are so many,” Wearstler sighs. “There are always things in everyone’s collection that I love, but I would probably have to say Dries van Noten, because I really love his color sensibilities and his prints. I also love Martin Margiela because it’s quirky and has an edge to it.”

Wearstler isn’t a fashion designer in the traditional sense (she studied graphic design at Massachusetts College of Art and Design) but unlike the latest actor or pop star who ventures into apparel with little experience, her fashion sensibility stems from her expertise. “The method of how I work — gathering things, editing and refining them and then starting — is the same way I approach an interiors project, but of course, it’s a totally different kind of animal,” she explains. “Somebody who is in the arts is different from somebody who is an actor or a musician. [With home and fashion], there is an overlap in how you perceive things that you see and how you absorb them visually.”

The collection is exclusive to Bergdorf Goodman for fall and, come August, will be sold in a special, Wearstler-designed space on the store’s fifth floor. Suggested retail price points range from $205 to $1,395 for clothes; $155 to $995 for jewelry and $795 to $995 for bags. “Kelly lives and breathes chic — she is fashion,” says Linda Fargo, Bergdorf’s senior vice president, fashion office and store presentation. “Kelly, more so than a lot of other people who get involved in fashion and didn’t technically come up through the ranks of studying it, is genuinely, in her heart, a free-spirited fashion person.

“With people who don’t come up through the traditional schooling of fashion, there is always a certain skepticism,” Fargo adds. “Mary-Kate and Ashley Olsen probably met with a lot of skepticism, but they were able to prove themselves, and they showed a lot of commitment to it. You always worry that this could be just a dalliance for someone, a fascination for a year…a way for them to expand themselves as a brand.”

But Fargo believes that’s not the case with Wearstler, pointing out: “Kelly has a track record with us. I would bet on anything that she decided to apply her design sense to.”

Wearstler says she has been “hand-holding” the launch, visiting factories to make sure the fabrics and the constructions are up to her standards. So far, she has enjoyed every step along the garmento way. “There is something about the rawness of the factories I love,” she says. “I still will stop at the junkiest, smelliest thrift stores and crawl around on the floor looking for jewels, and I do the same thing when I go to my upholsterers, the metal factories or a foundry. I will still spend half an hour just digging around, filling up my little purse with trinkets.”