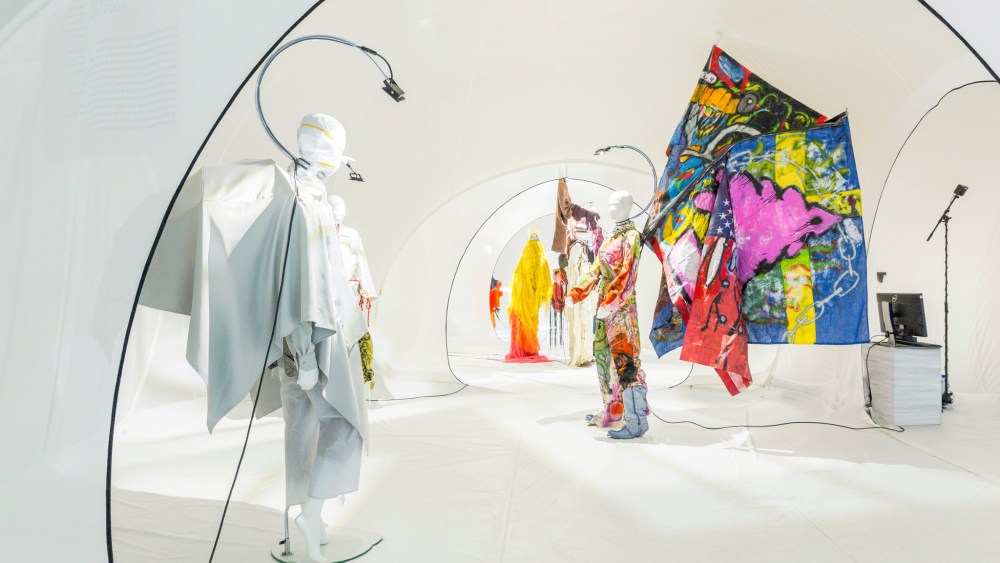 More science than art, technical textiles can be anything from innovative components for sneakers to the carbon-fiber reinforced plastics that make up about a fifth of an average airliner. Given the futuristic and highly technical nature of their business, European companies are often at the forefront of technologies and trends that will eventually impact the more mainstream apparel industry: That includes robots that sew, fabrics that feel and T-shirts that call the doctor.

Fabrics that Feel You

Over the past decade or so wearable tech has become increasingly commercially viable. A lot of the applications for touchy-feely fabrics tend to start as industrial or medical: A safety coat, developed by Portugal’s Beira University, that lights up when telecommunications workers are subjected to excess levels of radio frequencies, for example.

Garments used by medical specialists can check body temperature, humidity (and therefore liquid spillage), heart rate and respiratory activity. Should there be abnormalities, one smartphone app connected to these clothes, developed by the Tunisian company Ghetlab, will even have your shirt send an emergency message to family members or medical professionals. And increasingly manufacturers are transferring all that into commercial sportswear. The formerly medical-only outfits now also inform aspiring athletes about all of the above. Some running shirts can even count calories burned while the wearer is jogging.

This kind of communication is being enabled by a new generation of materials, tags and transmitters. None of it is bulky or uncomfortable: Germany’s Amann Group, a thread manufacturer, has been developing steel filaments that can be sewn or woven directly into a fabric like any other thread.

“These can be used to conduct heat and to transmit data, when used as an antenna for an RFID tag,” product manager Kristina Dragic explained to WWD.

The thread can also be used to replace cables and on-off switches. When displaying the tech to potential customers, Dragic encourages visitors to brush their fingertips over what looks like an embroidered “on” button. A light comes on as a result of the gentle caress — turns out the embroidery was actually a light switch sewn onto the lampshade. Another shade also responded to soft petting, the light fading in and out. There, the special threads were part of a dimmer switch.

A seamless, knitted “sensor glove” developed by two German firms, Bosch and the knitting-machine maker Stoll, uses a combination of Amann’s conductive thread, traditional knitting techniques and software by Canada’s Myant. The final product, which looks much like a winter glove with silver decoration, can be used to interface with machinery, to virtually operate robots or as part of an online virtual reality scenario. It won a prize for technological innovation at Frankfurt’s biannual Techtextil trade fair this year.

Besides lighting and communication, heat is the other property that technical textile manufacturers are taking mainstream in, for example, ski jackets. Various companies have different ways of doing this, with some working on conductive radiator-grid embroidery inside a winter jacket and another gluing miniature, printed heating elements to a garment’s interior. In the latter, the heaters are powered by miniature batteries (often about the size of a small phone) that the wearer needs to carry.

Some of these heated outfits come with more features — such as a smartphone app that allows the wearer to set a desired temperature. “The sensors then measure your body heat,” explained David Macário, research and development manager at Heliotextil and E-Print from Portugal, which makes this particular kind of a heated jacket. “If your body is below your chosen temperature — say, when you’re on the chairlift — it will produce warmth. But when your temperature rises, like when you’re skiing, it turns off again.”

Many of the elements forecast to impact the future of fashion production can be found in what is known as a “micro-factory.” Big brands are already experimenting with versions of these; Adidas has set up what it calls “speed factories” and has also run a “store factory.” Basically a miniature production line, the micro-factory can include anything from an initial personalized, 3-D design process to a virtual showroom to digital printing and robotic cutting and human tailors who will then eventually complete the product on site.

All of the elements in the micro-factory are commercially available, said Dieter Stellmach, a scientist and research manager at the German Institute of Textile and Fiber Research. Buying your own would likely cost around half a million euros. “The key is integrating it all, transferring the digital to analogue,” Stellmach told WWD. “In the past, there’s been a separation between the textile industry and clothing manufacturers but this kind of thing really blurs the lines.”

In the end, a micro-factory is also more environmentally and politically conscious, added Christian Loechte, head of Germany-based start-up Formhand, which invented a kind of suction gripper on a robotic arm. “There’s more transparency and less waste because you’re producing according to demand. And it also brings production back to Europe, where labor costs are traditionally higher.” Fear of job losses through automation is negated by such re-shoring, the experts added.

The Robots Are Coming (Slowly)

The European car industry has been automating production lines and using robots for some time and the textile industry is catching up now. The investment required for robotics makes companies cautious and although robots can now sew a simple T-shirt, there are still technical glitches. For example, robots can cut fabric based on digital design files, but if the cloth moves, the machine finds it hard to adjust and needs human help. Researchers are trying to find clever solutions to this problem, introducing artificial intelligence so the sewing robots learn from their mistakes, or temporarily stiffening fabric so it can’t move as much.

Progress is slow in some areas and faster in others. “For example, you used to need a human to provide visual guidance,” Rafael Passman, a robotics project manager with Germany’s DA Group, told WWD. “But now the camera systems are advanced enough to do it by themselves.”

Manufacturers of technical textiles are also making advances when it comes to sustainability and environmental considerations. They have developed colored dyes for cotton that use far less water alongside textile blends optimized for biodegradability. The Swedish company Coloreel has developed a proprietary embroidery technology that has the thread changing color as it is sewn. This wastes less thread and uses less dye.

There is also more attention being paid to sustainability at the other end of the manufacturing process. End-of-product-life treatments, waste water recovery and reconstitution of textiles, including polyesters, are more of a focus in the sector now, due to the desire for genuine circularity. But much more attention needs to be paid to this, researchers at the Center for European Textile Innovation said. Recycling and sorting are still far too primitive in many cases, they said.

A few years ago, the fashion industry was abuzz about spider silk and fish skin used to make clothing. This year’s entries in the headline-making materials category are cork and fungus. Previously cork waste, created when making products like wine bottle corks, was burned but the Portuguese company Sedacor has found a way to coat cotton yarn with it. The resulting product lasts longer, feels better, is hypoallergenic and has thermal properties, the company boasts.

The Picasso project, also from Portugal, uses mushrooms and other plants to dye yarn at cell-level. Usually natural dyes need to be fixed with unnatural chemicals. However, the new and environmentally friendly bio-coloration process avoids this altogether.