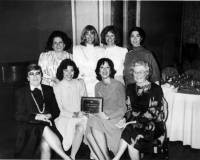 Although jewelry is worn primarily by women and often purchased by them, only recently has the gender begun to infiltrate the executive levels of the jewelry and watch industry in a significant way.

Much of that progress is because of the efforts of the Women’s Jewelry Association, which celebrates its 20th anniversary this year. What began as an informal networking group in 1983 has mushroomed into a national organization, with a range of programs and events that now counts more than 1,000 members among its ranks.

WJA now has 10 regional chapters and national headquarters in Fairfield, N.J. Its members are women from a range of occupations across the jewelry industry, including designers, manufacturers, bankers, journalists, accountants, lawyers and retailers.

“One of the best things WJA does is bring women together from all aspects of this industry,” said Susan Elliot, the dean of students at the Gemological Institute of America, who has been a WJA member since 1996. “Its gives people in different areas a chance to get to know each other.”

The WJA was the brainchild of Toni Lyn Judd, then a single mother from Boston. In 1976, Judd was hired to be a jewelry sales representative, and she and her employer agreed that she would become a partner once the business became profitable. Four years later, however, she was fired, and at that point, Judd has said, she wished she had a mentor and more peer support. At that time, there was little such support for women in the jewelry industry.

Linda Goldstein, owner of Goldstein Communications and an original WJA member who has been active in the organization since it was founded, said, “I was working in the industry in the Seventies and it was tough for women. There was no one to talk to and there were very few people to call and ask questions. It was a man’s world all around.”

“There were really fabulous organizations for men and not one accepted women as members,” recalled designer Tina Segal. “There was no outlet for us.”

Lyn and Cindy Geller, another sales rep and designer, decided to invite to lunch the female buyers of New England retailers. The women began to talk and an informal organization was formed.

In her travels through New England, Judd had compiled a large list of women in the jewelry industry, and in 1982, she and others organized the New England Women’s Jewelry Association, which was the forerunner to the WJA. Later that year, NEWJA invited other industry women to join them for a meeting during the JA Show in New York to discuss the organization and they realized the need for it extended beyond New England. In 1983, members of NEWJA had another meeting at the JA Show and it was decided that a national organization should be created and that it should be based in New York.

Later that year, at Ronny Lavin’s apartment in New York, the national WJA was formed and the organization began to officially take shape.

Gerry Gewirtz, then the editor and publisher of the Gewirtz Report, was elected the first president, and eventually by-laws were drawn up. The original NEWJA became an official chapter of the national organization, the start of a movement that would bring chapters in areas such as the Midwest, Southern California and Florida.

Much of the rise of the WJA and the changing role of women in the jewelry industry over the last decade reflects what was happening on a wider, cultural scale. Throughout the Eighties and Nineties, women began to enter the workforce in great numbers, eventually into more management positions and through the glass ceiling to the corner office. Today, the list of women who have taken over top roles in the industry has grown long, and currently includes J.C. Penney’s Beryl Raff, Zale’s Mary Forte, ABN Amro’s Anna Martin, Lieberfarb’s Ann Arnold, JJ Marco’s Julianne Jaffe, William Goldberg’s Eve Goldberg, JCK’s Hedda Schupak, GIA’s Katherine Kimmel, and The Platinum Guild’s Laurie Hudson. Phyllis Bergman, a longtime WJA member and president at Mercury Ring Corp. was even recently appointed head of what had previously been one of the prime male jewelry bastions, the 24-Karat Club.

Judd, in a recent interview, said, “The WJA created a forum in which women have had an opportunity to be more visible in the eyes of a formerly male-dominated industry.”

“Women have taken on much more high-visibility roles,” added Nancy Robey, Global Brand Director for Couture International. “They have really come to the forefront in senior and executive positions – not just the sales reps or designers but chief marketing officers and owners of the company. Even women who are in business with their husbands or fathers are no longer silent partners, she says, but are actively involved in making key decisions for their companies.”

Many high-profile women in the jewelry industry have been affiliated with WJA over the years, including Helene Fortunoff, head of the Fortunoff chain, and designers such as Cathy Carmendy, Chris Correia and Nancy Brewer of Nancy B.

Among the WJA’s key events and activities now are its annual Awards of Excellence dinner event, a biannual newsletter, two national meetings a year, a jewelry design competition, scholarship and mentor programs and a variety of chapter events held around the country. At a recent breakfast, for example, actress and former model Christina Ferrare spoke to the crowd. Scholarships have become a key activity. In 2002, WJA awarded $15,000 in scholarships to 13 jewelry students.

The Awards of Excellence dinner, which is held every year prior to the July Jewelers of America show in New York, also raises money through a silent auction for the organization’s scholarship programs. The awards now honor women in the following categories: design, manufacturer/dealer/supplier, sales, retail, marketing, editorial/reporting/publishing and special services.

Most years, an individual is elected to the Hall of Fame, which is given to a woman who has had an outstanding tenure in the industry. There is also a special category given every few years to men who have been particularly helpful and supportive to WJA, and was named for longtime watch executive Benjamin Kaiser, who was active in the WJA.

“The awards dinner gives women in the industry the visibility, the respect and the thanks for everything they have brought to the table,” Goldstein said.

Another key WJA activity is the DIVA Awards, a national contest now in its seventh year that was created to promote jewelry design by women from all walks of life.

“The idea of DIVA is to encourage women who want to design to give it a try,” said Elliot, who is the co-chair of the DIVA Awards Committee. “It is open to anyone who is a designer, whether they have a jewelry background or not.”

A ceremony is held each spring at the JCK Show in Las Vegas to honor the DIVA winners, who receive cash awards. The theme for this year’s design contest is Las Vegas, Elliot noted.

Reflecting the times, the WJA is now online at womensjewelry.org, which lists general information about the group. In addition, there is an online discussion group where fellow members can “meet” to find sources, announce job openings and ask for tips on a range of subjects.

And yet, women who were pioneers in the jewelry business marvel at how things have changed as WJA has grown from a small gathering in one member’s apartment to a potent national powerhouse. “I still chuckle about our first networking meetings, when we’d take about 20 minutes to figure out who would bring what dish to the next potluck dinner,” recalls Judd. “It makes me smile about how far we’ve all come.”