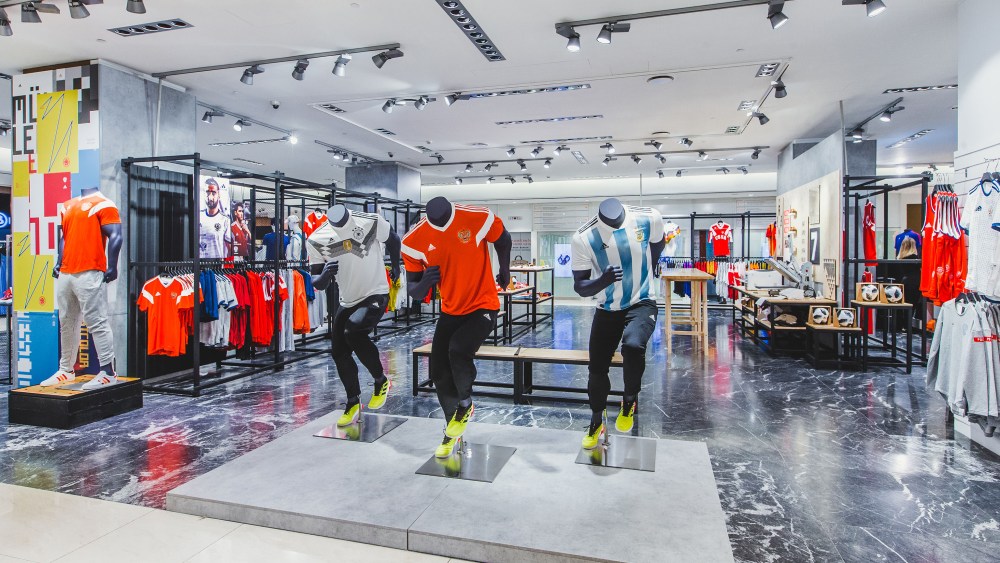 MOSCOW — Europe will soon be gripped with football fever as the 2018 FIFA World Cup gets under way in Russia today, fueling sales of fanwear and, retailers hope, tourist spending.

Russia has spent years spiffing up ahead of the tournament, with the first match scheduled for June 14 and the finals to be played on July 15.

The sporting event is far bigger than the winter Olympic Games in Sochi in 2014. In fact, it is being billed as the most expensive World Cup ever with a price tag of $13.3 billion, according to Anna Lebsak-Kleimans, chief executive officer of Fashion Consulting Group.

“It is estimated that the influence of the World Cup on the country’s economy will last for other five years,” Lebsak-Kleimans said in an interview, noting the creation of infrastructure should bolster Russia’s GDP by 150 billion to 210 billion rubles per year, with 40 million to 70 million of that due to investment and 110 billion to 140 billion due to increased tourism.

Approximately $4.1 billion of the preparation spend was allocated for the construction of sporting facilities, $6.8 billion to improve roads and transportation, and the remainder on support activities.

The tournament will take place in 11 cities: Moscow, St. Petersburg, Nizhny Novgorod, Kazan, Kaliningrad, Samara, Saransk, Ekaterinburg, Volgograd, Rostov-on-Don and Sochi. The most active center will be Moscow with around 700,000 to 800,000 extra tourists expected.

According to Euromonitor, ”There is little doubt that hosting a mega-event such as a World Cup leads to a spike in sales and activity across many industries.”

The research firm is forecasting some 21,000 visitors from the U.S., 16,000 from Mexico and 14,500 from China, which is surprising considering the U.S. and China did not qualify to compete.

Fashion Consulting Group estimates that around one million pieces of official merchandise linked to the World Cup will be sold this year in Russia, with half of them being apparel or textile products.

The projection is based on the 2014 World Cup in Brazil. At that event, more than 80 percent of attendees were interested in acquiring licensed products, with T-shirts, stuffed toys (i.e. World Cup’s official mascot), caps and key rings the most in-demand items, said Lebsak-Kleimans.

Thanks to the ath-leisure trend, sales of sportswear have been accelerating in Russia, with growth in 2017 of 10.5 percent, eclipsing gains of 9.2 percent in 2016 and 4.5 percent in 2015, according to Euromonitor. It pegged the value of the Russian sportswear market at $7.03 billion in 2017.

“Young Russians, especially females, will remain key consumers of sportswear that will drive overall growth,” Euromonitor said in a research note, which forecasts that sports-inspired apparel and footwear will remain the fastest-growing category during the World Cup. “These categories will continue to benefit from general apparel players and celebrities launching sportswear ranges offering on-trend designs and styles. Moreover, restoration of consumers’ disposable incomes of Russians and growing consumer sophistication may lead to more specific needs, resulting in the greater demand for performance apparel and footwear instead of general-purpose sportswear.”

Adidas and Nike are outfitting 22 of the 32 teams participating in this year’s tournament, versus four for Puma.

Adidas, a FIFA partner for more than 40 years, said it plans to be very active in Russia, not only providing official merchandise but also events tailor-made for fans. In tandem with the opening game between Russia and Saudi Arabia, Adidas plans to christen its hub in the Museum of Moscow — dubbed Creative Base — which is to operate throughout the tournament. It is to broadcast key games, host athlete appearances, workshops and master classes, along with music, performances and sneaker customizing.

While Russia has weathered years of tepid retail sales amid an economic crisis, the sporting event should spark a phenomenon known as “consumption enthusiasm” that often comes in tandem with long-awaited events. Citing Visa Payments data, Lebsak-Kleimans said tourist expenditure should increase around 15 to 20 percent during the World Cup.

International visitors are expected to spend between $5,000 to $8,000 in total on travel, game tickets, accommodation and the like, adding an estimated $1.5 billion to the economy. The first two industries that will benefit from the fan wave coming from different places are food and retail.

According to Lebsak-Kleimans, demand for clothes in Russia remains quite low compared to the pre-crisis years before 2014, but 2017 saw a 3 percent uptick versus 1 percent in 2016. Fashion Consulting Group’s most optimistic projection for 2018 is growth of 4 to 5 percent.

Moscow will be the showpiece city. In addition to substantial road improvements, additional subway lines were built and a new railway, the Moscow Central Ring, was added, all backed by mayor Sergey Sobyanin. The city is ready with “1,450 guides and translators speaking 28 different languages, and 810 Russian-speaking tour guides,” according to Lebsak-Kleimans.

Some of the city’s most prestigious retailers are primed for the event.

Luxury department store Tsum has added a dedicated and sumptuous marble-floored shop-in-shop with Adidas where official merchandise will be sold, including a special luxury football that is lavishly embroidered and priced around $1,500.

“We are not making any forecast, however we are positive that sales will please us,” he said, noting that Tsum’s new tax-free scheme boosted its figures this past month. “Numbers are encouraging. Thanks to the tax refunds, we can track our foreign clients. Among these, the Chinese are our top spenders. This World Cup could bring a new tourist opening for Russia, and Tsum would be their top retail destination.”

Aizel, one of the first multibrand designer boutiques to open in the post-Soviet era, plans to put the focus on local brands during the World Cup.

“Foreigners will come and I would like to give them something unique that our Russian designers created especially for this World Cup,” said founder Aizel Trudel. “We are not limited to one or two designers. Here in Russia we have plenty of talented people and they also deserve to have a chance.”

On the same street, Olga Karput’s concept store KM20 is gearing up, headlined by one of her key vendors, Gosha Rubchinskiy, one of Russia’s most famous fashion designers with links to the skating and soccer worlds.

“Everything starts with Gosha Rubchinskiy X Adidas Football collaboration. We will be the first store to launch the capsule collection. We have planned an in-store event presenting the whole range one day prior to its worldwide release,” she said.

The event is to comprise a private dinner with the designer, his backer Comme des Garçons and Adidas officials, followed by a party.

KM20 is also the official launch retailer for the Off-White x Nike football collection, which will be showcased in a pop-up installation to present products throughout the tournament.

“The World Cup is the most popular and celebrated sports event in the world so it doesn’t need any extra promotion,” she said. “It is a great honor for every country to host it.”

The sport, up to and including its spotlight in Russia, is also being celebrated with an exhibition at the Pitti Uomo trade fair, now under way in Florence.

“There is no football without fashion,” according to Markus Ebner, editor in chief of Achtung and Sepp magazines, the latter devoted to the intersection of soccer and style. He curated the Florence showcase, which runs through July 12, with Italian art curator Francesco Bonami.

“Fanatic Feelings — Fashion Plays Football,” at the Santa Maria Novella complex, puts the accent on the tight relationship between soccer and fashion and how the sport influenced the development of men’s collective imagination.

Ebner, who started Sepp during the World Cup in South Korea and Japan in 2002, has seen soccer increasingly infiltrating the fashion world, with Brazilian star Neymar attending fashion shows and Karl Lagerfeld sketching French player Paul Pogba, known for his ever-changing hairstyles, for a recent spread in Sepp.

Rubchinskiy, who hails from Moscow, and Demna Gvasalia, the Georgian-born designer of Vetements and Balenciaga, recently ignited the popularity of soccer style. According to Ebner, one key spark was the Vetements fall 2015 collection that featured a scarf emblazoned with the words “football scarf” in Russian.

“And then those football scarves started showing up everywhere. That eastern European look is at the forefront of contemporary fashion; the Russian football player look, that’s Gosha’s look, and it’s the look of the moment,” he said.

Among pioneering style icons in the sport was George Best, who emerged in the Seventies. “He was the first one, that had that Hollywood aura, talented and well dressed,” Ebner said.

Other footballer style icons featured at the show include Günter Netzer, David Beckham and Héctor Bellerín.