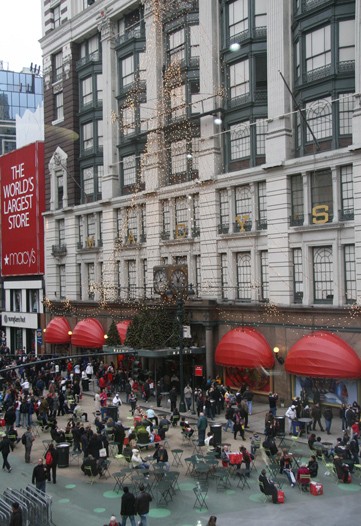 Still stressed, but not panicked. That’s the retail state of mind following the Black Friday weekend, which saw unexceptional yet decent enough traffic and sales as compared with last year’s disaster. Retailers cited pent-up demand, “frugal fatigue,” lots of self-purchasing as opposed to buying gifts, widespread doorbusters often starting at 5 a.m., and targeted price promotions.  Doorbusters in particular were at a record level — Sears alone had 599 while Macy’s offered 250 and Kohl’s had more than 300. Other bright spots: novelty cashmeres, boots, digital readers, flat-screen TVs well under $1,000, fashion items with sparkle, boxed gift sets and discounted kitchenware. Retailers also said tweeting was a significant factor, getting consumers directed on where to go for the best deals. And with myriad online promotions from saks.com to InStyle’s Web site, Cyber Monday provided a bit of digital encouragement to retail shares Monday as investors digested news of the otherwise lackluster shopping weekend, including dismal comp-store sales for the month of November.

In a move that chief executive officer Myron E. “Mike” Ullman 3rd called a “game changer” along the lines of the addition of beauty store Sephora to its mix, the Plano, Tex.-based company said Tuesday it has made a deal with Spanish fast-fashion retailer Mango to sell the MNG by Mango brand exclusively in the U.S. department store market. Billed as the largest rollout of any fast-fashion concept, the line of casual and career sportswear and accessories will launch in up to 75 J.C. Penney stores and on its Web site for fall 2010 and expand to 600 stores by fall 2011. Also this week came news of three other noteworthy design partnerships: Zac Posen will be the next limited edition designer of Target’s Go International series, Roland Mouret has done a rainbow-hued range for Net-a-porter and Sonia Rykiel’s looks for her H&M lingerie line were unveiled.  A lavish party in Paris celebrating the line saw the Grand Palais transformed into a fun fair for around 2,000 guests, complete with a Ferris wheel, a replica of the Eiffel Tower, cotton candy stands and majorettes from Croatia.

No stranger to far-flung  locales, Karl Lagerfeld showed his pre-fall collection for Chanel in Shanghai. The event featured 71 looks and took place on a custom-built barge with a glass front facing out onto Pudong’s famous futuristic skyscrapers. In an interview, Lagerfeld told WWD, “It is about the idea of China, not the reality.” The Métiers show coincides conveniently with the opening of Chanel’s new Shanghai flagship at the Peninsula on the Bund, which opened its doors last week. The new boutique is Chanel’s second in Shanghai and fifth in Mainland China. To see all the latest collections from pre-fall, click here.

Julia Roberts to Be Lancôme Spokeswoman

Pretty Woman has succumbed to the charms of the beauty industry: Julia Roberts, one of Hollywood’s biggest stars, has been tapped as the “global ambassadress” for Lancôme. Company executives declined to give further details on the relationship between Roberts and the brand, including the amount the actress is being paid to sell the products, the length of her contract and specific duties, saying more would be revealed early next year.

High fashion received another blow Tuesday as the commercial court in Paris approved a plan to convert troubled couture house Christian Lacroix into a licensing operation. A judge read the decision to a packed courtroom, setting the stage for Florida’s family-run Falic Group, majority owner of the 22-year-old firm, to cut Lacroix’s workforce by 100 to about a dozen employees, putting an end to its high-fashion and retail operations. Potential suitors — including an Ajman sheikh and French turnaround firm Bernard Krief Consulting — failed to provide financial guarantees for their relaunch plans by court-imposed deadlines. Italy’s Borletti Group, parent of Printemps and La Rinascente department stores, withdrew from the process in September. After the hearing, Nicolas Topiol, chief executive officer of Lacroix, said Falic Group would continue to negotiate with prospective buyers now that the court-observed administration period has ended. “I am working on finding a solution for the company. Everything is still possible,” he said.

Tried-and-true designers such as Oscar de la Renta and Diane von Furstenberg have their loyal followings, but a wave of lesser-known names will be cementing their presences in the months ahead. Sophie Theallet, this year’s winner of the CFDA/Vogue Fashion Fund Award, should draw some attention as she tries to make the most of her $200,000 cash prize and yearlong mentorship. The Brooklyn, N.Y.-based designer is adding knitwear to her boho-luxe label and may collaborate with Manolo Blahnik for footwear to be sold in stores. Koi Suwannagate is launching a secondary line, Lawan, in collaboration with Anthropologie. Jason Wu has added a pre-fall delivery and is creating a capsule collection for cashmere company Tse. Young designers in Brazil are getting a boost from the nonprofit Brazilian Association of Fashion Designers, which just launched a talent incubator program supported by the government that helps hopefuls land on their feet in the U.S. market.

It seems there are two bright spots in the men’s sphere: private label merchandise, and, well, women’s.  Saks Fifth Avenue’s newly launched Men’s Collection; Black Brown 1826, the Joseph Abboud-designed brand exclusive to Lord & Taylor, and Bloomingdale’s revamped private brand have all done well, and Nordstrom is testing the waters with a new men’s collection named Napoli di Nordstrom. The reason for the newfound success? Private brands, long viewed by retailers as an opening price point classification business, have undergone a transformation. Instead of just slapping a label on a lower-price dress shirt or sweater, retailers are creating full collections and devoting considerable resources internally to ensure their success — for example, hiring marquee designers and managers to oversee them. Meanwhile, having realized many women sport its clothes, Dior Homme will unveil a denim line for women in the spring. Christian Dior president and chief executive officer Sidney Toledano told WWD earlier this year the label’s jeans were a growth category despite the economic downturn.

The rapper-turned-mogul reflected on 10 years of Rocawear, which he says he does not see as a celebrity brand. As he put it, “We make a damn good pair of jeans.…That’s why people buy them.” That said, the company’s famous advertising may also have something to do with it. In addition to Jay-Z himself, the label has shot plenty of big names for its campaigns, including Naomi Campbell, Kanye West, Ciara and Victoria Beckham. Photographer Mark Seliger has been a regular behind the lens for Rocawear campaigns, often traveling all over the world for the right images. See spring 2010 looks from the line.

One of the world’s most famous and popular athletes has seen his profile raised in a way that could soon reduce his power as a marketing force — or have little impact at all. Marketing experts were divided over whether Woods’ image has been sullied by his refusal to speak with police after the golf great’s single-car accident early Friday morning outside his mansion in Orlando, Fla., and rumors of discord with his wife, Elin Nordegren, and alleged affairs. For now, one of Woods’ most visible sponsors, Nike Golf, is standing by him. His roster of sponsors also includes LVMH watch and jewelry brand Tag Heuer, Titelist, AT&T, Accenture, Electronic Arts Sports (“Tiger Woods PGA Tour Golf”), Gatorade Tiger and NetJets.

“The tall tall girl with long long hair and mini mini skirt,” was how WWD described Françoise Hardy upon meeting the French folk-pop chanteuse in October 1966. Then 22 years old, Hardy had already sold 13 million records since bursting onto the scene at age 18, but seemed — in appearance and in conversation — very much a little girl, and very disenchanted with the biz. Having established herself as a singer of yé-yé music, a style that emerged in early-Sixties Europe, she was on the cusp of becoming a big-screen sensation — “Grand Prix,” the classic John Frankenheimer film (starring Yves Montand and James Garner), in which Hardy had a featured role, was about to premiere in the U.S. Aptly, WWD was trailing Hardy on a shopping trip, including to the house of Saint Laurent, to select some looks for upcoming promotional appearances, and for her impending Stateside blitz. Click here to see 15 vintage images of Hardy.
Newsletters