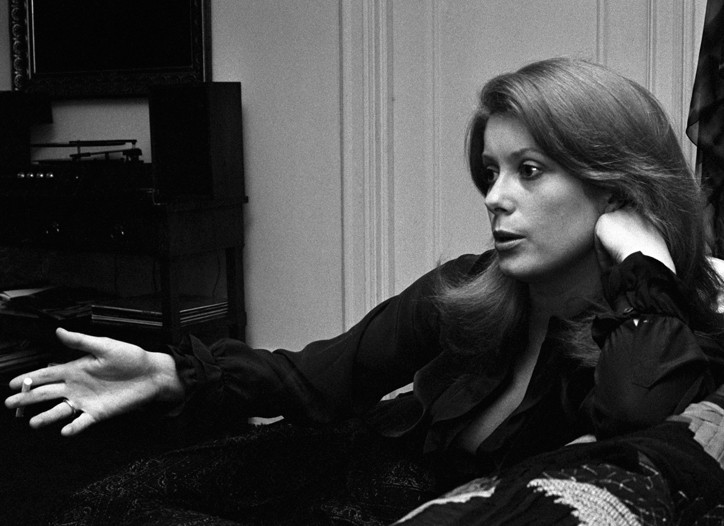 Of all the celebrity interviews WWD has come across, the 1971 story on French actress Catherine Deneuve is one of the most quotable. (See: “Love is life.”) Sitting in a hotel room in Chicago, a 27-year-old Deneuve opened up to WWD on a variety of topics, including marriage, women’s rights and fashion, mais oui.

“I demand the same thing from a man as from a woman. To be open, but mysterious…open to things, to life,” she said as she chain smoked Kent cigarettes.

“I’m not for marriage,” continued Deneuve, whose marriage to British photographer David Bailey lasted less than a decade, “but I’m not against it, either. I feel fine at the moment. I’m single. I’m glad I was married. I was happy then.”

A fierce pro-choice advocate and precursor to the celebrity-turned-political activist, Deneuve had recently come out in a French magazine as a supporter of legalized abortion (as a co-signer of the Manifesto of the 343, Deneuve admitted to having received an illegal abortion). “I know some people will say the ad is a reaction of movie people,” she said. “But if the ad hadn’t been signed by people like us, nobody would have noticed. This is the right scandal, for once.

“There are people in France who feel abortion is killing. The government is not fair about it. They haven’t done that much to keep you from needing an abortion. If abortion is not legal, at least give people the choice not to have children.

“People should be educated and told how to have relations without getting pregnant. There is no reason to create mystery for the young, no reason to feel guilty for the rest of your life. It’s too much to ask, too much.”

“I’m very much for women at home, having children devoted to a man,” she said. “In France, it’s not fair. Women should have a place to put children when they work.” Yet, Deneuve added, “the movement has gone too far. Liberation and freedom of women is not exactly the right combination. “Women are more fragile than men and can’t deal with life like men. Women have proven they can do things men can’t do. There are a lot of things women can’t do in positions and jobs. Women are not superior to men; they are different.

“You really are what you are worth. You have to be either famous or rich.”

On the topic of fashion, the YSL muse said: “It’s not going anywhere. It’s not a thing in itself. It’s in pop music and Pop Art, in paintings, everything.

“St. Laurent is very close to Pop Art. You might not like it, but it’s a shock.” Deneuve added, “I feel old fashioned. I don’t like HotPants.”

And fashion photography? “A still picture is a very beautiful distortion of life. But it is a distortion.”