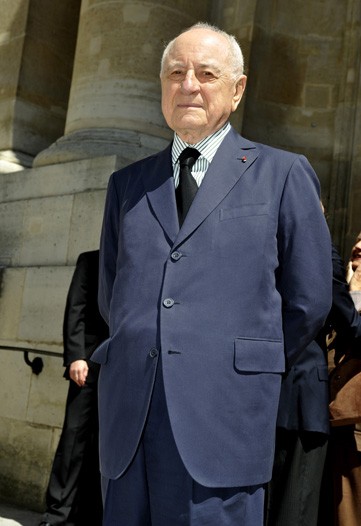 PARIS — Couturier Yves Saint Laurent was remembered Tuesday at a mass to mark the first anniversary of his death.

Unlike last year’s funeral, which was restricted to a number of selected guests from fashion, politics and show business, the memorial service at the Eglise Saint-Roch here was open to the public. But it nevertheless attracted many longtime associates, employees, customers, former models and fellow designers, who joined Pierre Bergé, the late couturier’s companion and business partner of 50 years, to remember Saint Laurent.

Designers in attendance included Hubert de Givenchy, who arrived on crutches; Agnès Trouble of agnès b., and Giambattista Valli. Former French culture minister Jack Lang and Ségolène Royal, the former presidential candidate, were the only representatives of the political world to attend.

Just like at the funeral service a year ago, Bergé paid a moving tribute to Saint Laurent, recounting his influence on fashion. “He changed the life of women,” Bergé noted, alluding to the designer’s innovations, such as the trouser suit.

He also talked about the “unique relationship” he had with Saint Laurent, who died of brain cancer June 1, 2008, at the age of 71.

In a touching and intensely personal remembrance, Bergé recalled how he met Saint Laurent, then only 21, half a century ago at the time he showed his first collection for Dior, and how the two men combined their destinies into what would become one of fashion’s most historic partnerships.

The memorial mass, at the same church near the Louvre Museum where the funeral was celebrated a year ago, was punctuated by live renditions of Mozart’s “Missa Solemnis” and “Missa Grande,” played by the L’Ensemble Parisien orchestra.

The decision to open the memorial service to the public was taken to allow ordinary people who couldn’t attend the funeral mass last year to remember the acclaimed designer, according to a spokesman for the Pierre Bergé-Yves Saint Laurent Foundation.