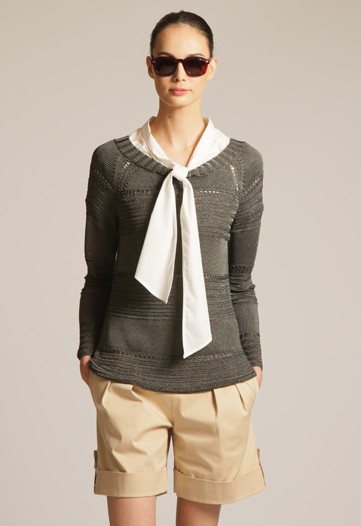 It’s Monday morning and Zac Posen is zipping around his TriBeCa studio, laid with a circular piece of Pepto-pink carpet (re-appropriated from his spring 2009 runway show), which exactly matches a color group from his latest collection, complete and neatly hung on four color-coded racks. No, it’s not pre-fall — that’s still on the drawing board in the back — but an entirely new endeavor: Z Spoke, a new lower-priced line launching exclusively at Saks Fifth Avenue for spring.

“We did these white shirts, and that’s our bootleg pant,” says Posen, holding up a navy T-shirt. “Opening price point is what, $88?”

Actually, $78. And anyone familiar with Posen’s collection, defined largely by over-the-top eveningwear, might swear he was speaking in tongues. Then again, Z Spoke is a new vocabulary for Posen, and the keyword is sportswear. “I think it’s going to surprise people,” says Posen, who describes the 60-piece range, which is strong on separates such as knits, cotton shirting, blazers and pleated khaki shorts, as “minimalist and utilitarian.” Such adjectives don’t conjure his signature collection, built around red-carpet moments, which he launched at age 21 in 2001.

But Posen insists the lack of everyday clothes on his runways hasn’t been for lack of interest on his part or his retailers. “We’ve had so much pressure from press and retailers to build out our collection into this more American sportswear look in our top line,” he says. “To me, it’s more appropriate to build a whole brand and collection around this price point. Chic sportswear should be at this price point. Designer dresses and cocktail pieces should be at a more expensive price point.”

To that end, Z Spoke, much of which is produced in Asia, retails from $78 for a cotton T-shirt to $675 for a knit dress, while the Zac Posen collection ranges from $900 to $12,000, with custom pieces fetching upwards of $20,000. Z Spoke will launch in 17 Saks doors as well as saks.com and is scheduled for six deliveries per year.

While Posen says a rollout to other retailers is in the long-term plan, for the meantime, it’s all about Saks, which has carried his signature collection since 2004. “Zac has always wanted to do a line that would be Zac Posen but maybe talk to a different girl,” says Ron Frasch, Saks Inc.’s president and chief merchandising officer. “Over the course of the past year, we got together with Zac and Susan [Posen, company chairman and Zac’s mother] and began having conversations around how the world has changed and what some of the needs are that we had as a retailer. The moment was opportune.” Though Frasch declines to release sales projections, he says the forecast is “Significant. We’re looking at this as a significant launch, a significant business relationship and something we believe has significant long-term legs.”

Z Spoke comes at a time when the market has shifted and many of Posen’s fellow young designers — Doo-Ri Chung, Thakoon Panichgul and Richard Chai among them — have recently launched lower-priced collections. Whereas Chung and Chai positioned their secondary lines in the contemporary market, Posen’s new line will sit on Saks’ fourth floor, the former bridge department now rebranded as Wear, alongside Tory Burch, Elie Tahari, M Missoni and Ralph Lauren Blue Label. “It’s also about seeing where the opportunity in the market is and seeing where we can grow and build,” says Posen of the collection’s in-store location.

As for the overall aesthetic of Z Spoke, “It’s not Zac-for-less, it’s not the little sister collection at all,” says Posen. “The dresses — that’s something I can do with my eyes closed. This is about a new identity.” His inspiration board is full of downtown imagery such as beaten-up Nike Dunks and a shot of Robert De Niro as Travis Bickle. A palette of neutrals with ample pops of kelly green, pink and red gives the clothes a retro vibe, or an “urban hipster quality” as Posen puts it, adding he could see these styles on a Lower East Side girl.

To wit, while Hollywood has driven much of his designer business, Posen stresses that Z Spoke is not a celebrity brand, but one more attuned to the street. That said, he’s not looking to add to the glut of tough T-shirts and distressed jeans. “There’s a lot of that on the market,” says Posen. “I treat a T-shirt as a T-shirt should be treated. With a lot of love.”