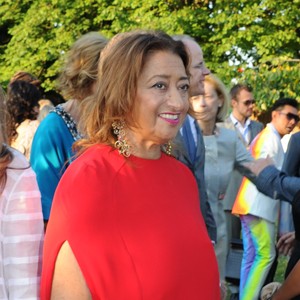 LONDON — Zaha Hadid, the architect famous for her curving, sculptural designs and dramatic creations, has died at age 65, according to her company.

She had contracted bronchitis earlier in the week and died of a heart attack while being treated in a hospital in Miami.

The Iraqi-British Hadid was a fashion industry fixture, collaborating with brands including Fendi, De Beers, Swarovski and Georg Jensen, for which she recently designed a line of jewelry.

Earlier this month she created an installation for Jensen’s space at Baselworld. In January, Hadid and Anya Hindmarch were named ambassadors for the Creative Entrepreneurs initiative, based in the U.K.

Hadid was commissioned to design buildings around the world, and some of her most famous creations included The Riverside Museum in Glasgow, Scotland; the Vitra Fire Station in Germany; Guangzhou Opera House in China, and MAXXI National Museum of the 21st-century arts in Rome.