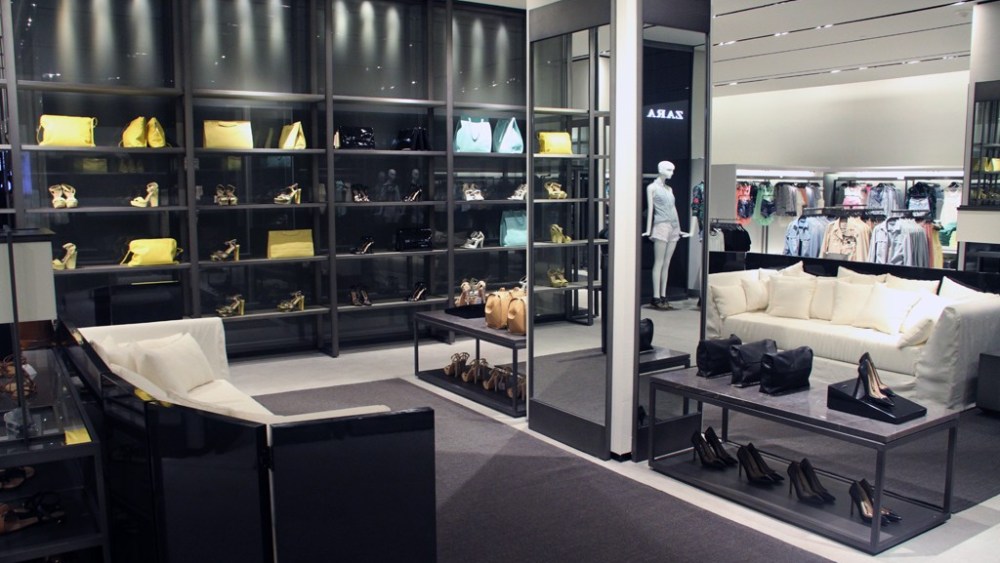 NEW YORK — Zara describes the address of its new 32,000-square-foot flagship at 666 Fifth Avenue as “a couldn’t-be-better location.” And at a price of $324 million, it better be.

Inditex, the Spanish retailer’s parent, paid that amount last March for the retail condo space at 666 Fifth Avenue and 52nd Street in what was at the time the city’s biggest retail condominium deal. On Thursday, Inditex will reveal what it is doing with the expensive real estate when it unveils the latest iteration of its global flagship prototype.

Formerly the NBA Store, Zara’s flagship is part of a 90,000-square-foot retail condo that includes Hollister and Uniqlo flagships. Uniqlo in 2010 signed a 15-year lease for $300 million, setting a record as the priciest store lease. Zara’s transaction valued the space at $8,300 a square foot. The deal was in keeping with Inditex’s real estate acquisition strategy of growing stores on a leasehold basis.

Zara has long had an affinity for New York. The retailer opened its first overseas store in Manhattan in 1989. The chain was young at the time with barely a dozen Zara units in Spain and Portugal.

With a black-and-white theme, the flagship is Zara’s largest unit in the U.S. and one of the biggest in the world. Its three levels offer several sub-brands of women’s wear, men’s wear and children’s wear.

The flagship, representing Zara’s new brand image, was designed for a city that’s “mad about fashion,” the company said.

Elsa Urquijo Architects, a firm from La Coruña, Spain, where Zara is based, gave the store “more architectural character.” Long aisles on either side of open staircases and escalators leading to the lower level are called “virtual catwalks.” The thin lanes lead from the front to the back of the store with a series of rooms or alcoves just off the aisles.

The rooms highlight different aspects of the collection; for example, there’s a pastel story on display in one and black items in another, such as a flapper dress with bone and black sequins retailing for $159, and a sleeveless leather fringe top for $129. A third room contains white garments made of lace or tweed or covered with sequins.

For a retailer that produces 20,000 to 30,000 designs each year, the challenge is to avoid overwhelming customers with the breadth and depth of its offerings. “We define them as small boutiques with individual collections,” said Jackie Lee, director of stores.

Zara’s fan letter to New York includes a film on its Web site, “Dear New York.” Directed by Luis Urculo, it uses found objects to illustrate the city, such as boxes configured to look like skyscrapers, rulers laid out like the city’s grid of streets, open books with the type designed to mimic buildings and a tattoo of the East River on a burly arm.

Pieces from Zara Studio, which feature sophisticated styles in better fabrics and with a slightly higher price point, are mixed in with the looks in the alcoves. A blush pink tuxedo jacket is $159, and a yellow three-quarter-length buttonless coat is $159.

On the lower level, Zara Basic and Zara TRF for younger shoppers can be found, including pastel lace tops and tie-dyed maxidresses. “The trends are more radical,” Lee said.

“There’s thousands of ideas,” Lee said, referring to new categories Zara might try. “We’re open to everything. We talk to our managers and get their feedback. We’re expanding accessories and testing jewelry.”

Eco-friendly is important to Zara, which set sustainability goals for the flagship of 50 percent water savings and 30 percent annual power savings, as well as using biodegradable plastic bags. Escalators will run very slowly when not in use and a double door entrance with an air curtain will prevent energy loss.

Zara, with worldwide sales of 8 billion euros, or $10.4 billion at current exchange, is aggressively pushing its way into many parts of the world. A third Zara store in Australia will bow in November at Adelaide’s Burnside Village Shopping Centre, modeled after the design of the Fifth Avenue flagship. The retailer this month is slated to open its second South African store at the Gateway Theatre of Shopping outside Durban.

Zara operates 47 stores in the U.S. According to reports, Zara’s first store in San Diego, a 21,000-square-foot two-level unit at the Fashion Valley Mall, will bow in the fall. The company, which reports earnings next week, declined to comment due to the mandatory quiet period.

Manhattan has six Zara stores. An existing unit at 689 Fifth Avenue, two blocks north of the flagship, will become the first Massimo Dutti store in the U.S. in the fall. Massimo Dutti is described as classic and sophisticated with slightly higher price points and a more affluent customer. The brand is less developed than Zara, with about 500 stores worldwide, compared with Zara’s 1,800 units.

Trends at Zara come in quick succession, overlapping with one another and ultimately fading away. Its 300 designers in Spain rely on store managers around the world to make daily reports itemizing what’s working and what isn’t. “We have a very flexible logistics platform,” Lee said. “We send new deliveries to every store twice a week. The stores are changing every two weeks. If yellow is strong, we’ll push it and make black a smaller part of the mix.”