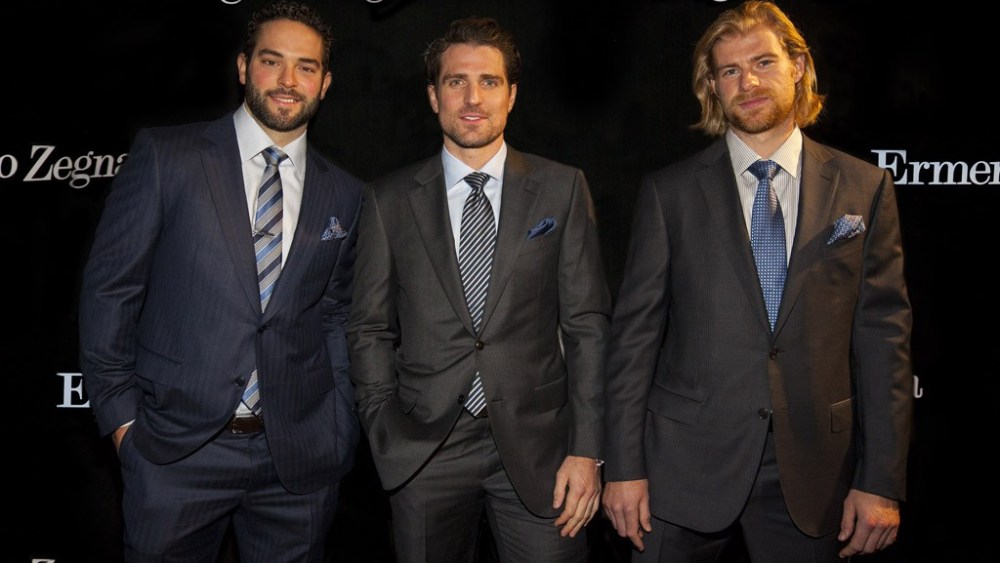 CHICAGO — Blues-rockers ZZ Top once sang: “Every girl’s crazy about a sharp-dressed man.” Patrick Sharp, forward for the Stanley Cup champion Chicago Blackhawks, is married and a second-time father as of Sunday, so making every girl crazy isn’t exactly top of mind.

But Sharp still strives to look sharp for team road trips and off-ice events, and he’s stayed pretty brand-loyal to the Ermenegildo Zegna store on Chicago’s Michigan Avenue, where he was on hand Wednesday evening to host the grand reopening of the redesigned store with its newly added second story.

“I’ve been wearing their suits for a long time,” Sharp said. He particularly appreciates the store’s custom fits, which work well for hockey players. “Our body types aren’t exactly made for off-the-rack,” he said, with “thicker legs and bigger butts” than the average man.

In addition to Zegna’s formalwear, Sharp said he’s been starting to try out the Italian clothier’s casualwear and accessories like travel bags and wallets. He sees his own style as “very casual” — the Canadian prefers an “all-American,” blue-jeans-clad look.

But Sharp doesn’t see himself as a clotheshorse and appreciates the suggestions from Zegna staff and others, like his wife, Abby. “I still need help in that department,” he said self-effacingly. “I always like to dress up and look nice, but I don’t have a great sense of style.”

On hand with Sharp for the store reopening were teammates Brandon Bollig and Michael Kostka as well as other local luminaries including Spiaggia chef Tony Mantuano, “Check Please!” host Catherine De Orio, and restaurateur Bill Kim. They heard first the sounds of DJ Michaelangelo L’Acqua and then two-piece combo Hey Champ.

The redesigned store, at 645 North Michigan, now covers 4,300 square feet of space. The entrance has a laminated glass facade and a video display of seasonal Milan runway collections, and the interior blends rosewood, mahogany and gunmetal and bronze metal.

The new second story is built around a stone fireplace and has a room dedicated exclusively to the Couture collection from head of design Stefano Pilati, which is new to the Chicago store, according to a company spokeswoman. Available is an array of suits, shirts, jeans, belts and shoes.

Also new to Chicago is the Personalization Project, which provides made-to-order clothing and accessories, and which will only be available in two other U.S. stores: New York and Beverly Hills. It goes beyond the store’s still-available Made to Measure service, in that it enables the customer to select a pattern and color of fabric, as well as to have his name woven into the selvedge of the fabric.