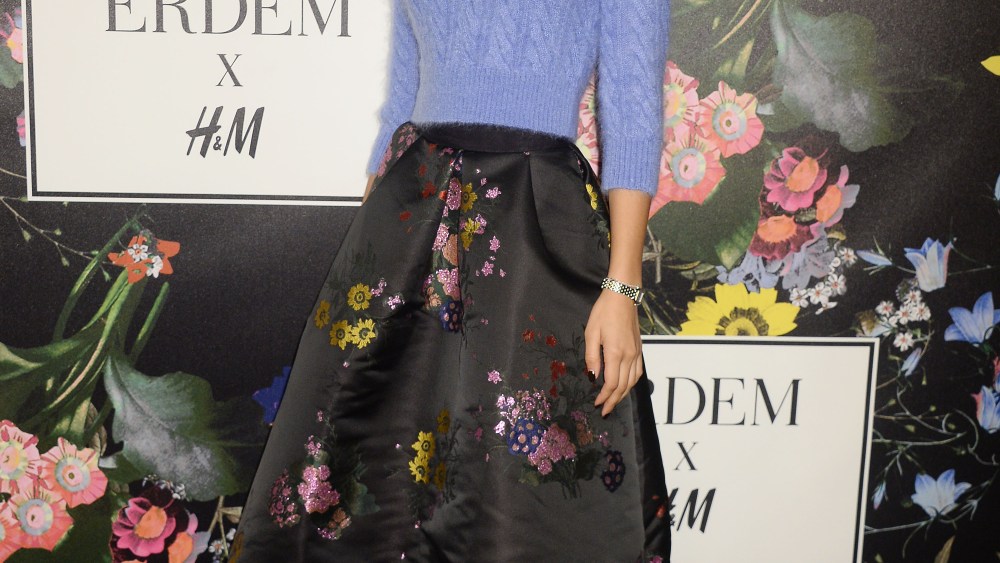 “It was gorgeous. I was blown away,” said Kate Bosworth of the collection Erdem Moralioglu designed for H&M. Although the collection won’t make its debut in stores until Nov. 2 with the official party in the designer’s hometown of London, Los Angeles got a preview — and the first crack at a pop-up shop — on Wednesday night.

A lavish runway show at the Wilshire Ebell Theater drew not only Bosworth but Zendaya, Kirsten Dunst, Selma Blair, Rashida Jones, Jaime King, Alexa Chung, Ahna O’Reilly and more. Situated inside and outside in the courtyard garden, the show took models on a winding path, first down four flights of outdoor stairs, then through the various atriums and pathways.

“Erdem in the master of dark, floral romance so this is the perfect setting. It’s so atmospheric,” noted Bosworth. “Maybe if all runway shows were like this I’d go out more, and not be so boring,” she laughed.

Said Moralioglu, “We thought maybe we should show somewhere outside or some place we’ve never done something before. So, Baz, sun, film…we thought, ‘Yes, L.A.’” He was referring to director Baz Luhrmann, who directed a dramatic movie trailer to tease the collection.

For those who hadn’t yet seen it on the Internet, the director was on hand after the show to introduce the film’s projection onto the theater’s massive limestone wall.

Several of the models made cameos, including the men who wore the designer’s first men’s wear pieces. Moralioglu said the men’s collection influenced the women’s line and vice versa. “It was very personal. So much of it had to do with having a twin sister, the way she would dress in high school, the shape of my mom’s handbags, the suits my dad wore in the Sixties with that kind of jauntiness and Englishness,” he said.

“I was interested in creating a collection that wasn’t in any way disposable. It was about pieces you’d create and keep forever, things that have a permanence to it. And it was important it felt like a new body of work and not a less expensive version of something I’d done previously,” the designer added.

In fact, Luhrmann said the clothes were the script for the movie trailer, which also drew much of its influence from films such as “Brideshead Revisited.”

“I got really into it, but it’s only a trailer. If there are any financiers in the crowd, let’s meet afterward in the pop-up shop,” Luhrmann said.

After the screening, he directed the crowd: “Now, Champagne and shopping. I believe that’s the order of the day.”