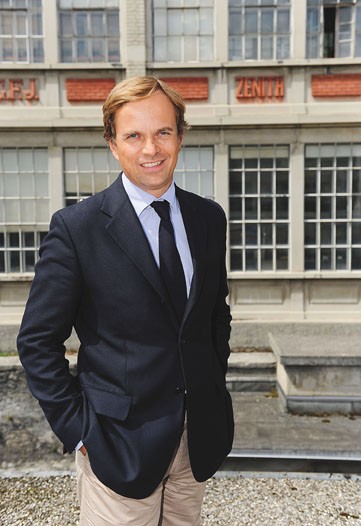 PARIS — When Jean-Frédéric Dufour took over as president and chief executive officer of Zenith SA in June 2009, purists breathed a sigh of relief.

An industry veteran, Dufour was charged with bringing the Swiss watch brand back to a more classical positioning after his flamboyant predecessor Thierry Nataf’s fashion-oriented approach fizzled out with the onset of the sector’s worst crisis in three decades.

Fast-forward 18 months, and Dufour has been named “Man of the Year 2011” by a jury of journalists specialized in the watch industry.

As he heads into Baselworld, the executive can pride himself on having turned around Zenith with a radical approach that involved cutting the number of styles to 120 from 850, and putting the focus back on the heritage of the house, including its legendary Elite and El Primero movements.

“We have returned to products that are more in line with the DNA of Zenith,” Dufour told WWD. “When you have a heritage that rich, and archives that complete, you have to take advantage of them, and that is what makes the difference in the end.”

Getting there was not easy. The first thing Dufour did was to lay off a third of staff, though he has since rehired half that number.

“I arrived at the worst moment of the crisis,” he said. “It’s like arriving in a forest after a hurricane and finding all the trees on the ground. In a way, though, when all the trees are down, it gives you the opportunity to plant a stronger species or reorganize the land. It gave me the opportunity to completely turn around the brand and I took a 180-degree turn.”

From cost control to inventory management to the supply chain, Dufour set about reorganizing Zenith, set up in 1865 in Le Locle by Georges Favre-Jacot, a 22-year-old who created the concept of manufacturing by bringing together all the artisan watchmakers, who had previously worked independently, under one roof.

“I did it with a lot of pleasure, passion, explaining, communicating, exchanging, persuading, because when you operate a 180-degree turn, you need all hands on deck,” he said.” That’s probably what took the most energy at the start: Convincing everyone that the direction we were heading in was the right one. That was the challenge.”

Dufour is not short on energy. His conversation is peppered with maxims that appear to have been lifted straight from “The 7 Habits of Highly Effective People.” As he sipped a diet juice on the courtyard terrace of the Park Hyatt Vendôme hotel in Paris, the executive spelled out his philosophy in no uncertain terms.

“There’s no point even thinking about what annoys you in life, it’s a waste of energy,” he said. “It’s better to concentrate on creativity, on tomorrow, on what you can offer that is different from what everyone else is offering.”

A graduate in commercial and industrial sciences from the University of Geneva, Dufour cut his teeth at Chopard, Ulysse Nardin and Swatch Group. Before joining Zenith, part of luxury conglomerate LVMH Moët Hennessy Louis Vuitton, he had served as head of product development for Chopard Watches and Jewelry since 2001.

Though LVMH does not disclose numbers for its individual watch brands, Dufour said Zenith registered double-digit growth in 2010. Philippe Pascal, president of LVMH’s watches and jewelry division, added that the brand was profitable last year.

“The hard work done in 2009 produced some very encouraging results in 2010, so I think we’re on the right track,” Pascal said. “The brand has rebounded stronger from the crisis with a positioning which I think is very attractive.”

Though Zenith has a handful of stand-alone stores and will open a flagship in Hong Kong’s Times Square later this year, it is distributed mainly through multibrand retailers. Dufour said the total number of points of sale remained stable in 2010, as the brand closed some underperforming doors and opened others.

“It’s quite funny because we are seeing something that the Zenith sales team hadn’t experienced for a long time: Retailers are ringing us to ask if they can take on the brand,” said Dufour.

Among those who started carrying Zenith after visiting the brand at Baselworld last year was Laurent Picciotto, owner of Paris-based fine watch retailer Chronopassion. Picciotto said he was conquered by the “formidable job” accomplished by Dufour, though he added that the message is still filtering down to the end customer.

“Customers today have still not realized the important transformation that has taken place between the Nataf exploits of the past and what Jean-Frédéric is doing today,” he said. “We are pretty confident, but we are still some way from our target.”

Not that this kind of feedback is likely to dent Dufour’s confidence. His latest endeavor harks back to the spirit of Zenith’s early days, when Favre-Jacot broke new ground by creating the most precise and reliable watches of his era.

Among the documents Dufour found in the archives was a testimonial letter written by French aviator Louis Blériot, who used a Zenith wristwatch and altimeter for his landmark Channel crossing in 1909. The brand’s long-standing link with the world of aviation has inspired one of Zenith’s Basel launches this year, the El Primero Stratos Flyback Striking 10th.

Zenith will also produce a Stratos Pole2Pole chronograph in a limited edition of 500, one of which will be worn by Swedish explorer Johan Ernst Nilson as he embarks on a one-year trek from the North Pole to the South Pole starting March 30.

And last month the brand unveiled its partnership with Alain Thébault’s Hydroptère project, a high-tech sailing craft that broke Blériot’s flight record for the Channel crossing by four minutes.

“What is very funny is that there is a link between our history and the present, and if you had told Blériot when he set his record 100 years ago that it would be beaten by a sailing boat, he would have called you nuts,” Dufour said.

The flying trimaran will feature in a new Zenith advertising campaign. As official timekeeper, the watch brand wants to accompany the Hydroptère team in eventually setting new speed records for crossing the Atlantic and sailing around the world.