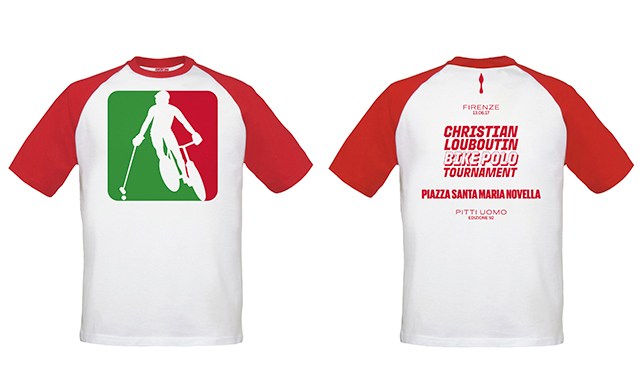 Partial to quirkier sports, Christian Louboutin is organizing a bike polo tournament at the Pitti Uomo fair in Florence.

Scheduled for June 13, the event is to feature eight, three-member teams from Europe, Asia and the U.S. — with all of the players shod in customized sneakers from Louboutin’s fall collection. His spring 2018 collection is to be unveiled separately at a showroom presentation.

Invitations to the tournament, to be dispatched starting today, include a T-shirt with an NBA-esque logo.

Born in Seattle in 1999 and exported to Europe around 2006, bike polo is played on a hockey-rink sized pitch, and feet must never touch the ground. Louboutin’s tournament will culminate with an awards ceremony.

“It’s part of the urban fabric,” according to Louboutin, who dressed athletes for Cuba’s Olympic delegation last year, and has referenced such sports as boxing, hiking and basketball in his collections.

The designer said he plans to cheer for the two French teams: Raclette Party and Call Me Daddy, the latter the current world champion.

Participants in the sport tend to shun activewear, preferring modern streetwear or natty, retro styles reminiscent of the Twenties and Thirties.

Louboutin, Federico Curradi and Alanui are among guests at the upcoming edition of Pitti Uomo, which runs through June 19 and also features runway shows by J.W. Anderson and Off-White.