Montblanc is courting streetwear aficionados with a new collaboration collection with A Bathing Ape, launching soon at select Montblanc and Bape stores and their respective web sites.

“We were looking for a collaborative partner to apply their DNA onto ours,” explained Montblanc creative director Zaim Kamal. “We reached out to Bape and they were happy about this collaboration. We can speak of Bape as a maison, because they have the same idea of detailing and excellence.”

Kamal had been a longtime fan and supporter of Bape and was introduced to the brand years ago when he was living in London. As a “child of the Eighties and Nineties” and “admirer of the Harajuku style,” he was drawn to the brand’s “new expression of streetwear” with “an otaku spin.” After connecting in Tokyo, the two brands set the project in motion.

“The Japan Montblanc team reached out to us. It was our great pleasure and the entire team was thrilled,” said Go Miyazaki, Bape’s GM of marketing. “We have successfully partnered up with many brands and companies over the years. It goes without saying that Montblanc is one of the many astounding partners we have worked with.”

The two brands decided to focus on New York City and California to launch the collaboration for their respective, yet intertwined, streetwear histories. Montblanc x Bape will be sold at Montblanc stores on Madison Avenue, on Grant Avenue in San Francisco and South Coast Plaza, and at Bape stores in SoHo and Melrose. 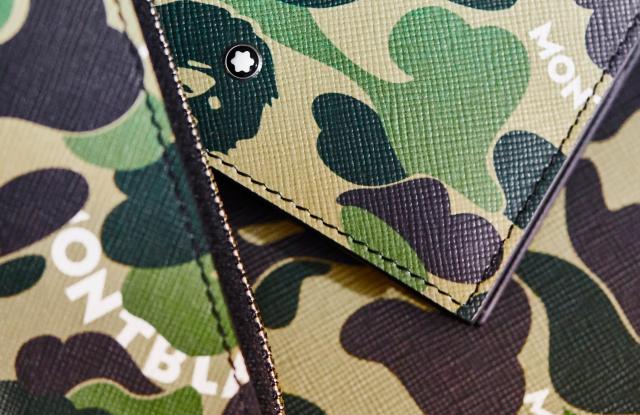 Kamal hopes the collaboration will entice a younger clientele and give the business professional the opportunity to merge streetwear into their daily lives.

“The age lines have blurred a lot,” he explained. “It’s not which age bracket you belong to, but what tribe and references. The expression of business today is not what it was, separated by on-duty and off-duty. We’re merging the two, presenting the new way of doing business, becoming part of the fiber of your day-to-day.”

Miyazaki added, “It was Bape’s first time creating items for the business scene. Montblanc paved the way for us to enter the world of refinement and formality from streetwear.”

The 100-plus-year-old German company in June launched its StarWalker collection to honor the 50th anniversary of NASA’s moon landing and released its Explorer fragrance made in collaboration with Givaudan’s Jordi Fernandez, Antoine Maisondieu and Olivier Pescheux. In September, it partnered with (RED) and designer Marc Newson on a writing instrument.

Bape has collaborated with a lot of brands over the years, including in the last year Swatch, Adidas, Ghostbusters, in honor of the film’s 35th anniversary, Marvel around “Avengers: Endgame,” and rapper Lil Yachty.

Kamal said “it’s too early to tell” if there will be another Montblanc x Bape collaboration. “We want to see how it works,” he said. “We’ve created this bond together and we’ll see how that comes out. We’re very happy with the way it progressed and how it went.”

Montblanc is also in talks with a few other brands for collaborations, but Kamal declined to provide any names, saying only that the Bape project will allow for more “work in different avenues.”