Djokovic and Montblanc also spoke about the importance of early childhood education at an intimate event in New York City.

NEW YORK — Novak Djokovic is a huge advocate for sports and education, but the latter is why he partnered with Montblanc through his Novak Djokovic Foundation to create a limited-edition StarWalker writing instrument.

Djokovic, who is the number-one ranked tennis player in the world and is defending his U.S. Open championship this month, had an intimate conversation with Hypebeast’s Courtney Kenefick at Soho House in the Meatpacking District to talk about his collaboration with Montblanc, his foundation, the importance of education and his experience in education and writing.

“I’ve grown up in a household where education was essential. It took more than just tennis skills to get where I am today,” Djokovic said.

Djokovic spoke at length about education in Serbia, his home country, and how it can improve early childhood education programs. “Our education is quite good [for ages] seven and older, but there’s lack of awareness of what preschool really means,” he explained. He said culture and finances are reasons for the lack of programs and awareness, and added, “As a father of two wonderful children, now I’m understanding more.”

Djokovic started the Novak Djokovic Foundation in 2007 to invest in preschool education in Serbia at a time when 55 percent of children under the age of 7 were not participating in preschool programs. Today, through the foundation and partnerships with Unicef and the World Bank, he reconstructed and built 43 kindergartens and helped more than 22,000 children.

“As a parent, a lot in your day is the intellectual abilities and development of your child,” he said. “So, I think it’s a combination of both, [and it] works differently in different parts of the world.”

Djokovic also mentioned his “biggest influence on his tennis career” — Jelena Gencic, the late Serbian tennis and handball coach, who taught him the fundamentals of tennis and journaling. He explained that he retains information easier by writing things down as opposed to typing, and was inspired to write more when he met his then-girlfriend and now-wife, Jelena. He said she would write to him as a way to “share her emotions.

“She’s very inspired, very motivated to write and always share. You know with a piece of paper, through a writing instrument, her emotions, what she feels, when she’s feeling good or bad or something is bothering her in the relationship,” he said. Her writing inspired him to also “write to keep track of how I feel” and also document his travels for UNICEF and his progress on the tennis court.

The couple is also a fan of Montblanc — “I love the roller. That’s my favorite” — and has an extensive collection of writing instruments from the German company. Djokovic and Montblanc chief executive officer Nicolas Baretzki met at the Laureus World Sports Awards in 2019 and were excited to discover their shared passion for writing and global education programs. Baretzki said the company was “delighted” to learn that Djokovic keeps a daily journal and the tennis star was “very happy” that the company recognized the mission and a vision of our foundation and what we have achieved so far in the last 10 years.

“Our ultimate goal that we are convinced we can achieve one day in our country is to have every child attend and have an opportunity or have access to a to kindergarten or any pre-school program. That is our big goal for our country,” Djokovic said. 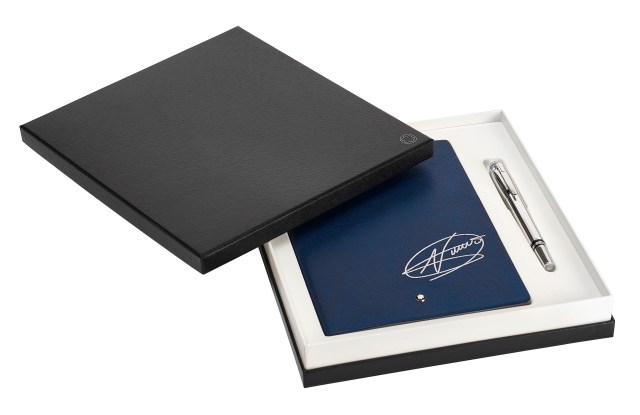 The StarWalker special-edition Fineliner retails for $740, comes with a matching notebook emblazoned with Djokovic’s signature, and is limited to only 300 pieces available exclusively at Montblanc stores in New York City, London and Paris and online in the U.S., U.K. and France.