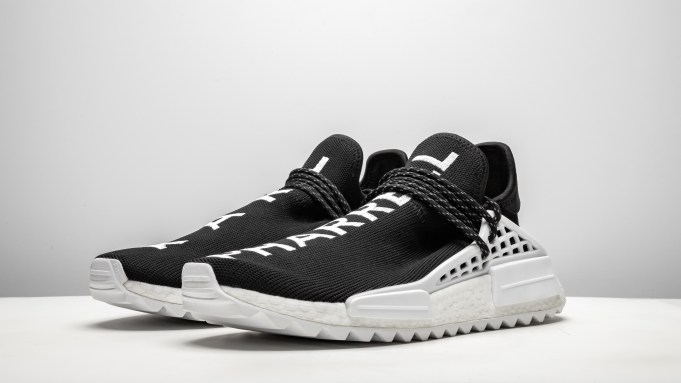 Sotheby’s and Stadium Goods are partnering on a global online-only auction of 100 rare and limited-edition sneakers that opens today and runs through July 23. The auction includes a public exhibition at Sotheby’s New York Gallery at 1334 York Avenue.

The sneakers, which have been provided by Stadium Goods’ Trophy Case, the company’s collection of the rarest items, span several years and date as far back as the early Seventies with the Nike “Moon Shoe” made by Nike cofounder and Oregon University track coach Bill Bowerman for runners at the 1972 Olympic Trials. That shoe is estimated at $160,000 given its unworn condition.

Other models expected to draw interest include Virgil Abloh’s MCA Chicago Off-White x Nike Air Force 1 sneakers that were on display at the designer’s “Figures of Speech” exhibit at Chicago’s Museum of Contemporary Art.

“We spend a lot of time on our Trophy Case,” said Stadium Goods cofounder and co-chief executive officer John McPheters. “A good chunk of items we’ve already had. We’ve done a ton of work behind creating this list of shoes and it’s indicative of how this world has changed.”

Additional sneakers available for auction include the 2011 and 2016 versions of the Nike Mags from the film “Back to the Future” (the 2016 Nike Mags are estimated to sell for as high as $70,000); the Nike Air Force 1 x Off-White sneakers for MoMA; the “Wahlburgers” Air Jordan IVs made for the burger chain of the same name founded by actors Mark and Donnie Wahlberg and their brother Paul; Air Jordan XIs made to commemorate Derek Jeter’s retirement from the New York Yankees; Paris Nike SB Low Dunks featuring designs by French Expressionist painter Bernard Buffet, and a one-of-one pair of Chanel x Pharrell x Adidas NMD sneakers for Karl Lagerfeld’s personal collection. The sale is estimated to achieve over $670,000.

McPheters explained the decision to go with an online sale, saying, “Live and in person is a big part of what we do, but we’re really a digital brand.”

“The mantra I use for Sotheby’s is that collectors gather here. What it means to be a collector is evolving,” said Noah Wunsch, Sotheby’s global head of e-commerce. “Sneakers are a new type of category and it’s important that we start to represent them as well.”

Wunsch grew up in downtown Manhattan and experienced the early sneaker boom first hand. He likens sneakers to art and perceives the category as “luxury collectibles.” He compared a Picasso print to sneakers, saying that an art piece from the Spanish painter appreciates in value differently than a sneaker. “The price might increase but the rarity does not increase,” he explained, “whereas sneakers and skateboards, the rarity continues to increase,d which increases the value.”

He decided to partner with Stadium Goods due to its “focus on authenticity” and positioning as “the luxury sneaker marketplace,” pointing to the company’s investment from LVMH Luxury Ventures and its acquisition by Farfetch for $250 million in 2018.

“[The auction] fits with a lot of the undertaking in our history,” added McPheters. “With Sotheby’s, we found a great partner to bring that premium experience to our audience.”

Wunsch expects a “50/50 split of existing clients and new clients” for the sneaker auction and hopes that one person doesn’t buy the entire collection.

Sotheby’s in May held an online auction of 1,300 Supreme accessories and items from the private collection of Yukio Takahashi, one of which included a pinball machine that sold for just over $80,000, and in January auctioned collector Ryan Fuller’s 248 Supreme skate decks, which sold for $800,000. Wunsch noticed an overlap of interest from art and streetwear collectors, including Grammy Award-winning producer Swizz Beatz, who is an avid art collector — an 18-foot wooden Kaws sculpture stands tall in his New Jersey home — and curated a contemporary art sale for the auction house in 2018.

He said, “I think there’s absolutely overlap. An interesting thing about the Supreme buyer is he collects Picasso and Monet. One of the coolest things about the Supreme sale is we had collectors come with their kids, who would tell them about the Peter Saville board and how he had a huge impact on Raf [Simons] and Virgil and the dad would talk about Jeff Koons.”

McPheters added, “Popularity has grown around the world. People are looking at casual fashion as a way of life. It’s definitely created this huge outpouring of collector interest in these products. Releases that will stand the test of time.”