How Dress Shoes Are Meeting the Sneakerhead Halfway

Hybrid models that bring the comfort of sneakers into more traditional silhouettes are becoming all the rage with guys.

Is the reign of sneakers coming to an end? Well, not quite.

The still-hot sales of Nike and Jordan collaborations with Travis Scott and J Balvin, Yeezy’s continued dominance for Adidas, and Reebok and New Balance becoming formidable players in the sneaker fray is evidence that sneakers remain popular. But that doesn’t mean loafers, brogues and Chelsea boots are far behind.

As sneakers established their dominance in the footwear market, other models of shoes have taken notice and implemented sneaker technology in traditional silhouettes to present a more modern option for the sophisticated 21st–century man.

Jean-Luc Diard, the global vice president of innovation for Deckers Brand and head of the Deckers x Lab innovation arm, said sneakers are the most comfortable footwear on the market, and there is an opportunity to push “high-performance elements” into everyday shoes. He cited Lululemon’s success at pushing performance into daily lives as an example.

Diard said the Deckers x Lab program began in early fall 2020 to push new innovation and developments and to serve as an incubator. Sneakers comprise 55 percent of footwear sold to men, and 35 percent of the women’s market, he said.

“Many shoes are definitively not as advanced as they could or should be today and on a multitude of levels,” he added. “When you develop a shoe, you start with the foot shape and just with this, feet have changed a lot. The biggest changes are possible with everything under the foot, everything that helps the rolling and cushioning. Solutions are already there, but so often they have not been implemented. Most of the companies have worked in one category and not the other categories.”

Cole Haan leads the way for shoes with sneaker soles, having first used former parent company Nike’s Lunar sole technology on its styles before creating its own, but players like Wolf & Shepherd and newly launched Amberjack are not far behind.

In addition, brands like Blackstock & Weber, Rowing Blazers and Aimé Leon Dore are redefining how shoes are presented, showcasing men in sweatsuits and bucket caps and trading fine wine for cervezas and classic cars to replace the typical heritage-heavy images portrayed by Old School shoe brands.

“Today, most people won’t need a dress shoe,” said Wolf & Shepherd cofounder Justin Schneider. “Maybe men will when they go back to work, but more than ever they will default to comfort.”

Launched in 2015, Wolf & Shepherd offers shoes built with comfort and performance at the forefront. Schneider previously worked for brands like Adidas, Reebok and New Balance before starting Wolf & Shepherd and the team has two designers from Nike. Though innovation is key for the brand, it also hired Italian developers that bring an air of tradition to the team.

The shoes have become favorites of athletes such as Brooklyn Nets head coach Steve Nash, who collaborated with the footwear brand on the launch of its Crossover Longwing shoe, and Toronto Raptors head coach Nick Nurse. NBA rookies Precious Achiuwa, Ashton Hagans, Devon Dotson, Devin Vassell, Tyrese Haliburton, Josh Green and Malachi Flynn all donned pairs, and Tampa Bay Buccaneers tight-end Rob Gronkowski is a brand ambassador. Runner Juris Silenieks actually set the half marathon world record in a pair of Wolf & Shepherd shoes at the Hotlanta half marathon in 2016.

“When we started making dress shoes, it was all built around the same process we’d use to make an athletic shoe,” Schneider said. Wolf & Shepherd shoes have attributes like modified toe springs typically found in track spikes, soft leather uppers altered by vegetable oil, and carbon frames in place of cork and resin. Schneider said they analyzed the dynamics of heel striking and took a problem-solving approach to the shoes’ designs to ensure comfort.

“We’re getting a wider audience,” Schneider said. “There’s your guy that wears a traditional suit but the prospects of these larger banks going more casual is influencing people to wear a button-down shirt, soft blazer, chinos and sneakers.”

Amberjack, founded by chief executive officer John Peters, launched in November offering “modern dress shoes designed for the future of work.” Similar to Wolf & Shepherd, Amberjack has a team comprised of alumni from Adidas, Cole Haan, Puma, Allen Edmonds, Coach and Rag & Bone. The shoes are also crafted with a softer leather upper and proprietary TPU sole made in Portugal and retail for $179.

“The category traditionally took pride in making products the same way for the last 200 years, but they kill your feet,” said Peters. “On the other hand, the comfort brands are typically very clunky and geared towards an older audience. So we asked, is there a combo here we can go after?

“What we’ve heard from our customers is on one hand there are people excited to dress up, but on the other hand guys are not excited to wear uncomfortable clothing and have adjusted to casual clothing,” he said. “You don’t see a lot of formal dress code attires. No one is going back to suit and ties anytime soon. The dress casual polo and slacks segment is the one we’re trying to play in. The branding and tone of voice of dress shoe brands hasn’t shifted to the younger consumer. I think you’ll see more of that in the industry.” 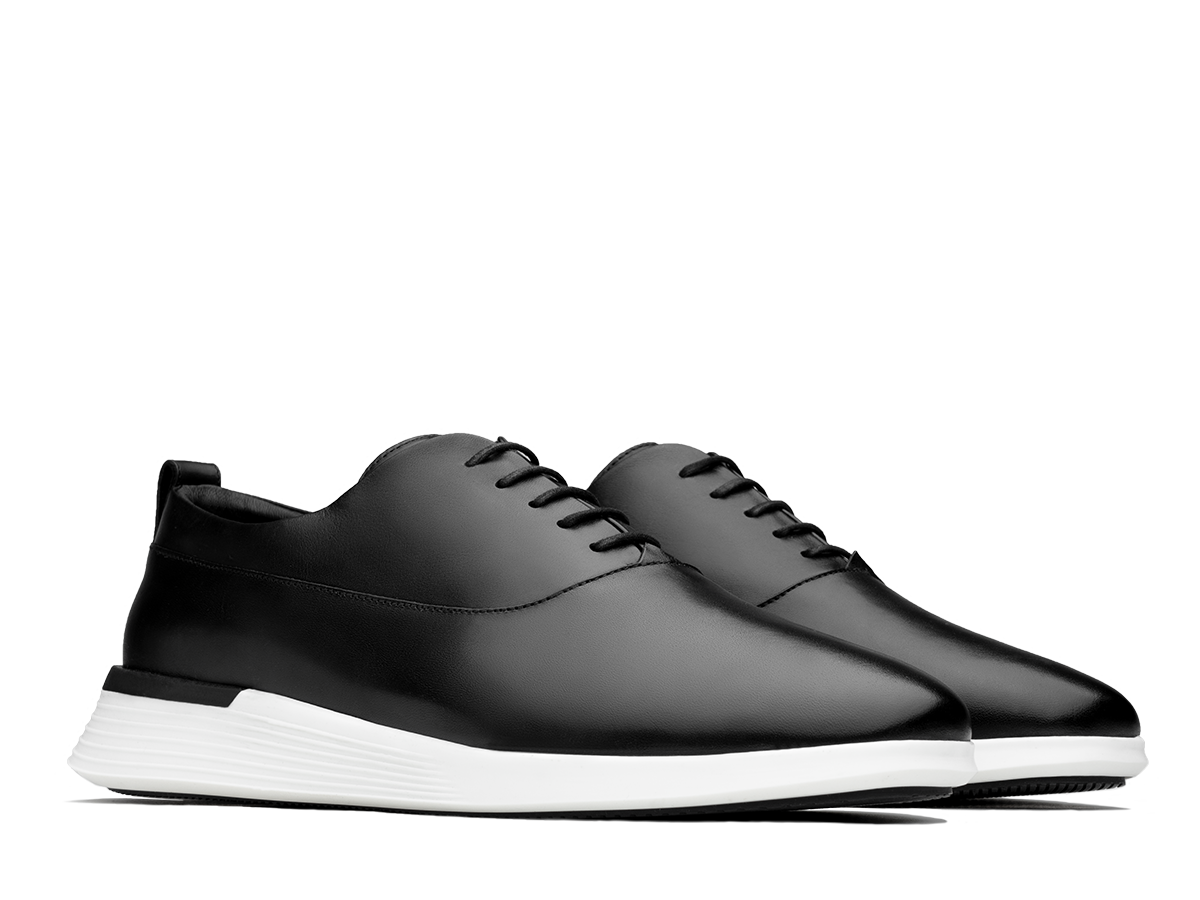 As a result, heritage shoe brands need to adjust to the modern man. Case in point: Cole Haan partnered with Hasan Minhaj on a footwear capsule that borrowed Easter eggs and details expected more from a sneaker collab, including the date the comedian and writer landed a role on “The Daily Show” and the words ‘live’ and ‘survive’ that derive from his father’s influence. These details were made possible by Minhaj, who has an affinity for sneakers, and Jeff Staple and Reed Art Department, who worked with him on the collaboration styles.

Chris Echevarria, who launched Blackstock & Weber in 2018, respects Old World men’s wear traditions and sprezzatura, but sees himself as a product of more recent designers, creatives and brands such as Thom Browne, Band of Outsiders under Scott Sternberg and Mark McNairy. The brand collaborated with the Philadelphia 76ers for NBA All Star 2020 and recently partnered with Throwing Fits podcast hosts and men’s wear-era notables Lawrence Schlossman and James Harris on loafers.

“We tend to be a bit more fluid with our design philosophy and presentation, and I think that’s part of why we’ve gotten the attention we have. I’ve seen something that typically sits on the shelves at traditional shoe stores sell out for us in a few minutes,” said Echevarria.

“When you’re consistently fed something one way, it’s difficult to see it any other way,” said Echevarria. “This brand, like any other creative project, is my opportunity to show the world how I view it.” The brand’s fall 2020 lookbook shows B&W shoes paired with light denim jeans, white socks, white T-shirts and New Era caps, but also with long coats, knitwear, silk scarves and cuffed tweed trousers. Another outfit shows loafers paired with shorts and athletic socks and yet another with gray sweatpants.

With brands such as Rowing Blazers making preppy and yuppie styles edgy, picking up where Ralph Lauren Rugby left off, and Aimé Leon Dore transitioning from French terry ensembles with Air Jordan 1 ‘Chicago’ and ‘Bred’ sneakers to long-sleeve striped polo shirts, shorts and loafers, the time is ripe for these crossover brands.