The philanthropic sock brand was founded on the mission to donate a pair to the homeless community for every pair sold.

A selection of the new Bombas underwear range.

The founders of Bombas had a lofty goal when they launched their sock brand seven years ago: to create a profitable business with a philanthropic mission to donate as many pairs as they sell to the less fortunate.

Fast-forward to today, and the New York-based brand has built a self-sustaining business nearing $250 million in revenue and donated nearly 50 million pairs of socks and T-shirts to the homeless community in the U.S. through a network of 3,500 organizations it has built in all 50 states.

As the brand’s website details: “Our mission since Day One has been to help those experiencing homelessness. That’s why for every item you purchase, we donate an item on your behalf. We thought this was a pretty good idea. Turns out a lot of other people did, too.” Its name is Latin for bumblebee and its motto is: bee better, a mantra that is heat sealed on every product.

And now, Bombas is turning its attention to another basic: men’s and women’s underwear. The collection, which launches today, carries the same promise: for every pair sold, a pair will be donated to the needy. 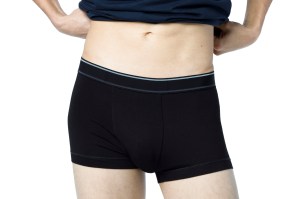 A look from Bombas’s men’s collection.

And while its mission is admirable, its executive and design teams also believe that the Bombas underwear can stand up to any other brand in the market. The company spent two years perfecting the line, developing its own blended fabrics, waistbands and a patent-pending pouch for the men’s collection to ensure it is “special and unique,” according to David Heath, cofounder and chief executive officer.

Although the competition is stiff with an array of brands seeking a foothold in the lucrative underwear market — MeUndies, Mack Weldon, Tommy John, Rhone, Nice Laundry and Bn3th among them — Heath and his partner, chief brand officer Randy Goldberg, have their sites set squarely on the mass market.

They believe brands such as Hanes, Jockey and Fruit of the Loom, mainstays in that segment, have not evolved to meet the needs of the modern consumer, leaving an opening for Bombas.

“We’re not trying to be an Instagram favorite or a cool brand for Millennials,” Heath said. “We want to be the tried-and-true underwear brand for every day. We’re rethinking the Hanes and Jockey model and our plan is to be the best premium basics company.”

That’s been Bombas’s marching orders since Day One. Neither Heath nor Goldberg had an apparel industry background but met when they both worked at Urban Daddy. Heath has also worked at Yucaipa Companies and had launched three other brands in unrelated businesses, while Goldberg had created Pop-Up Flea, a successful weekend retail market, with Michael WIlliams of A Continuous Lean. That business eventually grew to host 85 brands and attract some 20,000 to 30,000 shoppers to its events.

“We bonded over the shared idea of entrepreneurship,” Heath said. And while socks were not even a part of the initial conversations — “They’re not high on the list on entrepreneurial ventures,” Heath said with a laugh — the lightbulb moment came when they saw a post on Facebook saying socks were the most requested item at homeless shelters.

”Socks are an afterthought in terms of donations to homeless shelters,” Goldberg said.  “And it’s really sad that they’re considered a luxury item for 600,000 people in shelters.”

And so following the pathway set down by successful brands such as Toms and Warby Parker in the buy-one-give-one space, Bombas was born.

“We didn’t have grand aspirations to take over the sock world,” Heath said, but instead sought to create a quality product at a fair price that could make a difference. The socks, for example, feature arch support, a seamless toe, stay-up technology, blister tabs and other features.

Their idea won over Daymond John. Although initially skeptical, the FUBU founder invested $200,000 to buy a minority stake in the brand after Heath and Goldberg appeared on “Shark Tank” in 2014. Early on, the team raised around $4 million in funding, but it’s now self-funded.

And so, the founders “applied the same lens and filter” to underwear, Goldberg said, the second most requested item at shelters.

Bombas’s underwear will feature three silhouettes for each gender in either cotton modal — for men and women — or a modal/nylon blend in seamless for women. Women’s models will include thongs, bikini and hipsters in 14 colors in sizes ranges from extra-small to 2XL. The men’s collection will be available in briefs, boxers and boxer-briefs in four colors. 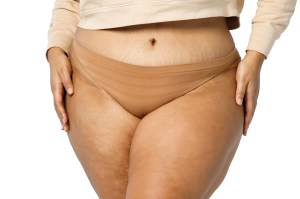 Bombas will offer a wide range of sizes for its women’s underwear.

The large size range is part of Bombas’s inclusive philosophy. “We want to fit the largest amount of people possible,” Heath said. “We’re not trying to just be for the six-pack abs guy or the teen.”

Although this price is markedly higher than that of its targeted competitors — a six-pack of Hanes boxer briefs for men is $19.19 on the Walmart website while a seamless hipster from Jockey for women is $11 — Heath and Goldberg believe their customers will pay the higher prices.

“We sell $12 socks and 80-85 percent of our customers came from mass market brands,” said Heath. And Bombas’s commitment to donate a pair for every pair sold also appeals to its customers’ philanthropic side. “People today want to vote with their money,” Goldberg said.

In the case of all of the socks, Ts and underwear, the donated product is different than that sold directly to consumers. Goldberg said they are specifically designed for the homeless community with reinforced seams, darker colors that show less wear and an antimicrobial treatment since they will be worn for a longer period of time between washings.

Heath said that the initial plan was to launch underwear before T-shirts, which Bombas introduced in the spring of 2019, but the tweaks and details necessary to create the underwear took longer than expected. However, now that the underwear is hitting the market, it allows Bombas to “own everybody’s top drawer,” Goldberg said.

Although Bombas does have a small wholesale business with Nordstrom and Dick’s Sporting Goods, 98 percent of its business is direct-to-consumer. To introduce the collection, Goldberg said the brand will use social media in the beginning and eventually add television and radio ads. But unlike a lot of its competitors, who use sex and skin to sell their underwear, Bombas will stick with a more-gentle messaging, promoting instead the comfort, inclusivity and community it has built over the past seven years.

“We want to be a profitable, old-school business,” Goldberg said, “and everything we do needs to be on-brand.”

Looking ahead, Heath and Goldberg said they see Bombas eventually branching out into other product categories — but ones that make sense such as slippers that double as socks. So don’t expect to see parkas, sundresses or sweaters bearing their bee logo anytime soon.

“We’ve certainly had our dreamer moments,” Heath said, “but we’ve had the same philosophy since we started: to do one thing really well. Now we need to do three things really well. Our plan is go deep in those categories and we believe there’s plenty of room to grow.”