Caruso has set its sights on the American market.

The Milan-based men’s brand has opened a permanent showroom in Midtown Manhattan and is meeting with specialty and department stores during men’s market this week as it strives to regain a foothold in the U.S.

Spearheading the move is Marco Angeloni, the eldest son of former Brioni chief Umberto Angeloni, who remains an “active shareholder” in the business, according to his son.

Caruso is now majority-owned by Fosun, the company’s Chinese partner since 2013. In 2017, when Fosun purchased the controlling stake from Aplomb Srl, Umberto Angeloni’s holding company with Ruggero Magnoni, Marco Angeloni was elevated to chief executive officer from chief operating officer.

Marco Angeloni, who has also worked at Bain & Co., said his father launched the fashion brand a decade ago and opened flagships in both Milan and New York City. Both those stores have since closed and Umberto Angeloni stepped down as ceo when Fosun became the majority owner. Gone, too, are the brand’s trademark mannequins with handlebar mustaches intended to be reminiscent of its namesake, the singer Enrico Caruso. 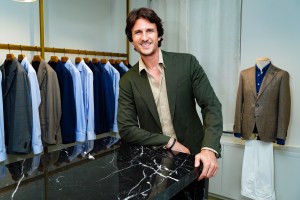 What hasn’t changed, however, is the brand’s quality manufacturing of tailored clothing and upscale sportswear at an affordable price. The collection is manufactured at the comoany’s factories in Italy and fully canvassed suits retail for around $1,700.

Marco Angeloni said that since taking over as ceo, he has been building on the base his father had established for the brand, albeit at a slower pace.

He said the stores, which included a 4,500-square-foot emporium of apparel, art, design and music on East 58th Street in New York, were too elaborate for the nascent brand.

“It was too early for us,” he said. “We made beautiful suits and jackets, but not much else at that point.”

So he said it was time to “put our ego in our pocket,” and build the brand instead through a strong wholesale distribution model before thinking about reopening retail stores. Hence, the new showroom.

The 1,680-square-foot space at 501 Madison Avenue is in the heart of Midtown Manhattan and also boasts an outdoor terrace overlooking the bustling city streets. “It’s more homey, welcoming and warm,” Marco Angeloni said, adding that the company’s Milan showroom is designed to be “like a house.”

There are black marble tables and shelves, brass racks, gray carpet, walls and fabric partitions. Marco Angeloni said the showroom is intended to “reflect Caruso’s strategy to raise the profile of our brand in the United States. While Europe and Japan are our larger markets, accounting for more than 50 percent of overall sales, we are focused on the U.S. as our main expansion opportunity. We believe that the American consumers will be able to appreciate our luxurious yet accessible collection.”

“He respects and loves tailoring,” Angeloni said. His debut collection is centered around jackets with “authentic sartorial soul” and has a “less-is-more attitude.” It’s targeted to a “contemporary man who is not a fashion addict or stuck in the past,” but who appreciates quality. “Our man is relaxed, effortless and elegant.”

The silhouette is not super fitted like a lot of European brands, but instead has a more relaxed and comfortable cut.

The spring colors include blues and grays with unexpected pops of pink, sage, white, brown and dark green.

Angeloni said Nordstrom just bought the collection for a select number of stores and he’s hoping to further expand the brand’s reach. “We’re looking for long-term partners,” he said, adding that specialty stores are a key focus for the brand. “The U.S. is a very small market for us now, but we think Caruso is one of men’s wear best kept secrets and we’re hoping it will be discovered,” he said.