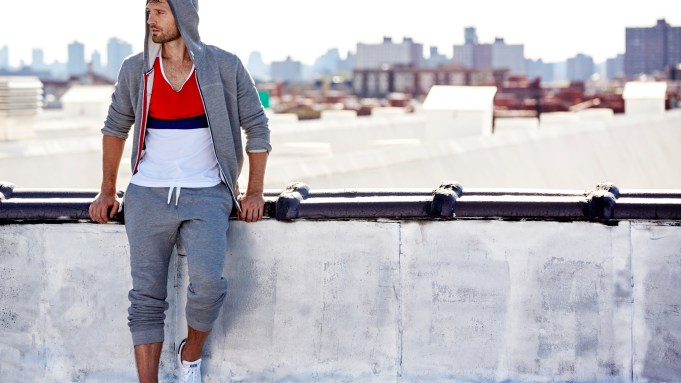 The men’s activewear market might appear to be full, but according to Daniel Shapiro, there was something missing.

In his view, affordable athletic apparel with a preppy point of view was lacking in the category, so he created Fourlaps, which is inspired by vintage photos of Ivy League athletes, modern art and his travels around the world.

“Working out used to be a nice thing to do, and now it’s a permanent part of our lives,” said Shapiro, who formerly held merchandising stints at retailers including American Eagle and Old Navy. “I work out six days a week and I couldn’t figure out why I had to spend so much money to get workout clothes.”

Fourlaps, which stands for the number of laps around a quarter-mile track, includes hoodies and matching sweatpants and sweat shorts, tank tops, workout tops, running shorts, graphic T-shirts and hats. The pieces come in mostly red, navy, gray and white — there’s little to no black in the line — and are all priced under $70.

Shapiro has infused functionality and technical details into the line. For example, the Silver-Charge Tee, which is made in Los Angeles, features XT2 antiodor technology and cooling zones to keep one’s temperature regulated during workouts. Bottoms have three pockets, one specifically for an iPhone that has an antimicrobial liner. Shapiro has also lined most of the collection with the brand’s “Start Before You’re Ready” tagline. The majority of the collection, which is mostly made in China, also includes the reflective Fourlaps logo allowing runners to be seen in the dark.

Shapiro said he’s targeting the 24- to 40-year-old customer and will distribute the line exclusively on its own e-commerce site — he has no plans of pursuing wholesale distribution.

“I feel like the market is moving in that direction and men’s is a great place to be direct-to-consumer because our brand only has four sizes,” said Shapiro, who also plans on offering new products each month.