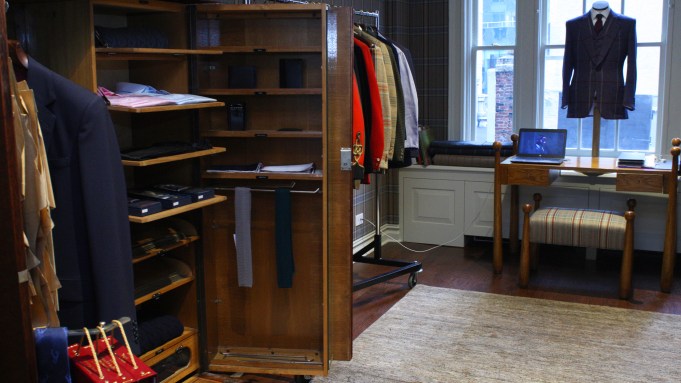 NEW YORK — It took 167 years, but Huntsman has finally set up a permanent home in New York City.

The venerable Savile Row tailor this week opened its first space outside of London — an appointment-only salon at 130 West 57th Street, a multiuse building between Sixth and Seventh Avenues where it will meet customers one-on-one and create bespoke and made-to-measure garments.

Michael Anderson, a senior cutter who is heading and managing the New York location, said Huntsman had been hosting trunk shows here every three to four months, taking a hotel suite in which to service clients. “But we thought, why shouldn’t we be here permanently,” he said.

The salon is designed to feel like a London home and features Huntsman’s house check for the wallpaper and shower curtain in the bathroom. “We wanted something familiar,” Anderson said. “We wanted customers to have a sense of belonging here, and this feels right.”

The salon is on the seventh floor of the building, so there’s not a lot of chance of foot traffic. But that is intentional.

“This is not a traditional retail space,” he said. “It will be a lot of word of mouth and referrals. It’s intended to be a precious, unique club. This is for a man who doesn’t want to wait until his next business trip to London or three months for the next trunk show,” Anderson said.

Huntsman also dabbles in women’s wear, but its work is nearly all men’s wear.

Anderson said the shop is expected to attract British gentlemen who now live in the U.S., as well as the brand’s “huge American following” that includes lawyers, doctors and other upscale businessmen. He said the U.S. market accounts for 40 percent of the company’s business, a figure that will hopefully increase as word of the permanent space gets out.

Huntsman has a long history of dressing celebrities — Gregory Peck was a fan — as well as socialites, and it’s this niche it hopes to attract with the New York salon. The tailor is best known for its classic one-button silhouette in a slim British cut, Anderson said. “It’s something you don’t see everywhere.”

Customers can choose from 4,000 to 5,000 fabrics and can even have their own custom tweed designed by the Huntsman team. The turnaround for a bespoke garment will be 10 to 16 weeks, while made-to-measure will be eight to 10 weeks.

Cutters from the U.K. will visit the shop every eight weeks or so to measure new bespoke customers, but those whose patterns are already on file can merely stop by at their leisure, have a Scotch and work with Anderson to choose their latest fabric.

All of the suits and sport coats will be made in London and suits will retail for around $5,000 and up.

Anderson said the top competitors in the U.S. market are brands such as Kiton, Loro Piana and Brioni — “the top tier,” he said. But Huntsman is “the only real British brand” at that level. “We wanted to be the first to get the ball rolling.”

The brand was purchased by hedge fund multimillionaire Pierre Lagrange in 2013.