Ledbury is celebrating its 10th anniversary with a cash infusion that it will use to fund its growth.

The men’s shirt specialist from Richmond, Va., has closed on a $4.5 million financing round led by Harbert Venture Partners, an early investor in the brand.

Paul Trible, founder and chief executive officer of Ledbury, said the capital will be used to expand its brick-and-mortar presence, including a store in New York’s Greenwich Village. A 1,600-square-foot store at 355 Bleecker Street, between Charles and West 10th Streets, is slated to open sometime next month.

Ledbury operates two stores: a flagship at the brand’s headquarters in Richmond as well as one at Cady’s Alley in Georgetown in Washington, D.C.

“With the closing of our capital raise, we feel like we’re in a spot to use the funds for our growth initiatives,” Trible said. “We’re planning to open around 10 stores over the next three years.”

Trible said the locations will be in major metropolitan areas such as Chicago, Atlanta and San Francisco, as well as smaller markets including Charlotte, N.C., Nashville and Lexington, Ky. The cities are being selected by looking at Ledbury’s strongest online markets.

“We have 50,000 e-commerce customers and our top market is New York,” he said, with many coming from the West Village, Chelsea and SoHo. So it makes sense the company would choose that city for its first store outside the mid-Atlantic.

He also pointed to the recent “renaissance” of Bleecker Street and the high concentration of men’s brands that have stores on the street as other reasons for his decision to open there. “It’s a unique destination for shopping and landlords are now interested in introducing new brands to the neighborhood.” 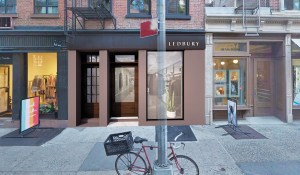 The Bleecker Street store will be located between Charles and West 10th Streets.

Ledbury got its start in 2009 as a direct-to-consumer shirt brand and has since expanded into tailored clothing, sweaters, pants and accessories. E-commerce still accounts for 70 percent of the business, Trible said, but it entered the wholesale market three and a half years ago and now counts Bloomingdale’s, Stitchfix, Trunk Club and 125 specialty stores as customers. “Wholesale is a meaningful piece of our business,” he said.

But Trible has discovered that customers, especially those new to the brand, are more likely to give the company a shot if they can touch and feel the shirts first. In addition, 40 percent of Ledbury’s customers are over age 50 and are more inclined to shop in a store the first time.

“Ledbury will always be a digitally first brand, but we know that nothing is more compelling for our new customers than experiencing the fit and quality of a Ledbury shirt in-person,” he said. “When someone puts our shirt on, they come back again and again. We want to encourage as many of those interactions as possible. By placing brick-and-mortar locations in our top markets, we will introduce new customers to the brand, while simultaneously deepening our relationships with existing customers as they experience our made-to-measure program and full collection of men’s wear.”

Made-to-measure shirts and suits now account for 30 percent of Ledbury’s sales in stores and a lounge specially created for this category will be included in each store.

Those stores will generally measure around 2,000 square feet or under, he said. “That’s our sweet spot.” The Richmond store is 3,000 square feet, but it also includes the company’s shirt workshop.

Since its founding a decade ago, Ledbury has offered some 3,000 styles of shirts. They are offered in two fits: classic or tailored, and retail for $125 to $185 with the majority of the sales in the $125 to $135 range. For a more price-sensitive customer, the brand recently added an Essentials collection of dress shirts for $98 that is made from Italian fabrics and with mother-of-pearl buttons.

Every week, the brand offers a special “Sunday shirting” that it promotes to customers online. “We have a big tailored clothing and sweater business, but we’re still a shirtmaker at our core,” Trible said.

To commemorate its anniversary, Ledbury is partnering with other brands on releases of limited-edition product. These include a waxed cotton jacket with Tom Beckbe, as well as shoes with the Richmond-based Rider Boots and jeans with Shockoe.

Trible said there are no plans to add other categories of product at this point or to go into women’s wear. “Our plan is to stick with men’s wear and expand our brick-and-mortar,” he said. “We didn’t want to go out and raise $25 million, but just enough to succeed. Having three channels is very important to us and we’re planning to scale them up and increase each.”