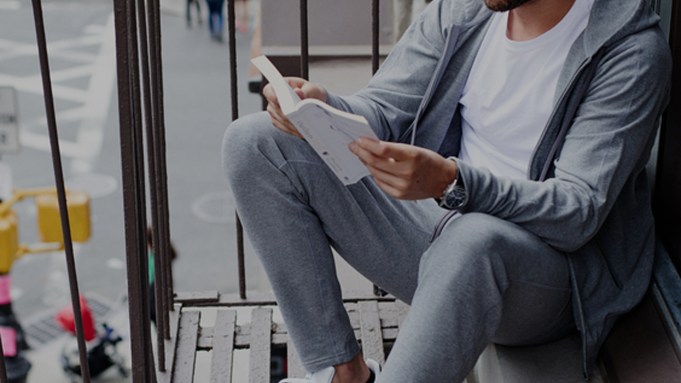 Mack Weldon is moving beyond socks and underwear.

The e-commerce retailer, which launched in 2012, is known for its innerwear made from performance fabrics.

Founders Brian Berger and Michael Isaacman are bringing that signature into the apparel arena with a pair of sweatpants, a matching hoodie and a merino wool program that includes a short and long sleeve T-shirt in addition to long underwear. The sweats have a soft launch this week and the merino wool base layers will be available at the end of the month on Mack Weldon’s e-commerce site.

The hoodie, which retails for $88, and the sweatpants, which retail for $78, are made from a cotton French terry stretch material and come in gray, navy and white. The merino wool T-shirts range from $68 to $88.

According to Isaacman, who’s held merchandising positions at Ralph Lauren and Tommy Hilfiger, the brand is attempting to bring elevated leisurewear that doesn’t look like activewear to the market.

“Most sweats have a more loose, casual aesthetic, and our line presents a much more refined silhouette,” Isaacman said. “We say it’s made for life beyond nine to five. You can wear it out to dinner and when walking the dog. It’s designed and engineered for adults.”

For spring, the brand, which secured $4 million in Series A funding earlier this year, will introduce a short version of the sweatpants along with a fine dress sock. It is also working on swimwear.

Mack Weldon does most of its business through its e-commerce site, but it’s also carried at a small selection of retailers in the U.S. including Equinox, Craft Atlantic and Bespoke Post. Trunk Club will start carrying the brand this spring. For 2016 they have plans to explore more retail partnerships and pop-up shops. Berger told WWD that the business is expected to grow by 80 percent this year.