The men’s loungewear brand is gearing up for growth with help from intimates vet Carole Hochman. 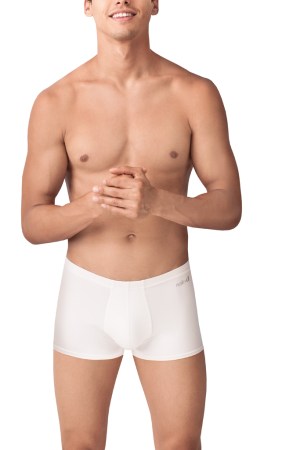 Naked is gearing up for growth.

Hochman, who met Naked’s founder Joel Primus through her son, is no stranger to developing brands. She spent more than 30 years heading up the Carole Hochman Design Group, which produced Hochman’s line of sleepwear and handled the innerwear licenses for designers including Oscar de la Renta, Christian Dior and Betsey Johnson. Intimate apparel giant Komar purchased Hochman’s company in 2010 and she resigned in 2013.

“Once you sell your company, it’s not the best place to be,” Hochman said. “This is like my second act.”

Hochman’s main focus at Naked is to attract new customers. She’s attempting to do this by updating Naked’s collection to include new styles of underwear, sleepwear and loungewear and bring the prices down. Using her connections in sourcing and manufacturing, the price range for a pair of underwear has dropped to $28 to $38 from $44 to $46.

The new men’s collection designed by Hochman was delivered to Holt Renfrew, Nordstrom and The Hudson’s Bay Co. last month. The line, which is made from cotton and cotton blends, includes four collections of underwear — Signature, Active, Luxury and Essential — that come in three silhouettes — boxer brief, brief and trunk. The Essential and Signature collections also include a crew and V-neck T-shirt.

There is also Naked Silver, the top-of-the-line collection that contains thread that has been bonded with silver to prevent odor-causing bacteria, and Naked Tencel, a line made with Tencel.

“You can change a guy’s life with the right product,” Primus said.

On the branding side, Connecticut-based Case Study Brands has elevated the packaging and logo to line up with Naked’s understated product offering and make it easy for shoppers to identify the brand and how it’s different from other men’s underwear on the market.

The new logo is sleek with a transparent “e,” and the updated packaging features boxes with an open flap so customers can feel the product. The boxes are colored by product style and showcase Naked Truths, or brand philosophies, such as, “If you run a race, will your underwear be able to keep up? You’d hate to leave them at the starting line. That might be a bit embarrassing. Get Naked.”

“With Naked, we want it to be about you,” Primus said. “It’s anti-Victoria’s Secret. It’s against the grain of highly sexualized product.”

The campaign, which launches on Naked’s social media platforms in mid-May, is titled “Collect Experiences, Not Possessions,” and will highlight a new role model every three weeks. The first is Arjay Smith, a former child actor who was recently in the final season of the popular FX Series “Sons of Anarchy,” and produces music. Customers will be encouraged to participate in the campaign by sharing their role models on social media.

Primus, a former elite runner who lost his athletic scholarship due to a ruptured Achilles, was hiking through Peru when he thought of the idea for Naked. He bought a pair of cotton underwear but wasn’t happy with its performance. “I wanted to wear something that was luxurious but functional,” he said.

The Vancouver native then appeared on the “Dragons’ Den,” Canada’s answer to “Shark Tank,” in 2010, and a panelist offered him $75,000 for his business. He declined the offer, but his participation on the show piqued investors’ interest and he raised $140,000 before Holt Renfrew picked up the product in 2010. Nordstrom was another early partner and added the line in 2012. Naked has also been sold in Hudson’s Bay since 2014.

According to Hochman, Naked has cut $3.5 million worth of product this year, but she expects to double the business in 2016. Hochman also foresees Naked becoming a full lifestyle brand. She’s planning to add a women’s collection for fall and envisions the line one day expanding into home goods as well.

Hochman is hoping that the Naked female customer will help expand the brand’s male customer base by educating them about the product. “The majority of men just don’t have an idea. Women buy their underwear,” Hochman said. “Wearing a no-support cotton boxer brief is like women wearing the wrong-size bra. Men can feel better than they do.”