The ties will retail for $49.50 and 10 percent of the proceeds will go to Nye's Planetary Society organization. 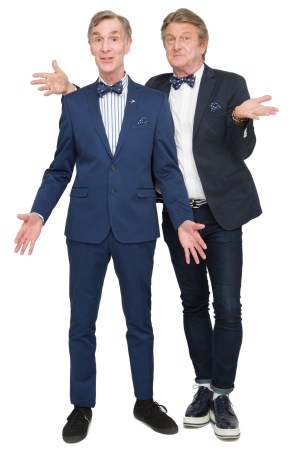 Who knew Nick Graham was a science geek? But the designer and former Joe Boxer chief sheepishly admitted that he is a diehard fan of British physicist Brian Cox and his Infinite Monkey Cage on the BBC. And it was through this association that he met the U.S.’ Bill Nye the Science Guy.

“I grew up watching him with my kids,” Graham said. “So I went up to him and asked if he wanted to do a bow tie line and he said, ‘Of course!’ He is Mr. Bow Tie and is probably the most visible person in the world who wears bow ties.”

The culmination of that conversation will be unveiled today when the limited-edition Nick Graham x Bill Nye collection is released. The timing is also tied to the release of Nye’s new book about climate change, “Unstoppable.”

“I like his message and how he presents it,” Graham said. “He appeals to a 22-34 demographic and has 4.7 million followers. Not quite Beyoncé, but…”

The collection, which includes quirky patterns such as the periodic table and Nye’s head in addition to “good old-fashioned polka dots and stripes,” are being sold on Graham’s Web site as well as in unorthodox locations such as the American Museum of Natural History’s gift shop.

Graham said Nye was quite involved in the design of the ties and eagerly sketched ideas on a pad. “We sat here for four hours and I’ve never laughed so hard or been so confused,” he said.

The ties will retail for $49.50 and 10 percent of the proceeds go to the Planetary Society, Nye’s nonprofit organization that Graham said looks for life on other planets. “We’re hoping he finds one with some department stores.”