The men's brand is focusing on volume-producing updated basics as well as a new technically skewed line designed for comfort.

A look from Perry Ellis Motion.

In a move to adapt to today’s customers and the new retail environment, the men’s brand has shifted its focus to concentrate more on core product and less on fashion. This fall, it also will introduce Perry Ellis Motion, a collection designed to address ongoing consumer demand for comfort and mobility in their dress wardrobe.

“We’re not the first people to put technical product on the floor,” admitted Jason Zuckerman, who assumed the post of president of the Perry Ellis brand in January 2019. “But this indicates a convergence of what we do: polished, dressy sportswear that is focused on performance and comfort.” 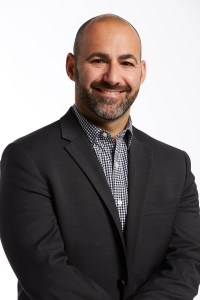 Unlike other brands such as Rhone, Mizzen+Main, Ministry of Supply and even Van Heusen, the Perry Ellis Motion line is a full collection, with an assortment that ranges from a packable suit and wrinkle-free dress shirts to pullovers and performance flannels.

“We’re saying the product is ‘life ready,’” Zuckerman said of the brand’s tag line. “You can wear it to the office or to play golf.” In addition, it gels with the main Perry Ellis line, he said. “It crosses all categories, but still looks like Perry Ellis.”

“The lines are becoming more blurred,” said Martin Roos, executive vice president of design, global merchandising and strategy for Perry Ellis. “When you look at Rhone or Ministry of Supply, they’re very category specific.” But Motion offers all the key pieces in most men’s wardrobes.

Key items in the line, which will hit floors in September, include Motion bottoms in both casual and dress models with four-way stretch that is moisture-wicking, water-repellent and stain-resistant and has a stretch waistband. Woven shirts have the same attributes and feature the brand’s trademark point collar with a hidden button, and a movement seam on the back. There is a windproof pullover and a reversible sport coat as well as quarter-zip merino sweaters. The core suit in the line is polyester crepe stretch that will be sold with a hand carrier in which it can be folded and packed.

Feldenkreis is the son of George Feldenkreis, the former chairman of PEI, who completed a $437 million deal to buy back the company he founded more than 50 years ago and take it private last year. To pay for the acquisition, there was financing through an asset-backed revolving loan underwritten by Wells Fargo Bank, George Feldenkreis secured a $282 million multitranche term financing facility with Fortress Credit Advisors and the Feldenkreis family also contributed equity to the deal.

Without providing figures, Oscar Feldenkreis said the Perry Ellis brand is “doing well. And I’m happy we’re not a public company today. It allows us to do things strategically with a long-term view.” He said the company continues to operate within its budgets and is “investing where it makes sense. It’s business as usual.”

He also shrugged off the potential pressure of carrying such a debt load. “We came from Cuba with zero,” he said, referring to his father’s now-famous story of escaping the regime of Fidel Castro and relocating to the U.S., where he founded Perry Ellis’ predecessor company, Supreme International, in 1967. Supreme acquired the Perry Ellis brand in 1999 and the company changed its name.

Although Perry Ellis operates more than 70 of its own stores — a mix of full-price and outlets — the bulk of its business continues to come from department stores such as Macy’s and Dillard’s. “We’re looking for other locations [for freestanding stores],” Feldkenkreis said, “but at the end of the day, Perry belongs in the department store model. We prefer to trade there.”

With this in mind, the management team believes Motion offers an opportunity to these retailers. “We believe we’re the first to pull a collection together and market it,” Zuckerman said.

In fact, the company is so confident that Motion will open up a new sales channel that Feldenkreis is projecting that it can eventually represent 25 percent of the branded Perry Ellis business and be expanded into other categories.

But that’s just one prong to the brand’s strategy. Zuckerman said since he joined 14 months ago, Perry Ellis has also “reengineered the brand architecture to maximize what’s working.”

“The sportswear collection is the mother ship,” he said. “Being a refined, polished sportswear brand is our guard rails. But in order to do volume, we need franchise items.”

So starting this fall, there will be more emphasis placed on core pieces such as the Resist Spill Chino, a machine-washable suit, and Icon Polo, which can live on store shelves for a longer time.

“We’re balancing fashion with key items to support and sustain the growth of the business,” Feldenkreis said. “We never really had a lot of core fashion basics that can live 12 to 18 months rather than 90 days before they get marked down.”

That’s not to say that the key items are just “dumb product,” Zuckerman stressed, but rather volume-driving pieces. The polo, for example, has a striped collar and cuffs and is not just a solid basic. “We built this at the expense of really aggressive fashion,” he said, adding that there will still be some fashion pieces to complement the assortment.

In October, Perry Ellis parted ways with its creative director Michael Maccari after six years. At the time of his departure, Feldenkreis said the plan was to replace him. That’s still the plan, he said, adding that the brand continues to interview potential candidates.

But Feldenkreis said that with rare exceptions — he singled out Alessandro Michele at Gucci as one — most brands today don’t need a high-profile designer. He pointed to Rhone, Suit Supply, Everlane and other brands that have been successful without having a well-known designer on board.

In the case of Perry Ellis, Feldenkreis said, the company needs someone who “understands the vision and the DNA of the brand.” He said Perry Ellis had stretches when it was without a creative director and succeeded, and the design team in place now is talented and able to zero in on what the customer is looking for. “The job description of a creative director has changed,” he said. “They need a business, creative and marketing background and the ability to understand the world we live in today.”

Even so, Maccari was instrumental in the relaunch of Perry Ellis America, Feldenkreis has said, a line that features reimagined versions of original pieces from the Eighties and Nineties. That launch has been so successful that the company is hoping to replicate it with Motion, according to Zuckerman.

“We have various marketing tactics planned for Motion,” Zuckerman said. These include promoting it on the brand’s social platforms as well as through a yearlong partnership with Bleacher Report, a popular web site that focuses on sports and sport culture, that kicked off at the NBA All-Star weekend last month in Chicago.

A similar partnership will be revealed with another digital company soon, Feldenkreis said.

Beyond that, Feldenkreis said Perry Ellis continues to expand its reach outside the U.S., which represents around 15 percent of sales. “We feel it should be closer to 25 to 30 percent,” he said.

He said the company is close to inking a deal with a company in Asia to bring the Perry Ellis America brand there, a license in Mexico was recently brought back in-house, and there are deals in Chile, Turkey, Croatia and other Eastern European countries. The company is also working on a joint venture in Israel. “We’re continuing to explore new partners on the international scene,” Feldenkreis said, adding that the company is also “talking to retailers in the U.K. to launch Motion there exclusively.”

But while the brand is upbeat about its merchandising plan, it is also concerned about the impact of the coronavirus epidemic.

“Everyone is affected,” Feldenkreis said, adding that the virus is expected to present a “challenge to deliveries in the second quarter.” Although the company only produces 20 percent of its collection in China, the country is also a major source of raw materials and trims. “Even if you’re not making things there, it’s all interconnected,” he said.