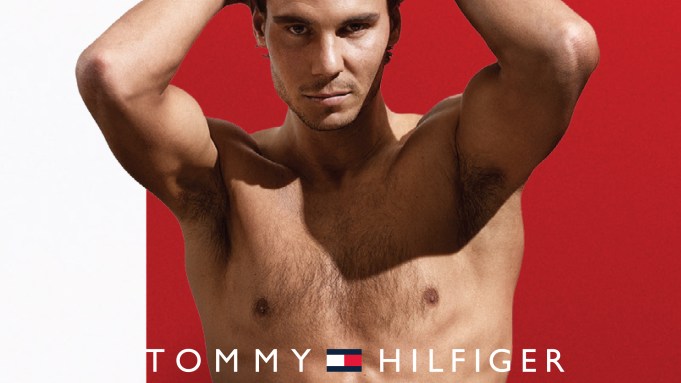 Rafael Nadal is ready to bask in the fashion spotlight — in his underwear.

The world’s eighth-ranked tennis player is about to make his first appearance as brand ambassador for Tommy Hilfiger underwear and tailored clothing, and a new men’s fragrance, TH Bold. The 29-year-old Nadal signed a two-year agreement with the brand, beginning this fall.

The tennis star will appear at this afternoon at an exclusive celebrity tennis tournament at Bryant Park in New York, hosted by Hilfiger and attended by such people as Jane Lynch, Lake Bell, Martha Stewart, Chanel Iman, Hannah Davis and Noah Mills. It is open to the public at 12:30 p.m., with V.I.P. seating. That evening, he will also participate with Hilfiger in an appearance and question-and-answer segment, moderated by Lloyd Boston, in Macy’s fragrance department.

Hilfiger told WWD that the brand this fall is relaunching its underwear business — which it has had for 20 years — with new, more technical product, including a four-way stretch microfiber with a sleek waistband. “Because we’re so global now, Rafael Nadal resonates globally in most countries in the world. He also looks amazing in the underwear and the clothes,” Hilfiger said.

“He’s not doctored up, that’s the real guy,” said the designer, discussing the underwear ads.

Having parent company PVH Corp., which has a large Calvin Klein Underwear business, inspired them to rebuild the Hilfiger underwear brand. “We see huge potential. We started to take this segment of the business very seriously. We thought in order to do it we would really need a global icon,” he said.

Hilfiger and Nadal have been friendly for several years, having met while Nadal was playing a tennis tournament in Monaco. Nadal won’t have his name on the product, but he will appear in a major campaign that breaks today and encompasses print, outdoor, television and digital advertising globally. Billboards showcasing Nadal in Hilfiger underwear will go up in such cities as New York, Los Angeles, Paris, Hong Kong, Mexico City and Melbourne, Australia. While the fragrance and underwear campaigns will run throughout the fall, the tailored clothing ads break in the spring.

Avery Baker, chief marketing and brand officer of Hilfiger, declined to disclose the total ad budget, but said the company will double its media spend for fall. The Nadal campaign is skewed more toward the male consumer, while “The Hilfigers” football-themed campaign is more female-oriented, she said. Both will run this fall. Under the creative direction of Laird & Partners, Hilfiger’s campaign imagery was shot by Michael Janssen in Mallorca, Spain, down the block from Nadal’s home. To further support the global initiative and collaboration, Nadal will attend Hilfiger launch events in North America, Europe and Asia. Baker noted that Tuesday’s tennis tournament will be live-streamed on Periscope, and the campaign will also appear on social media channels such as Instagram, Twitter and Facebook. The hashtag is #tommyxnadal.

Asked whether Nadal’s tough year on the tennis circuit would have any impact on the campaign’s success, Hilfiger said: “He just won the German Open. These athletes all have their ebbs and flows. When you’re as strong as Nadal, you come back. When you’re in the top five, you have an off season and off match,” Hilfiger said. Last Thursday, Nadal lost to a fellow Spaniard, 23rd ranked Feliciano Lopez, in the Western & Southern Open outside Cincinnati. Although he has won three titles at smaller tournaments this year, his ranking has sunk to its lowest point since he won his first Grand Slam title at the 2005 French Open.

Nadal has been ranked among the world’s top five tennis players since 2003 and is considered one of the best clay court players in history. At the age of 24, he became the youngest athlete to complete the Grand Slam and is the second player in the world to have completed the “Career Golden Slam,” after winning the French, Australian and U.S. Opens; Wimbledon, and a 2008 Olympic gold medal. He holds a record for his nine French Open victories, the most won by a single player, including five consecutive title wins.

This isn’t the first time Nadal has posed in underwear. In 2011, he appeared with Megan Fox in steamy ads for Emporio Armani Underwear and Armani Jeans.