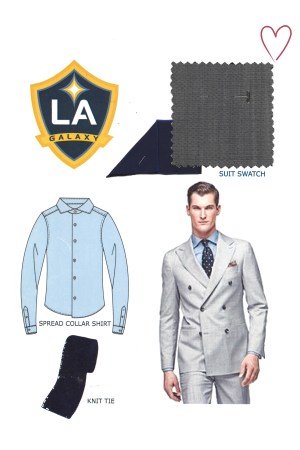 Samuelsohn is shaking off the dust for spring.

The Canadian men’s tailored clothing brand, which was founded in Montreal in 1923, is repositioning itself as a luxury performance label, a push that will be supported by a strong marketing campaign and some high-profile investments.

Since 2010, Samuelsohn has been owned by Grano Retail Investments, an investment and advisory company headed by Stephen Granovsky, which purchased what had been a family-owned business from the Samuelsohn family. Grano also owns all the assets of the Hickey Freeman brand.

“This is a clear stage of development in the Samuelsohn growth story,” Granovsky told WWD.

He said Samuelsohn currently has sales of around $50 million and “it should be $100 million. So there’s a great reward if we do it right.”

From 2011 through 2016, sales have doubled, according to Arnold Brant Silverstone, president and chief creative officer. “It’s a diamond in the rough. It’s been around since 1923 and makes a great product.”

So for the past year or more, the company has worked through a brand repositioning that will focus on providing product with high-end luxury fabrics and details as well as performance attributes. Darsses said competitors including Canali, Ermenegildo Zegna and others offer either performance or luxury, but not both.

The first step in the process was for Samuelsohn to exit its 57th Street offices and move into a sleek new 3,500-square-foot showroom in the bustling NoMad section of Manhattan on 24th Street.

Next, it updated its tagline, which is now “Passion + Performance;” its logo, which includes labels with a silver background and red lettering, and mannequins and hangers of the same silver color. The silver is designed to indicate high-tech.

In terms of product, Samuelsohn is still producing a full-canvas handmade garment at its factory in Montreal, but the focus has turned to more innovative fabrics with technical attributes. For example, Ice Wool, a super 150s wool that has been shocked by repeated heatings and coolings to create a natural water-, wrinkle- and stain-resistance, is being used for suits and sport coats.

Cooltex Bermberg linings that wick moisture and deflect heat have replaced the non-technical linings of the past. Buttons have been upgraded and are now genuine horn, Corozo nut and mother-of-pearl to guard against breakage.

“We’re also bringing the heart back,” Darsses said. The brand had formerly sewn a red heart into every garment. That was abandoned in 2011 but the heart will now be included under the collar of the garments on the turn-back tab.

The increased focus on technology has led to a small uptick in prices of around 10 percent, Silverstone said. An off-the-rack suit is now $1,395, up from $1,295. Made-to-measure  garments are also increasing by the same percentage.

Samuelsohn has updated its web site to focus more on product — it does no e-commerce — and has also partnered with the L.A. Galaxy soccer team to be the new face of the brand and appear in its marketing initiatives.

“We’re the official tailored clothing outfitters for the Galaxy,” Darsses said, noting that each player and staff member was fitted for two suits, one in blue and the other in gray. “Each player was able to choose their own details,” she added, noting that some opted for vests, others for double-breasted styles, etc.

“We never had an official outfitter before,” said Chris Klein, president of the Galaxy. “But their style off the field is important to our players and we’ve been looking for this type of partnership.”

Several players — including Robbie Keane, Steven Gerrard and A.J. DeLagarza — will be used in the Samuelsohn print and digital campaign for spring 2017. The team is also promoting the partnership in its social media channels. Klein said the players have embraced the brand and were quite “engaged” during the fittings. “They not only love fashion, but they have smart opinions about it too,” he said.

While the association with the Galaxy is new, Samuelsohn is continuing with its A.B.S. 10 initiative. This is the brand’s take on the top 10 trends of the season: five “core” products and five fashion pieces, Silverstone said. For spring, the brand is offering the Ice Wool suit and a Featherlite seersucker travel blazer that speak to its new luxury performance push.

Samuelsohn has also branched out into sportswear for the first time, offering high-end luxury pieces such as sport shirts, slacks and outerwear that tie back into its clothing.

Coming down the pike for next year is a new made-to-measure program. Samuelsohn is working with key gaming companies in Canada to create a 3-D touch-screen digital mirror where customers can select a swatch, scan it and pick the attributes they desire such as notch lapel, patch pockets and custom linings. An avatar is then created that rotates so the customers can actually see how the suit will look.

While this technology is not expected to be completed for six months, the company expects it will serve to further increase sales in this category when it is implemented.

Granovsky said the goal is to convert from a “clothing company that needs a little technology into a technology company that sells clothing. Tailored clothing is the least developed business in terms of technology, but we think this will put us head and shoulders ahead. It’s time to redefine the trunk show, which is so boring and so stale.”

Darsses said the new Samuelsohn will be promoted heavily. “The marketing budget will double,” she said. Granovsky said the brand will spend more than $1 million, which represents a higher percentage of sales than most of its competitors.

Granovsky admitted that the business climate was “tough right now,” but said this is the time to “double down. We are taking an ambitious approach to gain market share,” he said. “We’re seeing that we have the number-one or number-two sell through where we have a presence. So we believe that while there might not be a short-term reward, long-term we think it’s the right time.”