When Gihan Amarasiriwardena of Ministry of Supply took to the starting line of the MerryThon half-marathon in Gloucester, Mass., on Dec. 6, he had more than one goal in mind.

The former cross-country and track athlete had his sights set on breaking the Guinness Book of World Records’ fastest half-marathon time for a runner wearing a suit. Even if he weren’t successful, the buzz would serve to promote the brand’s newest innovation, a Toray-developed fabric that offers performance features such as stretch, wrinkle-resistance and breathability but with enough structure to look good in the office.

Amarasiriwardena did indeed break the record, running a 1:24:41 and coming in ninth overall. And thanks to his Aviator 2 jacket and pants, he barely broke a sweat, despite his 6:29 pace. The former record-holder had raced in an Indochino custom suit and ran 11 minutes slower.

“It was a challenge made specifically for us,” Amarasiriwardena said with a laugh. “And it proved the four-way stretch of the garment.”

Boston-based Ministry of Supply was founded by Amarasiriwardena and a couple of his buddies from the Massachusetts Institute of Technology four years ago as a line of technologically savvy dress shirts. Since that time, the brand has expanded into a full line of men’s wear that uses research and science to create pieces that perform and still look good.

The Aviator, which retails for $348 for the blazer and $138 for the pants, offers a warplike material that is lightweight and flexible with four-way stretch. “We take our inspiration from the athletic sector,” Amarasiriwardena said. “It was designed for the active urban professional who might want to bike to work and not be restricted, or for someone who wants to be comfortable and well dressed after a 12-hour flight.”

It is also trend-right for today’s man.

The ath-leisure movement that has transformed the sportswear market over the past few years is now impacting tailored clothing as well. While not everyone will don a suit for a jog or bike ride to the office, performance fabrics and features have become a sought-after commodity within the men’s clothing market.

“The magic word is ‘stretch,’” said Ronny Wurtzburger, president of Peerless Clothes, the country’s largest clothing manufacturer. “That’s what’s exciting the customer and having him try something new.”

While the overall clothing business continues to struggle under a weak sales trend, including during the holiday season, when men do shop, they’re looking for comfort and performance features such as washability and wrinkle-resistance.

Overall, Wurtzburger said, the clothing business “is a little difficult,” particularly nested suits. Both separates and sport coats are performing better and the “new blues” are the leading colorway. Formalwear is also seeing an uptick, particularly tuxedo jackets that men are wearing with jeans.

“But nothing is a rocket ship,” he said.

What’s suffering the most this season is outerwear, as the warm temperatures around the country have kept shoppers from buying coats. “It’s December, and no one has an overcoat on,” Wurtzburger bemoaned. “We better get some cold weather in a hurry.”

Whether in coats or suits, the Peerless president believes that it’s fashion that is going to save the clothing business. “He already has black and gray suits, so we’re trying to add more fashion into the mix.” That can translate into updated colors such as cobalt blue, camel or burgundy; performance attributes, or more-modern styles, such as slim fit.

“The men’s wear customer is accepting stretch and slim,” he said, “but not too slim.”

Arnold Silverstone, president and chief creative officer of Samuelsohn and Hickey Freeman, agreed that the clothing business has been “challenging and spotty. I don’t fully understand it. Unemployment is down, the economy is up and things are decent. Maybe it’s the uncertainty with the election and the threat of terrorism. But there’s no reason business should be this slow.”

That being said, the company’s brands are still growing, “but just not at the same rate.” For spring, specialty store orders were up 20 percent, he said.

Silverstone looks at challenging times as an opportunity to learn and improve. “When things get tough, I ask questions about what I can do better. And value becomes more important,” he said.

For fall, Samuelsohn and Hickey will “continue to push the envelope on innovation.” He said the company has an entire performance line featuring fabrics such as Ice Wool, which uses a high heating and cooling technique to shock wool into providing natural resistance to water and stains.

Beyond performance, Silverstone said he sees opportunities in all categories, “particularly sport coats which are the fastest-growing segment. Our initial orders for fall ’16 are up dramatically.”

Joe Gordon, president of MC Coat, a division of Marcraft Apparel Group, said separates are a real standout for the company, particularly from the Tommy Hilfiger brand, which is sold at Macy’s. “The sport coat business at Macy’s quadrupled,” he said. “You can wear them with jeans or khakis. And it’s the soft, less-constructed sport coats with stretch in the fabric that are comfortable to wear.”

He said customers today are “looking for performance in their garments, so where we can, we add stretch.”

Shoppers are also looking for updated blue hues. “Blue is definitely the new black,” Gordon said. But while sport coats are the standout, suits are struggling. “The suit business is not growing,” he said.

Looking ahead to fall ’16, Marcraft will focus on softer construction and performance features, such as stretch blazers. “You can really feel the garment move, and that’s doing well,” Gordon said.

At Suitsupply, the company doesn’t offer performance fabrics per se, but does have a travel collection that is designed to look good for men on the road. It’s one of the products that is performing for the moderately priced brand, whose suits open at $399 and average $469 to $569.

The Dutch label, which operates 17 stores in the U.S. as well as shops at Stanley Korshak and Bloomingdale’s, said lightweight jackets, tuxedos and seasonal separates have been the standouts.

Nish de Gruiter, vice president of Suitsupply USA Inc., said even outerwear sales are holding their own. “We don’t have goose down, but we have cashmere overcoats.”

For fall, de Gruiter said the company will offer rich textures and earthy colors in suits and sport coats, along with knitwear and soft cashmere coats that have been inspired by the rugged landscape of the Middle East.

Even though Suitsupply plans to add eight to 10 stores in the U.S. in 2016, including its first mall store in Roosevelt Field on Long Island, de Gruiter said e-commerce continues to be the “strongest business we have. It’s very convenient and easy, and we offer free returns so sometimes guys will buy three suits and return two that don’t fit.” 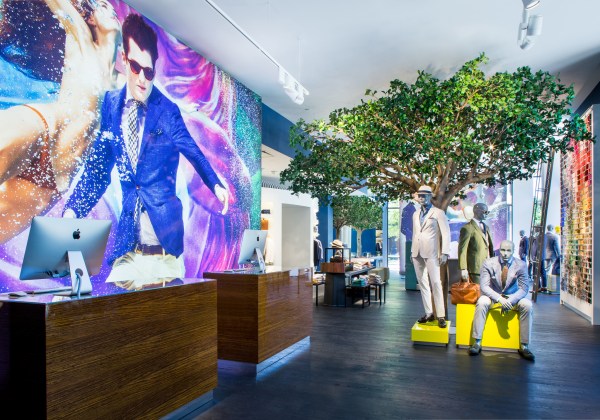 Inside the Suitsupply Dallas store.