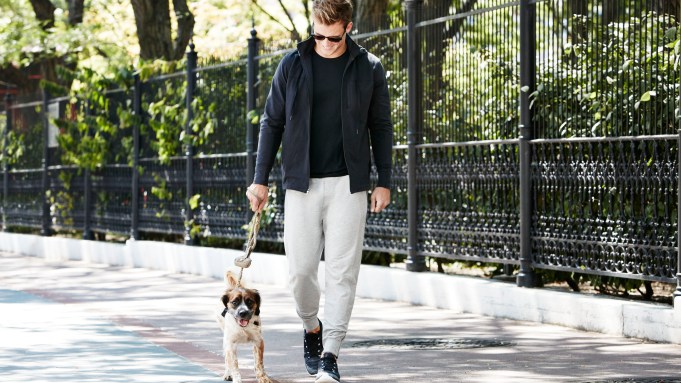 Even before the men’s underwear brand started advertising on Stern’s popular Sirius XM Radio show, the controversial host was the unofficial brand ambassador for its underwear, which is designed to prevent wedgies, loose waistbands and the need to readjust.

Tom Patterson, a former medical salesman who started the business in 2008, told WWD that Stern was gifted the underwear by an ad agency and has been a loyal customer ever since.

Now Tommy John is bringing its focus on function to the ath-leisure category with a hoodie, sweatpants and sweatshirt made of French terry along with a long-sleeve Henley. The line, which retails from $72 to $120, is available starting today on Tommy John’s e-commerce site.

Much like Tommy John’s no-slip socks and undershirts that are supposed to never come untucked, the ath-leisure line hones in on special design details that elevate the product. The pieces feature four-way stretch fabric that doesn’t lose its shape, antimicrobial mesh pocketing that keeps the hands warm and the pockets clean, and stay-in-place drawstrings that can’t be pulled out of the garment.

“Quality is becoming more important to men and they are expecting more,” said Patterson.

This launch follows the introduction of the Air collection, which hit the market in October and consists of an undershirt and a pair of underwear made from lightweight, moisture wicking and antimicrobial fabric that can air-dry in less than four hours.

Last year Patterson brought on Josh Dean, who previously worked in marketing at Chobani and Unilever, to revamp and upgrade Tommy John’s branding.

Along with a redesigned e-commerce site, the marketing has focused on radio, print and digital advertising. Its campaign, “The Big Adjustment,” which features men in various scenarios — a police officer writing a ticket and a soldier at combat — animatedly struggling to adjust their underwear.

“Our customers don’t want to see a European soccer player stripped down in their underwear,” Patterson said. “We want to be a premium but approachable brand.”

Tommy John, which is based in New York City, does most of its business online, but is carried in Nordstrom and is launching in Bloomingdale’s and Dillard’s in the coming months. The brand is also stocked in men’s specialty stores and Birchbox Man.