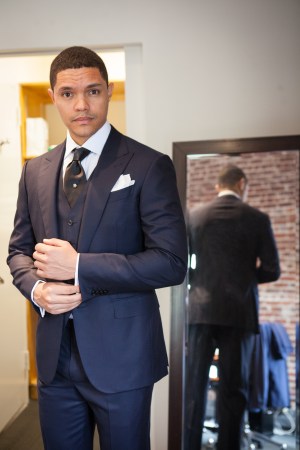 NEW YORK — When Trevor Noah attended the Costume Institute Gala for the first time last May, he was still basically unknown in the U.S. The South African stand-up comedian had recently been named to succeed Jon Stewart as the host of “The Daily Show” on Comedy Central, but he didn’t take over the duties until the fall.

He still attended the event, though, and found himself rubbing elbows with the movers and shakers in entertainment and fashion.

“Last year, nobody knew me,” Noah said during a fitting for this year’s gala at his West Side office. “The first time you go, you’re afraid. You don’t want to touch anything or bump into anyone. You’re looking at the exhibits and then Beyoncé and Jay Z walk by. So you start introducing yourself to people you already know.

“Beyoncé, it’s Trevor, nice to meet you. How do you spell that? Is that French? Oui, non? It’s not normal.”

Hanging out with musical royalty is a far cry from Noah’s modest upbringing in Johannesburg, where he was raised by his mother and maternal grandmother, and came to terms with his mixed race heritage — which has become a recurring theme for his comedy routines.

On this day, the 32-year-old is being fitted by a master tailor from Ermenegildo Zegna, which created a midnight blue made-to-measure three-piece suit for him to wear to the Metropolitan Museum of Art gala. Upon entering his office at “The Daily Show” studios with its exposed brick walls, leather chairs and memorabilia cases, he immediately turns on four television sets tuned to different channels — potential material for that night’s show — as well as a stereo that plays soft blues tunes in the background.

The “functional, gritty” office includes a workout machine that he can jump onto and do some upper or lower body resistance work when he gets a free minute or two. Hopefully by the end of the day, those stolen moments will add to 30 or 40 minutes of working out since Noah is too busy to make it to a traditional gym.

Free time is a luxury Noah doesn’t have much of these days. In addition to “The Daily Show,” the comedian still keeps up a jam-packed schedule of stand-up shows around the U.S. and internationally, is writing a book and has a live-in girlfriend, the model Jordyn Taylor.

Although his time for the fitting is limited, Noah is gracious, funny and endearing as he tries on the ensemble with both a navy and a white shirt, a blue or black formal tie and two different pocket squares.

While his final choice was still up in the air, Noah was leaning toward the navy shirt and tie. “It’s more dramatic,” he said.

And it’s different from what he wears on television everyday.

For “The Daily Show,” he has a contract with Tiger of Sweden, which outfits him in his wardrobe of choice — suits. But he’d been exposed to the Zegna brand during a visit to the company’s store in Dubai and the relationship blossomed from there.

“I don’t commonly wear a three-piece,” he said. “I’m used to wearing a suit more casually. I’ll wear them with sneakers. When you wear a three-piece and you say, ‘Oh this? I just threw it on,’ people know you didn’t.”

He said growing up in South Africa, he always wore a suit as a uniform to school, hence the love affair. “I grew up wearing suits and I’m comfortable in them,” he said. “I actually find it liberating. When you grow up poor, you don’t have a lot of options when it comes to clothing, and wearing a uniform was the equalizer. You could never spot the poor kid or the rich kid — we were all the same.”

And at the Met Gala, “We’ll all be equal again — Zegna put me on an equal level,” he said. But inspecting the custom Trevor Noah label on the inside of the jacket, he added: “This destroys the re-gifting options.” Although Zegna doesn’t have a table at the gala, it will be in attendance since it is dressing several other male celebrities including Paul Rudd, Nikolaj Coster-Waldau and Future.

Even though Noah admitted he doesn’t know much about fashion, he joked: “I like clothes. I think they’re a good invention. Things get interesting without clothes.”

And he admits to having Champagne taste when it comes to his wardrobe.

“I have two weaknesses,” he said. “First, I have expensive taste without knowing it. If you put a row of T-shirts in front of me, I pick the $80 one. It’s a curse.”

The second? “Women’s shoes,” he said. Although that might raise an eyebrow or two, Noah said it stems from growing up with a single mom who “loved shoes but couldn’t afford them. So we went to yard sales and church sales and she was very good at picking the good shoes. I learned from her. I can pick a women’s shoe quicker than a man’s shoe.”

Now that he’s hit the big time, does Noah ply his mom with Christian Louboutins? “No, she has too many shoes now,” he said. “And besides, she always said if you buy shoes for a woman, she’ll use them to walk away.”

Stories such as these will undoubtedly be part of Noah’s book, due out in November. He described it as a “collection of stories about growing up in South Africa” that will include some “fun anecdotes and some painful stories — the pieces of my life that have built the foundation for who I am today.”

When he’s not jotting down memories, he continues to charge ahead with his “Daily Show” hosting duties and his stand-up routine.

“Stand-up is not a job for me, it’s taking time off. It’s a great way to see America.” He said that until he started traveling the country with his comedy show, he didn’t realize the nuances of all the different cities and towns. “Stand-up is great for that, you travel and meet people and you get to eat in different places. In some places, they just refuse to eat healthy, but that just adds to the texture.”

Noah tries to lead a healthy life but that doesn’t help solve his most vexing problem. “I have a big ass,” he said, “and it doesn’t correlate with the shape of the rest of my body. But where God cursed me with a big ass, he blessed me as a sample size on top. And then this face…” he said, admiring himself in a full-length mirror before laughing.

But Noah is more than just a handsome face. Although his chosen field is comedy, his childhood experiences in apartheid South Africa make him a complex character.

“My life has been funny, yes, but there’s a lot of funny in pain,” he said. “And my life hasn’t always been a joke — but I still find ways to laugh.”