The shops in Covent Garden and Westfield London will debut on Nov. 5.

The SoHo store in New York was the first physical Untuckit location.

Untuckit is taking its message across the pond.

The brand that got its start selling shirts to men that are designed not to be tucked into pants will open its first two stores outside the U.S. this fall.

Two units, in Covent Garden and Westfield London, will debut on Nov. 5. They will both measure around 1,600 square feet and will carry the full selection of the brand’s men’s apparel. The retail openings will be supported by the launch of a U.K.-specific web site.

The company was created by Chris Riccobono, who convinced his Columbia University business school classmate Aaron Sanandres to develop a business to address the issue that they couldn’t find a casual shirt that fit correctly when untucked. So they launched a direct-to-consumer web site with $150,000 in seed money from friends and family in 2011 and sold shirts that were shorter with a contoured hemline in a wide variety of fits. The brand was successful out of the box and by 2016 “put $8 million on the books,” Riccobono said. 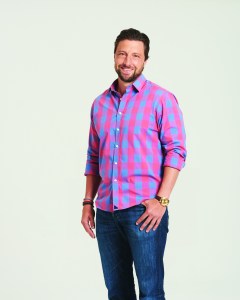 The first Untuckit store opened in New York’s SoHo in 2015 and today, the company has 75 stores in North America; it opened its first international store in Toronto last September.

“Canada was our first international move because logically it made sense,” Riccobono said.

Then, seeing that purchasers from English accounted for a chunk of the brand’s sales, it wasn’t long before they decided to take the plunge to Europe.

That, coupled with the fact that the U.K. is one of the closest countries to the U.S. and “they speak English, which is a lot easier,” sealed the deal, Riccobono said. “On top of that, we did focus groups and realized the problem we were solving was also an issue in England. Most shirts are too long.”

Riccobono said the goal is for international sales to eventually account for 50 percent of Untuckit’s business. “That’s always been in the blueprint,” he said, adding that over the next 18 months the company would like to expand into Ireland, Germany, Amsterdam, Mexico and Dubai, among other areas.

As to why Untuckit is now eyeing expansion internationally rather than domestically, Riccobono said the plan was always to end up with 85 to 90 stores in the U.S. “We never wanted 200 stores. We still think of ourselves as an e-commerce company. Our brick-and-mortar stores are for people who don’t want to shop online and still like to touch and feel the product.”

He called it a “convenient omnichannel shopping” strategy.

Untuckit now offers a range of categories for men including polos, sweaters, sweatshirts, pants, shorts, sport coats and outerwear. It also carries women’s shirts and dresses and has a collection of shirts with different leagues within Major League Baseball.