Parent company Aeffe is turning its attention to the men’s side of the quirky label helmed by Jeremy Scott. 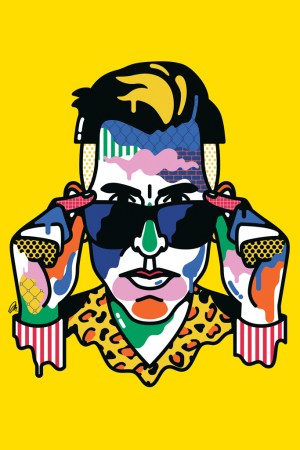 Social media will no doubt help create buzz and spread the news, but Pitti Uomo is calling attention to the rejuvenation of the Moschino brand under creative director Jeremy Scott the old-fashioned way — with a runway show on June 18 in Florence.

After presenting his first two men’s collections for the brand in London, Scott makes his men’s wear debut in Italy with Moschino as the men’s wear guest brand at the international trade show.

Scott has successfully tapped into the quirky and ironic vein so ingrained in the brand by the label’s founder, the late Franco Moschino, but has added a contemporary spin to the tongue-in-cheek looks that shaped the brand’s legacy by tapping into today’s pop iconography.

Massimo Ferretti, president of Moschino’s parent company Aeffe SpA, latched onto Scott’s potential and vision for the brand, hiring the designer in October 2013 to succeed Rossella Jardini. Speaking to WWD shortly after revealing that Aeffe will also produce and distribute the Jeremy Scott collections, Ferretti said the deal underscored the company’s “solid and good relationship” with the designer.

Asked if he had expected such a turnaround at Moschino, Ferretti said when he first met Scott, he realized he was “the right person” for the label. “His project for the brand fully persuaded me and I knew he would correctly read the brand. I had positive expectations, but the brand performed even better than forecast.”

Moschino’s performance since Scott’s arrival helped lift profitability at the publicly listed fashion group last year, when Aeffe swung back to black. In the first quarter of 2015, earnings rose 46.9 percent to 5.2 million euros, or $5.8 million at average exchange, on sales that climbed 5.3 percent to 71.2 million euros, or $80.4 million.

Ferretti admitted Scott’s social networking skills and connections have contributed to the brand’s success, but at the same time highlighted the designer’s sensibility for art and music and his ability to speak to a younger generation with “a readily understandable and immediate language.” The entrepreneur said this ability to communicate is in sync with Franco Moschino, but “in a new way, with today’s tools, yet not dissimilar from Franco’s.” He touted Scott’s ability “to express what he’s doing with the collections.” Of Scott’s relationship with celebrities, ranging from Rihanna and Katy Perry to Miley Cyrus, Ferretti characterized it as “rapports of real friendship.”

Pitti’s invitation was “especially welcome and appreciated,” he said, because it coincides with Aeffe’s decision to take the production of Moschino’s men’s wear in-house. It also marks how the group views the category as “an important future driver of growth. There is an increasingly bigger emphasis on men’s wear.”

To wit, new boutiques in Los Angeles and Milan, which opened on June 8, and an upcoming unit in New York are meant to carry the men’s collections.

“It’s a way of thinking. The goal used to be women’s but men’s is now equally important,” Ferretti said. “Of course, men won’t be turning to us for a pin-striped suit.”

Ferretti also believes men’s wear has strong growth prospects internationally. “It’s an alternative that goes beyond the traditional guidelines and can open a new and larger market.” Cases in point: For fall, Scott for Moschino showcased spiked plaid checks, shearling and fur with shiny plastic or shimmering sequins, and showed a tux in silver, printed with garish orange hibiscus flowers.

The designer is no doubt inspired by his surroundings. Scott continues to live and work out of Los Angeles, although he spends weeks in Milan and at Aeffe’s manufacturing plant in San Giovanni in Marignano, near the beach town of Italy’s Cattolica, on the Adriatic Sea.

Ferretti said: “Jeremy is fulfilled, he works hard and loves his job.”