At South Africa Menswear Week, standouts included talents from across the continent. 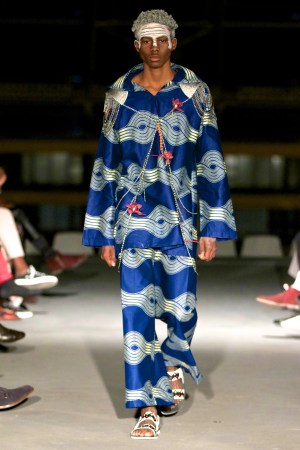 South African Menswear Week may be a relatively new event, but the biannual platform has already energized the African men’s wear scene.

More than 55 designers showed their spring 2017 collections over four days in Cape Town. Among the standouts this season were talents from across the continent, including Chu Suwannapha of Chulaap, Craig Jacobs of Fundudzi Men by Craig Jacobs (FMBCJ), Lukhanyo Mdingi and Rich Mnisi, along with Nigerian designers Adebayo Oke-Lawal of Orange Culture and Tokyo James.

African prints, as always, made a strong showing, particularly rich and vibrant hues of blue, orange and green. The Thai-born, Paris-trained and Cape Town-based Suwannapha once again demonstrated his mastery of tribal prints, layering them on top of each other in tailored, but relaxed silhouettes, in a widely praised collection he called “African Surfers.” Adding a new layer of interest, and an evolution for the Chulaap label, were pixilated portraits of faces, crocodiles and other fauna, specially created by British illustrator Camilla Perkins.

“Chu never disappoints,” remarked Sinqobile Ntombela, a buyer for the South African mass-market fast-fashion chain Mr. Price. “He has found his market and ensures that he evolves his ranges.”

Another standout, Orange Culture, featured prints that were more playful than tribal, in a collection designer Oke-Lawal described as “School of Rejects.” He and fellow Nigerian Tokyo James sent out, according to Ntombela, “amazing ranges and raised the bar in terms of direction and execution.”

Where Orange Culture was exuberant and playful, even toying with ideas of femininity in men’s wear in terms of styling and silhouettes. Oke-Lawal, for instance, showed a shorts and jacket suit ensemble in pink and white pinstripes that looked conventional from the front but revealed a peekaboo laced-up back, while James’ collection, “Circle of Life,” was more sober and restrained, inspired by “an old woman from the streets of Lagos who was selling peanuts and she was wearing her husband’s suit, she looked so amazing and happy doing what she was doing and very stylish.” The defining feature of James’ collection was the yoked harnesses over the torso, a nod to the designer’s relationship “to the industry and the fear of the old, as well as the fear of change.”

While male designers have dominated women’s fashion, female designers have been spicing up African men’s wear. Jenevieve Lyons’ collection, “Deferential,” was a play on, among other things, “the ugly” and “gender fluidity” as well as “layers, cutouts, ease of movement played against constraint within belted proportions and tasseled adornments.” Gender fluidity was also present in Alexandra Blanc’s collection “In Blanc We Trust,” which she explained “continues to liquefy boundaries and turn social constructs upside-down, inspiring the individual to trust in their own beauty.” The brand’s core philosophy, she said, rested on “men’s wear flowing into women’s wear with no rigid divide between the two.” The collection featured graphic prints of monochromatic iconographic imagery rendered in pixilated prism colors of the digital age.

The emergence of SAMW as a men’s wear platform reflects the evolution of the African man. Katlego Molaolwa, brand manager for men’s wear at national department store chain Woolworths, believes that “South African men have become more fashionable consumers over the past few years and have taken a greater interest in their overall appearance, as well as in the latest trends and styles.”

Said Ntombela, “The South African male has always been fashionable but with a laid-back approach; the only difference now is that due to the exposure to international markets, web sites, trends, etc., he has become more daring, more diverse and accepting of change.”

As for the African man in general, Karim noted that he has always had “a sense of proud style, definitely becoming more fashionable and aware of global trends. However, I believe that the globe looks to the African man for what’s cool.”

Despite the strength of SAMW, the nascent men’s wear retail industry in Africa continues to face challenges. “Unfortunately, there aren’t enough retailers, and by that I mean independent concept stores that cater for local South African contemporary labels,” lamented Mdingi, who for the moment sells his line in only one outlet, the AKJP Collective concept store in Cape Town. “This makes it difficult for those that want the opportunity to expand their products and labels across our country, because the outlets are not available.”

For Lyons, her brand “is faced with finding a suitable retail space that reaches our clientele and niche market in a manner that would be feasible for our business to invest in a rail rental fee and the production costs behind a consignment retail line.”

Finding a physical retail space overseas is doubly challenging. “Thus far,” she continued, “online retail in the European market has been a friendly option; physical retail overseas requires complicated documentation that we as a young growing business is still obtaining, namely an export certificate, tax documentation and so forth.” Lyons sells online in Europe via stylefly.co.uk.

Molaolwa noted that online works because of the natural male instinct of “wanting convenience. He is starting to rely more on using digital platforms to make his purchases because it saves him time in terms of travel time and roaming shops, better and easier mechanisms to compare prices and options and there are no queues. The only thing that might make him go into a store is the inability to try out product and payment insecurity.”

While Suwannapha retails in New York and London via oxosi.com, and locally in Cape Town emporium Merchants on Long, he has chosen stores “that will work for me because of my full-time job as a fashion director. Also I don’t carry stock. You order and I will deliver.”

Orange Culture, on the other hand, boasts “quite a vast customer base,” according to Oke-Lawal. “We deliver to customers from Australia to even Croatia. We are also talking to a few stores in Europe and in America, so fingers crossed by the end of the year we will have a new list of stockists in London, New York and Eastern Africa.”

He admitted, however, that “a lot of stores run away from stocking African brands — so building the confidence in your made in Nigeria brand even when they love the pieces is one of the hardest hurdles to face.”

Within Nigeria, Orange Culture is available in select boutiques such as Alara Lagos, Grey Velvet and Stranger Lagos. “Generally within Nigeria we don’t have a lot of retail avenues that suit the brand’s aesthetic, so the few we are in work for the pieces we’ve decided to stock with.”

The retail industry is only just emerging in Tanzania, said Karim. The local industry to date has been focused on bespoke tailoring; “the daywear market is still bought from overseas.” The challenge is to “create and make a good casual garment industry, so that it will be more attractive to buy locally rather than overseas.” But he acknowledged that this brings up another issue. “This is about fabrics and production. Unfortunately, both of those are limited in Tanzania. Hence it is cheaper and better made overseas, sadly.”

“To get the fabrication right is a huge problem in South Africa,” said Suwannapha. For Blanc, there is the competition with international fast-fashion conglomerates, as they offer cheap labor and mass production. “We want to make our product accessible to our target market of young creative professionals, so we are staying away from the high-end luxury market. So the middle ground is the most difficult, which is why we are working even harder to create clothing that is unique in design and high in value to our customer.”

James faces the same challenges in Nigeria in terms of production, as well as cost issues. “Just keeping the lights on in the factory is a problem.” The other issue is respect, of being seen by fellow Nigerians as “just African designers and not giving us the same respect as our peers in Europe.”