The designer is restructuring its staff and seeking locations for additional retail stores.

Bode is making some significant changes in its business to support the brand’s growth. Last week, the company let go of four employees and Jack Miner, who had overseen operations and finance, exited to explore more creative opportunities, according to Bode founder and designer Emily Bode.

She said the company will be hiring more seasoned production and management staff with expertise in operations as well as domestic and international manufacturing. Bringing a chief executive officer on board is also in the cards. Bode said most of the staff up until this point had been recent college graduates, but the plan is to add people with five-plus years of experience.

The men’s designer brand created by Emily Bode three-and-a-half years ago has quickly become a darling of the fashion industry with its heritage-inspired collection that uses heirloom fabrics and vintage manufacturing techniques. 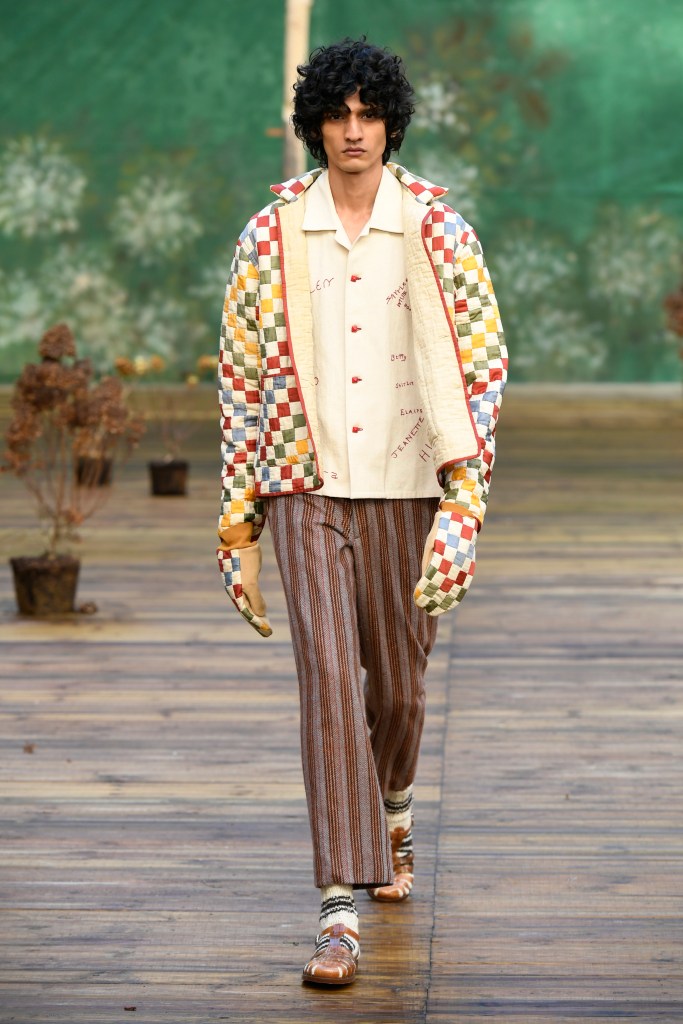 Earlier this month, Bode snagged the inaugural Karl Lagerfeld Award for Innovation at the International Woolmark awards and will be awarded 100,000 Australian dollars, or about $66,000 at current exchange, and the opportunity to sell globally at high-end department stores including Harvey Nichols, Lane Crawford, Hudson’s Bay as well as online.

That’s just the latest honor she received. Bode was the first female designer to show at New York Fashion Week: Men’s and was the runner-up for the CFDA/Vogue Fashion Fund Award. She was honored with the Emerging Designer of the Year Award at the CFDA Awards at the Brooklyn Museum last year and was shortlisted for the LVMH Prize, one of the biggest awards in fashion for a young designer.

Although those accolades have helped raise her profile, it was the opening of her first retail store, an 800-square-foot space on Hester Street near her offices in New York’s Chinatown, that was really the game-changer.

Bode said the retail store has “changed our entire business.” Not only does it give customers a place to “experience the brand, like our presentations used to,” but it is also drawing shoppers on a weekly basis. “We have customers come in when they visit New York and it’s also become a destination for tourists and repeat customers,” she said.

She said that in order to serve these repeat visitors, the brand has increased the design and production of one-of-a-kind pieces that can be sold in the store, and she has brought in more in-house design talent to help create these pieces in her New York studio.

The brand’s e-commerce site has also been revamped and will launch next month.

What all this points to is more of a focus on direct-to-consumer sales and less on wholesale. Bode said over the past couple of years, outside issues such as retail bankruptcies and closures — Barneys New York and Opening Ceremony, for example — and worldwide disasters such as the coronavirus have led to a drop in wholesale volume.

“So as not to take a hit, we have to invest in our own retail,” she said. That also allows the brand to better control its own destiny. So instead of seeking out investors or factors to help the Bode brand expand, she said, “we can now grow organically.”

The plan includes adding stores in markets where the brand performs well, notably Los Angeles and London. Although she said the company is “actively looking” for space, there is no definite timetable for when additional retail units would open. Ditto for the addition of a ceo.

Next week, Bode and Microsoft will host an event at the New York store to celebrate the creation of the Bode Vault, an archive of the designer’s extensive antique textiles. Microsoft used its AI technology to create a design-to-production platform that draws from history’s most comprehensive library of textiles to recognize and categorize the fabrics. The event on March 3 will include a presentation from the textile curator at the Brooklyn Museum.

Emily Adams Bode was born and raised in Atlanta. She studied in Switzerland before moving to New York to attend Parsons School of Design and the Eugene Lang College where she graduated with a dual degree in men’s wear and philosophy. Her designs use vintage textiles she has been collecting since childhood reworked into modern silhouettes using quilting, mending and appliqués. In addition to her own store, the collection is carried in Moda Operandi Man, Brown’s, Matches, Goodman’s, Totokaelo, Neighbour and Tomorrowland.