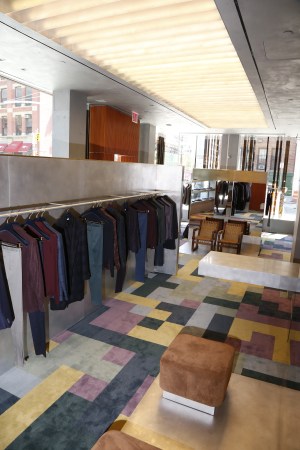 The shop, whose entrance is on Lafayette Street, is on the ground floor of a new building designed by Annabelle Selldorf of Selldorf Architects that includes 11 luxury residences. It had a soft opening over the weekend.

The men’s and women’s brand, which is based in Milan, opened its first retail shop in its hometown on Via San Pietro all’Orto in June of 2014. It also operates franchised units in Tokyo and Seoul, according to Giovanni Mannucci, president and chief executive officer.

While the New York location might seem a bit unconventional for a luxury brand, Mannucci said the choice was well thought out. “We’re a global niche brand and want to stay connected to people on a local level,” he said.

Rather than enter the fray on Fifth or Madison Avenues, where it would “be hard to be noticed,” he added, this up-and-coming neighborhood “makes sense from an economic point of view. This is a very cool location with a lot of other stores, restaurants and residential buildings. We felt it would be a good fit for us and will get us noticed by New Yorkers.”

He continued, “We’re a small brand and if we’re going to open near the big luxury brands, it says you’re one of the guys, but it’s also extremely expensive and will keep us from making investments in other things.”

He said the goal is to effectively communicate the brand’s message and continue to build its business. In 2013, Wise SGR, an Italian private equity fund, purchased the remaining stake in the brand from the Boglioli family. Wise had acquired 70 percent of Boglioli in 2007. In 2012, the brand had sales of $37 million. That number has increased to $40 million now, he said.

Mannucci said he’s expecting the New York store to do well, but if it doesn’t, the investment is such that it won’t break the bank. “It’s a safe place to be and a great test for us.”

The Bond Street store was designed by the Milanese design team of Emiliano Salci and Britt Moran of Dimore Studio, who also designed the Milan store. It features a modern, understated look that puts the focus on the clothes. Sportswear is merchandised inside the front windows, while the knitwear, tailored clothing, furnishings and outerwear are interspersed throughout.

The Boglioli women’s collection will be added in the fall, the company said, and will be merchandised separate from the men’s, which represents the bulk of the brand’s sales. “It’s small,” he said, “but in the future it will be bigger.”

Mannucci revealed that as part of its retail expansion, Boglioli will open a second American store in Miami in November.

In New York, the brand is also carried at retailers such as Barneys New York, Bergdorf Goodman and Saks Fifth Avenue, and Mannucci doesn’t expect the business there to suffer as a result of the brand’s freestanding store openings.

“New York is a big city,” he said, “and clearly there is room. We’re not too close to their stores, so it won’t interfere with their business.”

In his mind, “growing a brand means a mix of channels,” he continued, noting that Boglioli also has a strong e-commerce business.

“We’re looking to grow the business in the U.S.,” he said, noting that America currently represents around 20 percent of the company’s sales. “The economic structure of the U.S. is stronger than anywhere else around the globe and will grow faster than other countries,” he said. “After two seasons of not-too-great results, I believe we will see a comeback after the election.”

Boglioli has been on a growth trajectory in the past couple of years. It hired its first creative director, Davide Marello, in November, and held its first runway show in Milan in January. Mannucci joined the company in 2013.