Brands to Watch at Pitti Uomo

Labels to check out at the Florentine trade show.

Ben Sherman is hoping to expand its reach in Europe.

After posting sales gains of 10 percent for the last three years, the British men’s wear brand will bring its core and Archive capsule collection to Pitti Uomo as it simultaneously moves to expand its reach into Italy and Spain.

Ben Sherman, which is owned by the U.S.-based Marquee Brands, recently signed distribution deals for those countries, which are expected to “make these two regions key to the fulfillment of our global strategy,” the company said. The expanded European presence will include wholesale, and e-commerce distribution for Ben Sherman in those regions, along with the development of mono-branded retail stores over the next three years.

Beyond the distribution deal, the company is hoping other retailers will also sign on to carry the brand, hence the return to Pitti.

This is not Ben Sherman’s first time at the trade show — last season the brand returned to Pitti after a five-year absence and created an exhibition titled “The Decades,” which celebrated its five decades of shirt-making.

This time, Ben Sherman has taken an 861-square-foot space and will create a “selling environment” that will “transport people into the Ben Sherman world,” according to Talbot Logan, senior vice president of brand management. The booth will use old subway tiles from the London underground and vintage seats from the Sixties to create the mood.

The booth will serve as a backdrop for the spring collection, which is inspired by Abbey Road and other music from the Sixties. Think candy-stripe colors on washed sweatshirts and lightweight sweaters, color-blocked polos and Mod-inspired sport shirts. There are also classic waxed Harrington jackets with a plaid interior, relaxed canvas trousers, chino shorts and red and black plaid pants. The spring line marks the return of the brand’s signature logo branding after a seven-year hiatus and it’s found on flocked sweatshirts and striped rugby shirts. 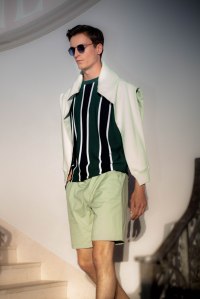 A look from Ben Sherman.

The elevated Archive collection, whose design is based on modernized version of the foundations of the British brand, has expanded from a small assortment of button-down oxford shirts and polos into knitwear and outerwear as well for the spring season. Key pieces will include a check shirt in red tartan and an antique gold Harrington jacket. — JEAN E. PALMIERI

Italian hip sneaker label P448 is making its official debut at Pitti Uomo with a booth at the Urban Panorama section and designed by the Milan-based Piuarch Studio, the architecture studio behind the Gucci Hub.

The brand, which was founded in 2014 by Marco Samorè and Andrea Curti, features among its investors footwear veteran Wayne Kulkin’s StreetTrend that in July 2018 joint ventured with Italian investment firm Panda Srl to purchase the design, manufacturing operations and brand assets of the label. The cofounders retained a 35 percent interest.

Along with presenting its offering of signature sneakers, which combine the use of unique color combinations and premium materials with a cool fresh street sensibility, P448 will unveil a sustainable capsule, including four unisex lightweight and highly resistant styles crafted from natural recycled leather. With this project, the brand aims to significantly reduce the environmental footprint associated with leather production, as well as the quantities of energy, chemicals and water used to manufacture its shoes.

In the more traditional line, P448 will present new versions of its Soho style, where the eye-catching sole enriched with a marble-like effect is combined with uppers in different color combinations, such as off-white matched with forest green, red and navy blue.

In addition, the low-top John will be displayed in gray leather treated to obtain a snake-like texture, as well as in black cracked leather with a tone-on-tone suede toe and neon details. 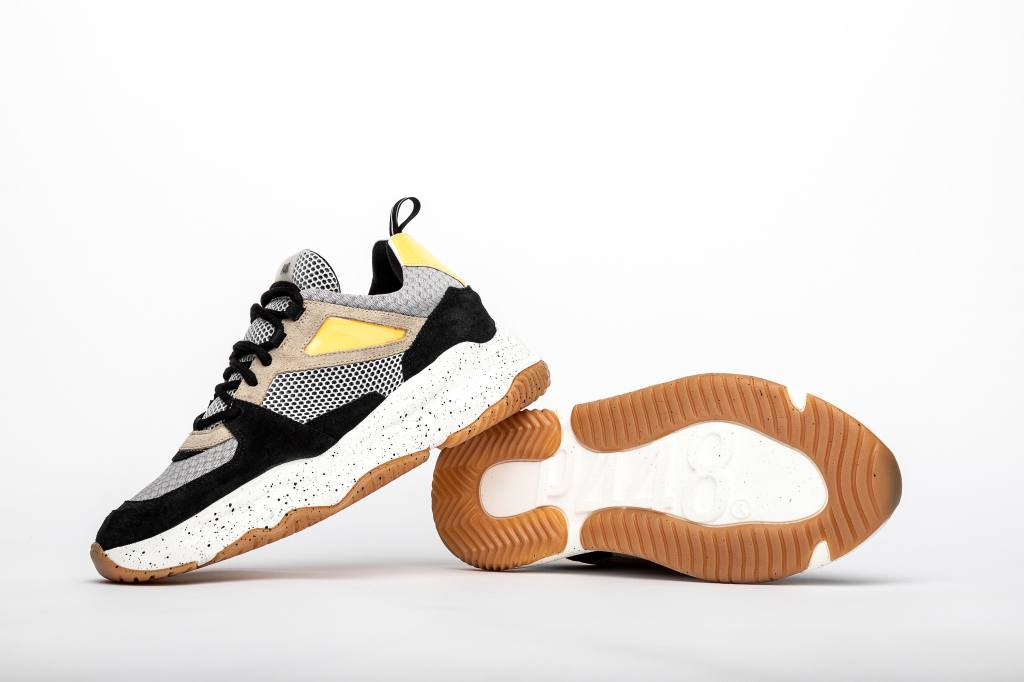 Chief executive officer Paolo Griffo said the brand will open its first flagship this year in New York’s SoHo district. According to the company, which recently operated pop-up shops in London at Selfridges and in Milan and Rome at Rinascente, P448 next year will unveil a boutique on Milan’s Via Montenapoleone.

In addition, from the second half of the year, the company will enter new markets through exclusive partnerships in Russia, Eastern Europe, Scandinavia, the Middle East, Korea and Japan.

With prices ranging from 180 euros to 300 euros, P448 sneakers are available in 800 doors, mainly in Italy, Europe and the U.S., including  La Rinascente, Harrods, Selfridges, Liberty, Printemps, Nordstrom, Bloomingdale’s and Neiman Marcus. Last year, P448 expanded its reach, rolling out in Beymen in Turkey; Harvey Nichols and Bloomingdale’s in UAE; Gran Via in Mexico; Davids in Canada, and Lane Crawford in China, as well as select sales points in Hong Kong, Singapore and Japan.

Twelve years after its official launch, the Turin-based trouser specialist brand formerly known as PT Pantaloni Torino is ready to unveil the results of its re-branding effort.

With the help of Roman art director Riccardo Ruini, who previously worked for luxury labels including Gucci, Valentino and Bulgari, the label changed its name to PT Torino and unveiled a more modern and fresher logo, where the combination of dark brown and silver was switched with a graphic match of black and white.

“The decision to change the name of the brand was mainly guided by two reasons,” said Edoardo Fassino, chief executive officer of PT Torino’s parent company Cover 50. “I think that after a decade in the business, people know that we make pants and eliminating the world ‘pantaloni’ [pants in Italian] will give us the chance to explore new product categories in the future.”

He said the way people wear pants has changed significantly in the past several years. “In the past, there were just a few types of pants, and now there is an explosion of different styles and to stay competitive in the market we have to offer a wide range of options in a way which is coherent and very precise.”

To reach this goal, PT Torino will bring to Florence a collection organized in capsules using a range of silhouettes and materials and  targeted to different customers.

For example, the lineup will include the Reworked capsule, including five workwear-inspired designs crafted from white cotton canvas and linen, defined by clean, modern silhouettes; the Active selection offers trousers crafted from high-performance materials; Vintage features styles with special lived-in effects, and Won Out has revamped chinos enriched with street-art graphics. 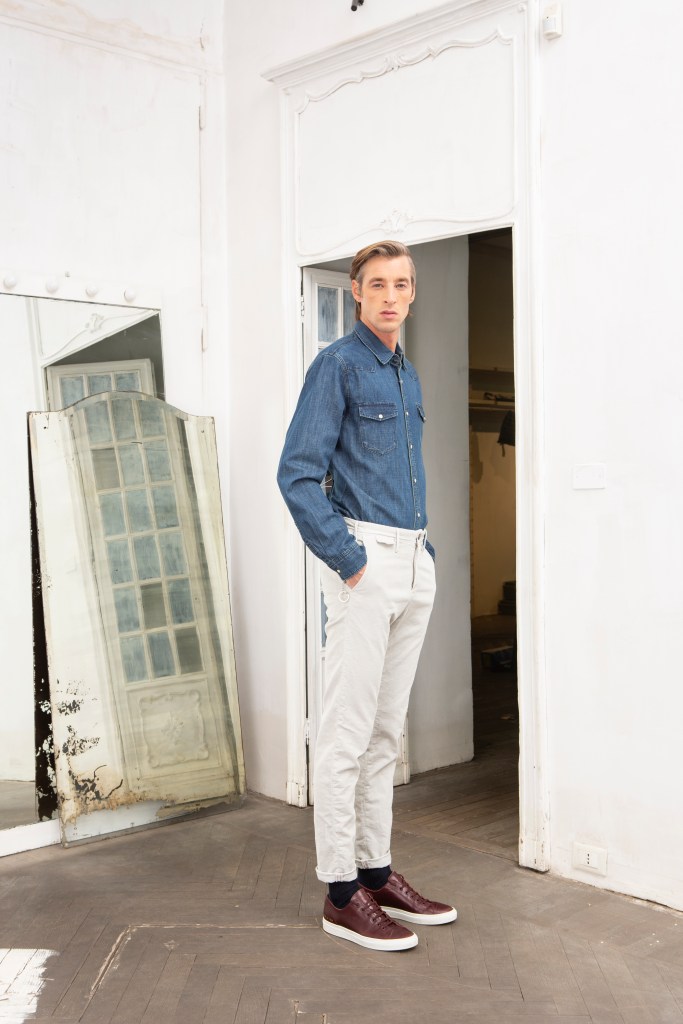 A look from PT Torino for spring 2020.  Courtesy Photo

Italy accounts for 40 percent of the company’s total business, while Japan and the United States, where the brand opened a subsidiary in 2015, account for 20 percent and 10 percent of PT Torino’s sales, respectively.

The company, which sells its collections in about 1,200 stores in the world, including Saks Fifth Avenue and Barneys New York in the United States, aims to further expand its international presence.

“The first target is China, even if it’s hard since there isn’t a structured wholesale business there,” said Fassino, who said expanding women’s wear and denim might be in its future.

Founded in California in 1958 by Stuart Levin, who invented the brand’s signature logo with a sun rising above the deck, Sundek took advantage in the Sixties of the rise of the U.S. surf culture and, in the Seventies, its colorful, comfortable, durable and fast drying two-ply nylon taffeta board shorts, featuring rainbow stripes, became key to its success.

While the brand first proliferated in the States and Hawaii, a profitable license in Italy opened the path, starting from the Nineties, to the brand’s success in the Italian market. The company is currently controlled by Italian investment fund Style Capital, which invested in the brand 10 years ago.

Sundek, which has now expanded to activewear as well, is debuting a new line at Pitti Uomo called Goldenwave.

“This is our premium project, which celebrates the golden age of the brand, when in the Seventies the Californian and Japanese cultures converged in Hawaii,” said Sundek co-chief executive officer Tommaso Andorlini.

The collection, which retails from 150 euros to 250 euros, includes high-end board shorts featuring the rainbow stripes in classic matte or reflective sheen; loose shirts and Bermuda shorts crafted from precious printed fabrics created on antique looms by Japanese textile company Hokko, and T-shirts and hoodies in a luxurious jersey by Osaka’s fabric manufacturer Toki.

The men’s line accounts for 70 percent of Sundek total business; however, the brand is working to grow its women’s division, which accounts for 8 percent.

“We look for a slow, organic growth in the women’s business, especially in the activewear segment,” said Andorlini. The company also operates a children’s line, representing 12 percent of Sundek total business, while accessories account for 10 percent. 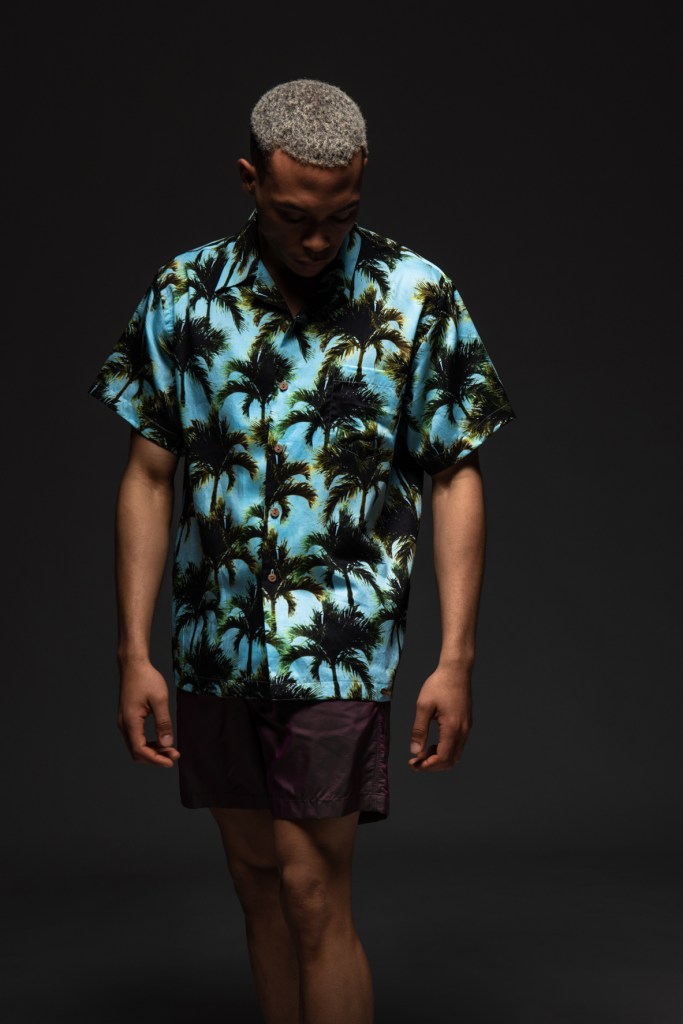 According to Sundek co-ceo Alberto Giganti, in 2018 the company posted revenues of 24 million euros, up 13 percent compared to the previous year, while generated earnings before interest taxes depreciation and amortization of 5.3 million euros. They are expected to reach 5.9 million euros in 2019.

The company operates 16 directly controlled flagships, including the recently opened units in Taormina, Cannes and Barcelona, as well as 16 franchised shops.

“We kicked off the retail expansion from the most important seaside destinations, we have recently opened in Miami and Guadalajara; the next step is entering major international cities, such as New York, Los Angeles, Tokyo and Sidney,” Giganti said.

In keeping with the natural evolution of a private equity’s strategy, Style Capital after 10 years is gearing up to exit the company.

“We are very proud of what we achieved with Sundek,” said Style Capital investment director Roberto Gattoni. “When we made our investment, Italy accounted for 97 percent of the company’s total business and now the percentage decreased to 70 percent thanks to an expansion in the international markets. The company was only wholesale, their business was profitable but not in line with the evolution of the market, so we successfully developed a retail strategy.” — A.T.