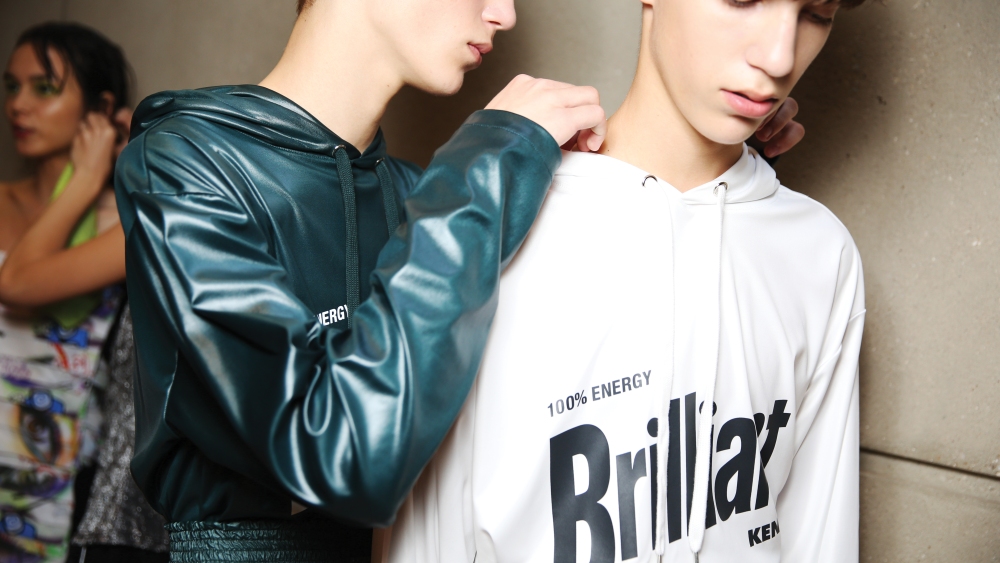 But since being named creative directors by Kenzo’s owner, LVMH Moët Hennessy Louis Vuitton, in 2011, they have embraced the brand’s storied history and moved it forward to attract an entirely new generation.

The spring men’s show received high praise for its collection of baggy pants, voluminous tops, short shorts and high socks that would have looked right at home at the Tunnel or Limelight nightclubs in the Nineties.

But while the season was clearly inspired by the street, it didn’t lose its connection to the brand’s history with details such as oversize eyelets and an updated long-lashed version of the label’s eye motif worked into the looks.

The ability to seamlessly blend old and new has become a hallmark of the label since the duo took the reins. But in the beginning, the pairing of two young American retailers and a Paris-based luxury label was unconventional and raised more than a few eyebrows.

The duo, who had made a major splash in the fashion industry in 2002 as the founders of Opening Ceremony, a store popular with hipsters and celebrities for its out-of-the-box collaborations and emerging designer discoveries, was determined to get the job.

When Leon and Lim heard LVMH was looking for a creative director for Kenzo, they contacted the company and were told that a selection was imminent. Not to be deterred, they decided to throw their hats into the ring.

“Carol and I had a one-day turnaround,” Leon recalled. “So we designed a collection of clothing and shoes, made a video and flew to Paris.”

When showing their ideas to the LVMH brass, they were stopped halfway through and told they were hired. “But wait,” he recalled saying, “you haven’t seen the whole thing.”

Not necessary. The self-professed mall rats from California had nailed it.

Leon said that while they had become known for their buzzy “collaborations and thinking out-of-the-box, we always said we wanted to sink our teeth into something and turn it into a business. But we never had the opportunity.”

Under LVMH, which had purchased the label in 1993, Kenzo was stagnating. “It hadn’t been touched,” Leon said. “But Carol and I had revered it since our college days when we bought pieces in vintage shops.”

They knew full well that they “didn’t invent the brand — it has a founder who did something amazing for Asians and Europeans and created a global community. Kenzo comes to almost every show and says that he sees we haven’t forgotten what he’s done. We feel we’ve been passed the baton.”

In the years since, the duo has sought to “bring the energy and enthusiasm back.”

Six years ago, Leon said, Kenzo was 90 percent sold in France and was predominantly men’s suits. “Now it’s a global brand and both genders are equally strong — 50-50 — in ready-to-wear.”

“When we began, there were no bags or shoes,” he said.

Moving the rtw forward was also a goal, but it wasn’t without its challenges. “It was a big feat,” Leon said. “Six years ago, we introduced a sweatshirt on the runway. And we heard, ‘This is Paris, we don’t show sweatshirts.’” But the product was a hit and the naysayers were silenced.

“Carol and I always use our guts and we’re really storytellers,” Leon said. “So each collection has an in-depth story.”

For men, that story is still rooted in clothing, which remains a hallmark of the brand, but Lim and Leon’s suits have been modernized. Men today wear suits differently and Leon said Kenzo is no longer selling nested suits, but offering separates to “let the customers make their own suits.” “There’s a whole new element to the way people shop,” Lim added. “There are no structured rules.”

“We decided to give everything a fresh spin,” he continued. “We were given a platform to reinvent the entire [brand].”

The duo said that while LVMH was open to a refresh, they still had to prove themselves. “But they saw we were fighters and wanted to change the brand and give it relevance.”

The runway collection is just the beginning for them. “We don’t stop until it’s out of the stores and in the customers’ hands,” Leon said. “We’re very involved in sales and the commercial aspect.”

And while LVMH does not break out sales for its individual divisions, the fact that Lim and Leon remain in their roles speaks volumes.

“In every re-branding, there’s always a point where business dips,” Leon said. “But we’ve never had that. The Kenzo customers were loyal and we’ve recaptured them while bringing in new customers. We’ve probably brought the average age down by 20 years.”

Even so, there’s plenty left to do.

“We feel we’re just scratching the surface,” Lim said. “We haven’t even touched retail.” “Which is crazy because that’s our background,” Leon interjected. Kenzo has more than 200 stores around the world, both company owned and through partnerships.

“And there are other categories we’re excited to introduce,” Lim said. “The heart and soul of the brand is ready-to-wear, but at one point it was also doing furniture, home goods, restaurants, hotels.”

“It’s a lifestyle brand and we think the sky’s the limit,” Leon added.

But how do they juggle their Kenzo duties with Opening Ceremony and their personal lives — both have two small children.

“It’s organization,” Lim said, “and there are two of us so we split the focus.”

There are Opening Ceremony stores in New York and Los Angeles as well as six stores in Japan through a partnership with Onward Kashiyama.

And in 2014, the duo took on a minority partner, the Boston-based private equity firm Berkshire Partners to help them fuel their growth.

“We never had a board, but they came with a wealth of expertise,” Lim said. “They let us lead the brand and they’re very supportive. They’re the best partners.”

With Berkshire’s support, Leon and Lim are concentrating on Opening Ceremony’s own private brand while building a robust e-commerce platform. “That’s our focus now,” Lim said, “and in 2018, we will work on opening new doors.”

But knowing this pair, they won’t be conventional stores. “We’re reimagining what stores mean,” Leon said. “They’re not going to be cookie-cutter.”